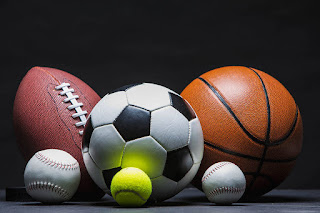 Life is slowly returning to normal. Shops are re-opening, people are going back to work, and they’re even over-crowding our beaches, even though the government’s science bods have told them not to.

Sport has also returned. Golfers are doing their thing, international cricket is coming back soon, and football is on our screens every day until they’ve caught up and finished the season. So what better time is there to sit back and listen to a Mix Tape consisting of sporting-related songs?

This Mix Tape contains songs that were especially written for sports shows and sport-related productions, as well as songs that were adopted by fans and that are chanted at arenas around the world. There’s also a few theme tunes from British television shows that you might remember, including the classic Indoor League! (Hey! Don’t laugh, that was a sport’s show as well!)

Sadly, although there’s quite a few football-related songs here, including the classic Three Lions, you won’t find any songs recorded by football teams or by individual players. There just wasn’t enough room. But who knows, maybe there’ll be a Mix Tape along soon where you can here about the Tottingham area of London, or hear Gordon Banks reminisce about being back home with his friends and family.

Don't forget you can listen to the previous mix tapes and my podcast over at https://www.mixcloud.com/julian-radbourne/
Posted by Julian Radbourne at 23:22:00