What is The Two Sheds Review? 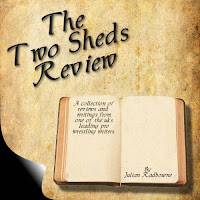 The Two Sheds Review began way back in June 2000 when my first online column, a look at The Radicals entry into the WWF, was published by The Wrasslin' Analysis newsletter, which had a massive subscription of 143 readers.
In the weeks and months that followed my ramblings began appearing in other newsletters, including the Daily Smackdown, The Chokeslam Newsletter, The 316 Report, Powerbomb Wrestling News and a one-off shot in the ECW-themed 2 Extreme Newsletter.
Things didn't really take off until early 2001 when we finally got full internet access. Up until then I'd used the BT/Talk 21 e-mail system through my Sky Digibox. Getting onto the web opened up a whole new world to me, and I was able to get my work published on various websites for the first time. Some of these sites included Pro Wrestling Columns, Smash Wrestling, Wrestle-Zone UK, The Balrog's Lair and many more.
It was also in 2001 I attended my second professional wrestling show, the World Association of Wrestling's Fightmare show at the Norwich Sport Village. After getting an insight into the way that British wrestling business worked I was taken on by WAW to run their website and to handle their internet operations in December of that year. It was a post I held until I left the company, for personal and professional reasons, in November 2005.
In 2002 I broadened my horizons by adding mixed martial arts reviews to my website, beginning with the Ultimate Fighting Championship's first show at the Royal Albert Hall. Since then I've taken a great interest in the MMA world, and I've reviewed shows from all over the world since then. If truth be known (and don't tell anyone else) I actually prefer MMA to professional wrestling at the moment!

I've also been mentioned in the local and national press. My collection of WAW articles was reviewed by the Norwich Evening News and Fighting Spirit Magazine. I was also asked to contribute to an article in the Eastern Daily Press following the death of Jackie Pallo. It was too big to fit in my scanner though!

The Two Sheds Review was also plugged on The Wrestling Channel show The Bagpipe Report.

As for the name, Two Sheds originally came from an old Monty Python sketch about a composer called Arthur "Two Sheds" Jackson. He was called "Two Sheds" because he had two sheds. A few years later while creating a wrestler for myself in the WWF Attitude game for the Sony Playstation I scrolled down a list of names that included the likes of The Wolverine and The Crippler. Down at the bottom was "Two Sheds", so my wrestling avatar became known as Two Sheds, and it was kind of funny to hear Shane McMahon and Jerry Lawler scream out "Two Sheds is screwed!" When I began writing about wrestling a couple of years later it just seemed to fit. (Before you ask, yes, I do. I do have two sheds. I don't do any writing in them though, because they're both full of junk.)
As well as articles about wrestling and MMA this site also contains articles about boxing, kickboxing, football, cricket and more. I've been a lifelong sports fan, so it only seemed natural to write sports I've been watching for years.
A recent addition has been some my old stories. Some of these were co-written with my brother Paul over 20 years ago and have laid dormant in old folders since then. It will take a while to get them all on this site because I've got to type them up again. They were originally written using a typewriter (remember them?) that didn't even half a key for the number 1! I'm hoping to give my fictional universe a re-boot soon. Hey, DC Comics have done it loads of times over the past 25 years, so why can't I?

In my "real life" I was born in the Norfolk and Norwich Hospital on November 8th, 1971, the youngest of ten children born to William and Doris Radbourne. I've lived in the Norfolk coastal town of Cromer all of my life.
By day I'm an unemployed retail worker, having worked in that particular industry for over 10 years. Having done numerous boring jobs for years I finally found my niche as it were when I got a job working in a local garden centre. I can't explain why but I just love working in retail. Maybe it's because of the wide variety of people you get to meet.
I'm an avid Norwich City supporter. My heroes include the likes of boxing legend Muhammad Ali, footballing great Pele, cricketer Ian Botham, guitar legends Ritchie Blackmore, Eric Clapton and Jimi Hendrix, Stan Lee, the brains behind Marvel Comics, Gene Roddenberry, the Great Bird of the Galaxy" and creator of Star Trek, and Kevin Smith, the man who gave Jay & Silent Bob to the world.
Anyway, that's enough of this stuff. Please feel free to browse through the hundreds of articles, reviews and stories on this site, and to leave a comment or two. Just be nice though, and remember that rude and insulting comments won't see the light of day.
JULIAN RADBOURNE
13th June 2011