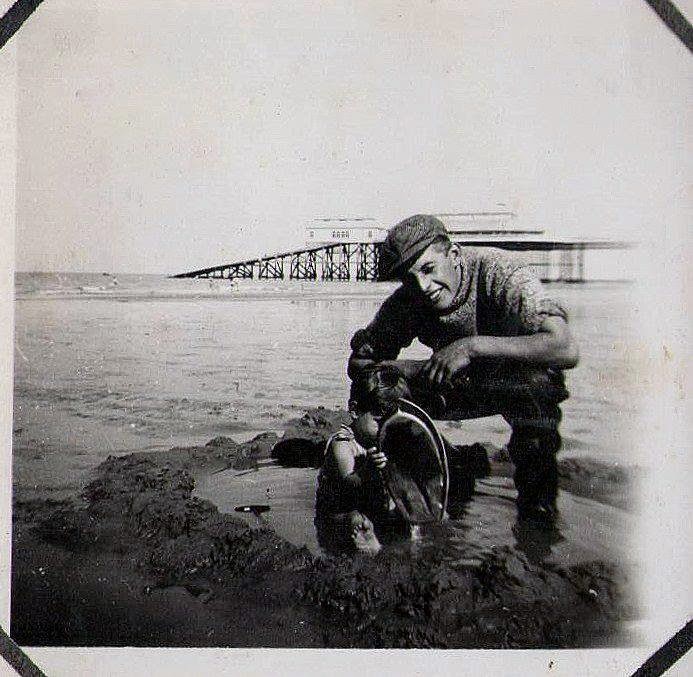 I recently posted the following on Blogg's Blog as part of my work for the RNLI Henry Blogg Lifeboat Museum here in Cromer. As that blog is only really intended for the volunteers and staff of the museum I thought it would be a good idea to post it here so my regular readers could see it as well.

When we were putting this blog together one of the first ideas we had was to ask you if you could submit photos for an online gallery designed to coincide with our 1950’s Fashion Exhibition.

So I set about looking through the various photos I had, hoping I could find some shots of my family in the 50’s, and while I found countless old photos of Mum, Dad and various other relatives from around that time I wasn’t sure if they were from the 50’s, and I couldn’t ask the people who would know because they were no longer around.

There was only one photo I was entirely sure about.

The photo you can see here is of my uncle, Ted Bussey on Cromer beach. The young boy with him is a chap by the name of Paul Sibellas. Paul posted this photo on Facebook, and he allowed me to make a copy for my online family album. However, there is a tinge of sadness whenever I look at this photo.

In June 1953 Uncle Ted was working on the crab boat Boy Jimmy along with Frank and Jimmy Davies when the boat capsized fifty yards from the shore. The boat had been caught in an undercurrent and was completely engulfed by the wave, taking all aboard under the water. Neither the Davies brothers or Uncle Ted survived.

Many watched on in horror from the beach and the cliffs, including Henry Blogg, who helped launch the only crab boat on the beach at the time. But by that time his health was failing him and the effort proved too much for him when he collapsed near the water’s edge.

Standing on the cliff witnessing these events was Uncle Ted’s pregnant wife Rhoda. In her younger days she’d been a championship-level swimmer, and she had wanted to swim into the sea to try to attempt a rescue, until others stopped her because of her medical condition.

Uncle Ted was buried in the cemetery on Holt Road in Cromer. When Mum died thirty years later her ashes were buried nearby, as were Dad’s when he died in 1991.

The events surrounding the deaths of Uncle Ted and the Davies brothers were captured perfectly by Cyril Jolly in his book Henry Blogg of Cromer. The Eastern Daily Press also paid tribute on the 50th anniversary in 2003. There was a great photo of my Uncles Tich and Charlie looking out to see, paying tribute to their lost brother.

I never knew Uncle Ted, but I certainly knew of him. I’ve heard countless stories through the years, and each one of them showed just how much he was missed, even decades after his untimely passing.