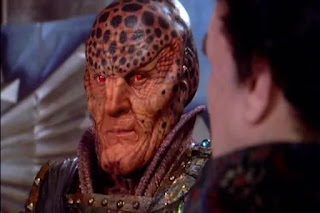 Across the hills of New Zealand’s North Island Kathryn Janeway walked, towards the main correctional holding facility on the island. Her main task was to see former Starfleet office Tom Paris, but first she had other matters on her mind, someone else to see, an old and very dear friend.

Arriving at the facility she was taken to a room. Upon entering she saw the old friend, someone she had known since her days at Starfleet Academy, James Watt.

Watt immediately got to his feet, and the two of them hugged. A tear formed in the corner of Janeway’s eye. Watt wiped it away with his handkerchief.

“Oh Jim! What have they done to you?”

“Only what the Cardassians, the Minbauri, the Monstrons and the Empire couldn’t do! Come, sit down. I know we don’t have much time, and that the hospitality isn’t that good, but at least we can talk.”

They seated themselves at the table. Janeway kept a tight hold of Watt’s hand.

“Have you heard the rumour?” she asked. “They say that Jeff and his crew have gone to the Pegasus, under the banner of the Free Federation.”

“Being in this place you don’t hear many rumours.”

Janeway let go of Watt’s hand and thumped the table.

“Damn it Jim! This isn’t right! Your record is exemplary! Why is Starfleet doing this?”

“The rumour in here is that it isn’t Starfleet. Someone higher up is involved in all of this!”

“I’ll promise you this Jim, when I get back I’ll get to the bottom of this!”

“That’s the other reason I’m here. My chief of security, Tuvok, has gone missing. He was working undercover with the Maquis when his ship went missing in the Badlands. The Cardassians claimed to have destroyed it. I’m here to recruit an observer. You might know him – Tom Paris.”

“We met young Mister Paris as soon as we arrived. He gave Sutek and I a warning, that someone in here could be looking for a prize scalp!”

Then a knock came at the door. It was a signal for Janeway.

“I’ve got to go Jim. They only allowed me a few minutes with you. But before I go remember my promise.”

Janeway then reached to her neck and took off a small necklace with the Starfleet emblem on it. She handed it to Watt, who smiled.

“This is the necklace I have to you after we graduated. I wonder if Jeff still has his.”

“I’m sure he does. He’s probably still wearing it now, on the Pegasus.”

Janeway stood up and placed a kiss on Watt’s cheek.

Janeway then walked towards the door, and the guard let her out. For the first time in a long while Watt felt some hope.
In his quarters Ambassador G’Kar sat, a drink in his hand, going over in his mind the events of the day. Then his thoughts were interrupted when the door buzzer sounded. He was not happy at his interruption, and he made it clear when he called the visitor to enter. The visitor, however, was a solemn looking Na’Toth.

“I bring news from our colony along the Centauri border Ambassador.”

Na’Toth handed the pad to G’Kar, who quickly read it. His expression changed from annoyance to one of sadness.

“Na’Toth, ask Captain Sheridan to call a meeting of the Babylon 5 council.”

“But it is late in the evening Ambassador. Can this not wait until the morning?”

“This is a communication from our government. It must be relayed to the council at once.”

“Very well Ambassador. I will try.”

Na’Toth left G’Kar alone, and as soon as she had gone G’Kar slumped back in his chair, the data pad slipping from his hand, the news from his government weighing heavy on his shoulders.

Tom Paris was busy with his work, serving the Federation the only way he could at the moment – by working in the camps on New Zealand. As he crouched down, took in hand, repairing some system that had malfunctioned, he failed to notice the figure arrive on the platform above, until he heard a voice.

Paris looked up, and standing up he saw a woman dressed in a black and red Starfleet uniform standing above him.

“Captain Kathryn Janeway. I’d like to speak to you for a moment. The Federation has a job for you.

“I’m already doing a job for the Federation.”

Janeway got down a nearby ladder so she was now at eye level with Paris.

“Can we talk anyway?”

They started to walk through the countryside. Janeway began to think to herself how the surrounding area did not resemble a penal colony one bit.”

“So what’s this job you have for me Captain?” Paris asked.

“A few days ago a Maquis ship went missing in the Badlands.”

“And what does that have to do with you?”

“My chief of security was working undercover on that ship.”

“Have you ever thought that it’s just your chief of security that’s gone missing?”

Janeway stared at Paris. The thought had crossed her mind, but she dismissed the notion instantly.

“So what’s my role in all of this?” Paris asked.

“I believe you knew one of the crew of the missing ship, a former Starfleet officer named Chakotay.”

Paris came to an abrupt halt.

“Chakotay? Yeah, I know Chakotay. We didn’t get along too well. While Chakotay will tell you that he left Starfleet on principal, to defend his home colonies, he’ll sat that I was forced to leave, and would work for anyone who was willing to pay my bar bills. And he’d probably be right. So tell me about your ship Captain. So far I haven’t seen a starship capable of going into the Badlands.”

“And tell me, what do I get out of this little mission?”

“The rest of your sentence will be terminated, and after this mission Starfleet will cut you loose. You can continue your career with Starfleet or go a separate way. You’ll be officially classed as an observer.”

“Observer? Are you kidding? Hell, I’m the best pilot you can have!”

“You’ll be an observer, and that’s all!”

Paris began to stroke his chin while he considered his options.

“You’ve got yourself a deal Captain.”

The council chamber on Babylon 5 was a hive of activity during this late-night session. At G’Kar’s request the council members and senior officers had gathered for a reason not yet known to them. Then, moments later, a solemn-looking G’Kar entered the chamber, the communication from his government in his hand.

“May I have your attention please.” he said slowly. “As you all know, forces of the Centauri Republic have launched an assault on the Narn colony along the border. Almost four million Narns were killed in the vicious and fatal attack. It is because of this that I know relay this message to you from my government. As of this date the Narn Empire declares war on the Centauri Republic.”

Putting the communication on the table in front of Sheridan G’Kar left the chamber, leaving all save Mollari stunned. Babylon 5 had originally been built to keep the peace. That had been it’s sole purpose, it’s sole mission. It was this mission it had now failed.