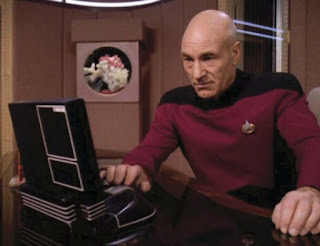 Admiral Calevicchi sat in his officer at Starfleet Command making the final travel arrangements for his journey to the Kabriegny Object. After making the final checks on his computer the Admiral turned to one of the many data pads that covered his desk. Then a loud buzzing nose emanated from his console.

Suddenly the data on the console screen vanished. Then, moments later, more words appeared on the screen.

“For the attention of Admiral Albert Calevicchi, Starfleet Command, San Francisco, Earth – Urgent – Must gain passage to Nimbus III – Is vital you attend talks there – is vital you tell no one of this transmission – Transmission ends.”

The message stayed on his console screen for a couple of minutes until it was replaced by the previous data. The Admiral tried to operate his console in an attempt to get the message back but he could not. He could also find no trace of any transmission that may have been made to his office. His mind began to think. Why did someone want him on Nimbus III? And would it stop him from his important rendezvous?
The Romulan Warbird Bak’Ra drew up alongside the U.S.S. Defiant. In the transporter room of the Defiant Commander Sisko stood next to General Hague, awaiting the arrival of their Romulan visitor.

“I’m not sure this is a good idea, working with the Romulans.” said Sisko. “They’ve hardly been trustworthy in the past!”

“Things change Commander.” Hague replied. “After all, before he was killed President Watt wanted to negotiate with them in an effort to ease tensions that have existed for nearly two centuries.”

The transporter beam soon energized, a stern-looking Romulan female soon stood before them, a cloaking device in her arms.

“Welcome aboard. I am General Hague, Starfleet Command-in-Chief, and this is Commander Benjamin Sisko, who will be leading the mission into the Gamma Quadrant.”

“I know who you both are. I am Sub-Commander Toru. I am to supervise the installation of the cloaking device. Do we head directly to Deep Space Nine afterwards Commander?”

“Yes Ben.” Said Hague. “The only way we could get the cloaking device for this mission was in a trade. The Romulans are to get any information you discover about the Dominion.”

“I am also to supervise the operation of the cloaking device.” said Toru. “Until I am sure you will not try to copy it’s technology.”

“You have my word on it, Commander Toru.” said Hague. “Now, if you’d like to start your work.”

Hague motioned to the transporter operator to show Toru to Engineering. Once they had gone Sisko turned to Hague.

“You didn’t tell me anything about this.” he said. “So you’re telling me that after we finish this trip Romulan cronies will come and interrogate my staff?”

“It’s not like that Ben. Ambassador Spock’s work with the Romulans has broken new ground in relationships between our two governments. Without him none of this would be possible. And you must remember the Dominion not only threatens the Federation it threatens everyone in the Alpha and Beta Quadrants, the Klingons, the Cardassians, everyone.”

“You won’t be going there just yet. Just before Commander Toru beamed aboard I received a transmission from the Ferengi homeworld. The Grand Nagus wants to see you about your mission.”

“A wise move I believe. After all, the Ferengi were in trade talks with the Dominion.”

“Perhaps Quark will be some use after all!”

The bridge of the U.S.S. Enterprise was it’s usual hive of activity as it moved along the Federation/Sontarran border on a routine mapping mission. This was the furthest they had ever been, and the nearest they could ever get to the nearby Delta Quadrant.

Commander Data sat at the science station, the transmission from Magus on the screen before him. It had been some time since the Enterprise’s encounter with the Flying Scotsman, and the android had still not been able to decode Magus’ transmission.

In his ready room Picard sat reading one of his many Shakespeare novels until a call came through from the bridge. It was from Riker asking him to join him. A few moments later he stood with Riker and Work at the tactical station.

“What is it number one?” Picard asked.

“We were conducting a routine scan of the nearby Denara Belt when we picked up something odd.”

“There appear to be several vessels in the belt.” said Worf. “How many we cannot tell, and of what sort we don’t know. The magnetic interference is blocking our scans.”

“Why would anyone want to hide there?” asked Picard.

“Probably to avoid detection.” Riker replied. “It’s probably just smugglers or something, or perhaps the Sontarrans on some sort of exercise.”

Then Worf’s panel came to life.

“Captain, I am receiving a coded transmission for you/”

A minute later Picard seated himself at his desk.

The console screen went blank. Then a message appeared.”

“For the attention of Captain Jean-Luc Picard, commanding officer, U.S.S. Enterprise – Urgent – Must gain passage to Nimbus III – Is vital you attend talks there – Is vital you tell no one of this transmission – Transmission ends.”

Picard was intrigued. The transmission was sent to him on a coded channel, only something that Starfleet could do. But why would Starfleet want him to go to Nimbus III? The Federation had given up on the failed colony over fifty years ago. It was then that Picard activated his communicator.

“Picard to Worf. Where was that transmission coming from?”

“The signal was sent through several sub-space relay stations from all over the quadrant. It is impossible to tell where it originated from.”

Picard sat back in his chair, his mind racing with the possibilities. Who could have sent the transmission to him?

With Tom Paris having gone on ahead to Bajor to be fully briefed on his mission Captain Janeway sat in her ready room making her final preparations for her trip to the Badlands. After making some checks with her first officer, Lieutenant-Commander Cavett, she was about to make a log entry into the computer when her computer suddenly started making a buzzing noise. She wondered what was going on. The new bio-neural cells should not have been acting up in this way. She was about to call the bridge via her communicator when a message appeared on the screen.

“For the attention of Captain Kathryn Janeway, commanding officer, U.S.S. Voyager – Urgent – Must gain passage to Nimbus III – Is vital you attend talks there – Is vital you tell no one of this transmission – Transmission ends.”

“How the hell did this get through?”

“Janeway to Cavett. Where did this transmission come from?”

“The one that’s on my screen.”

Janeway looked at her screen and it was blank. The message had gone.

“Captain? Are you alright?”

“It was probably nothing. Just somebody playing a joke I guess.”

Janeway then turned off her console. She had no time to go to Nimbus III. A more important appointment awaited her in the Badlands.

The Cherokee burial grounds in the heart of their territory had been a favourite place of Duncan McCloud’s for over five hundred years, and for much of that time he had been allowed to keep a dwelling there, a log cabin. It was primitive by twenty-fourth century standards, but McCloud considered it home, a place he could go to forget his worries, and at the moment he had quite a few of them.

Seated in an old armchair McCloud flicked through the pages of one of his old diaries, detailing his first few months as a member of Anglo-Force over three hundred years previously, most notably his trip to the island of Ikotia. Then his attention was diverted from the book by a noise from the only piece of modern technology in his cabin, a computer.

Putting the book to one side McCloud walked over to the computer, and a message suddenly appeared on the screen.

A smile appeared on the Highlander’s face. Unlike others who had received a similar transmission McCloud recognised the style and the content. He knew who had sent it. Switching off his console McCloud walked to his bedroom and began to pack.