The Journeys of Magus - Chapter Three 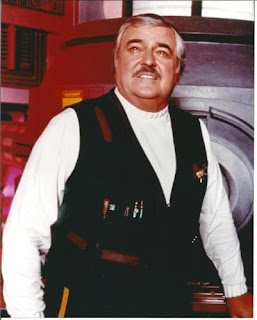 The room was a mess. It looked like it hadn’t been cleared up for ages. Bits of computers and various engineering parts were scatted all over the place. You could hardly tell that someone lived in this mess, but live in it they did. The occupant of this particular dwelling was a retired Starfleet officer, and he lived here alone. On this day he sat at a computer terminal, the image of a starship warp coil chamber on the screen in front of him. He worked the computer as if he had been around them for ages, which he had. The only time he looked up was when he heard a noise outside his front door. He quickly picked up an old type phaser which was on a nearby table. Slowly he walked towards the door, phaser at the ready. Then he heard the noise again. There was definitely someone outside, but who? He hadn’t had a visitor in ages. He was now at the door and he pressed the panel next to it. The door suddenly opened and he pointed his phaser outside. There was indeed someone outside, two people in fact, and they didn’t take too kindly to having a phaser stuck in their faces. All the same, they raised their arms.
“Come now Scotty! Is that any way to greet an old friend?”
The phaser was soon lowered as he recognised someone he had seen only a few months ago at the presidential inauguration.
“Magus! You bloody fool, you scared me half to death!”
The two old friends hugged each other, and broad smiles appeared on their faces.
“What are you doing here?” asked Scotty. “Is the Valkyrie here as well?”
“I’m afraid not. I’m here on my own.”
Magus turned towards his companion.
“May I introduce to you Drathro of the planet Gallifrey. Drathro, may I introduce one of the finest engineers ever to wear a Starfleet uniform, Captain Montgomery Scott!”
“Gallifrey?” said Scotty. “You mean you’re a Time Lord?”
“It would be more correct to say that I am a Time Lord in training.” replied Drathro.
Scotty suddenly slapped his forehead.
“Where are my manners? Please come in, sit down…if you can find somewhere to sit down!”
Scotty showed Magus and Drathro into his home, and after clearing away a few diagrams and schematics they soon found somewhere to sit. Scotty then poured his guest a drink. Drathro looked at the liquid in his glass.
“Pardon me for asking, but what is this?”
Scotty looked at Magus, and Magus looked at Scotty. They then burst out laughing.
“Am I missing a joke here?” Drathro asked.
“It’s nothing!” said Scotty. “It’s Aldebran whisky. I developed a taste for it in Ten Forward.”
Scotty then turned to Magus.
“So tell me, what’s a wizard doing in this neck of the woods? Are you on a diplomatic mission for Starfleet or something?”
“I’m afraid not. I resigned from Starfleet yesterday. I’m undertaking a new career of sorts. I take it you’ve heard about the recent talks between the Federation and Gallifrey?”
“Aye, I have, but what does that have to do with anything?”
“Young Drathro here has been chosen as the first Gallifreyan ambassador to the Federation, but at the moment he is a bit round around the edges. I’m going to tutor him in the ways of the universe!”
“And you want my help? I’m no teacher.”
“I don’t want a teacher. I want an engineer, the best engineer.”
“What do you want a bloody engineer for?”
“To tutor Drathro in the ways of the universe we are going to travel through that universe. Starfleet has agreed to give me an old Oberth-class ship. I need you to help me with a new form of propulsion I’ve been working on. It involves using cavourite instead of dilithium crystals.”
A broad smile appeared on the Scotsman’s face.
“It just so happens that I’ve been working on something similar. Come over here.”
Scotty showed them to his computer and the technical diagrams he had been working on. Magus studied the readouts.
“Remarkable. You’re work is very similar to my own. Perhaps we could combine our work. Of course it would mean you’d have to leave your home. What I have in mind will take us all over the place.”
“To be perfectly honest, I hate it here. This place is for old men to retire, old men who are useless. I feel far from useless.”
“You mean you’ll come with us? Excellent! When can you leave?”
Scotty reached down behind one of his chairs and pulled out a small case.
“I’m packed already!”
“Good! We leave for Qualor II tonight!”

The trip to the scrap depot at Qualor II began that evening, with conditions in the shuttle-craft somewhat cramped to begin with. At maximum speed the trip to the depot took some seven and a half hours. During the trip Magus and Scotty discussed their engineering theories with each other while they left young Drathro to pilot the shuttle by himself.
The sight of all the old ships in the yard seemed to make Scotty a little uneasy.
“I never like coming to these places.” he said. “Gives me the willies seeing ships in this state!”
“Hopefully we’ll be able to reverse the process for one of these old girls.” said Magus.
“Doctor, we are coming towards the main station.”
“Excellent. Please open a communications channel to the quartermaster’s office.”
Drathro did as he was asked and the image of a middle-aged Zakdorn man appeared on the small screen in front of Magus.
“Good afternoon.” said Magus. “Mister Dockachin I presume.”
“Door-car-chin.” the Zakdorn replied, seemingly annoyed at the way Magus pronounced his name.
“My apologies.” said Magus. “My name is Doctor Phineas Magus. I believe President Watt spoke to you about me.”
“Oh yes. You’re the fool who wants to try and salvage one of the old ships here. He told me you wanted an Oberth-class starship. I’m afraid we’ve only one in this yard. It’s in pretty poor condition. I doubt if you’ll ever get the thing going again.”
“I hope to prove you wrong sir. If you give us the coordinates of the vessel then we’ll start our work.”
“I’ll have to come along with you.”
“Very well.”
Magus waved his hand and Dockachin suddenly appeared in the passenger’s compartment begin him. The Zakdorn was most distraught.
“Welcome aboard.” Magus smiled.
“How did I get here? There was no transporter beam.”
“I will explain momentarily. Now, if you’ll gladly take the con and we’ll soon be on our new ship.”
A few minutes later the shuttle neared an old Oberth-class starship.
“You can’t be serious!” said Scotty. “That bucket of bolts?”
“As I said.” said Dockachin. “It’s the only Oberth ship we have. It’s this or nothing!”
“This will do.” Magus smiled. “Anyway Scotty, you have the reputation of a miracle work to uphold!”
“So did Jesus, but he couldn’t bring back the dead!”
Scotty, Drathro and Dockachin put on breathing apparatus and they soon arrived in the engineering section of the old ship. Scotty walked over to one of the panels.
“There’s some power in here, but not much. Just enough for the lights and minimum life support.”
“Which will have to do.”
Then the lights came on and they removed their oxygen masks. Scotty looked around.
“Well it’s better than nothing I suppose.” he said.
He walked over to the dilithium crystal chamber and opened it. There were small fragments of crystal inside the chamber. He then felt around the edge of the chamber.
“The casing is still intact, and I might be able to get some juice out of these fragments.”
“Enough to get us to the Time of Legends?”
“I suppose, but it’ll be risky!”
“Come Drathro, let’s take a look at the bridge.”
“But the turbo lifts aren’t working!”
“Then we’ll have quite a climb!”
Minutes later they arrived on the bridge. Drathro and Dockachin were out of breath. Magus hadn’t even broken a sweat.
“Well, this will do.” said Magus. “The surroundings are not to my taste, but that will have to do also.”
Drathro walked over to the navigator’s panel and brushed off the dust with his sleeve.
“There seems to be some life in this thing.”
“I hope to.” said Magus. “Because that will be your station.”
Magus then walked over to the captain’s chair and frowned.
“Oh no. This just won’t do.”
He waved his hand across the chair and it began to change, replaced a few seconds later with an old-style rocking chair.
“How did you do that?” asked Dockachin.
“Magic!”
Magus then seated himself in the chair and looked around the bridge.
“I think I’m going to quite like it here!”
Posted by Julian Radbourne at 01:30:00