The Journeys of Magus - Chapter Four 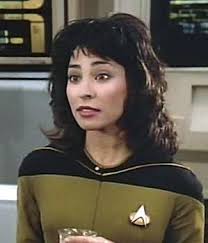 Commander James Winthorn sat in the Suffield Park pub in Cromer, still on shore leave and gazing into his glass of beer. Ever since he was rejected for the post of first officer on the Valkyrie he had been in a slight depression. He wondered where his career was going. He thought he had a better chance than anyone of getting that posting on the Valkyrie because he had served aboard her before and knew that ship like the back of his hand.
As Winthorn sat brooding he suddenly felt a hand on his shoulder. He could tell instantly that it was a woman’s hand. He turned round to see an attractive young woman wearing a Starfleet uniform smiling at him. It was someone he hadn’t seen in ages.
“Sonya Gomez, what are you doing here?” he smiled.
“Celebrating my promotion to lieutenant, and taking a bit of shore leave before I go to my next assignment, whatever it is!”
“So am I.”
Winthorn began to brood again.
“I heard about you getting turned down for the first officer’s post on the Valkyrie. Tough break.”
“Tell me about it.”
“But I can understand them giving it to Sutek. He does know the ship, and I think it’s always good to promote from within.”
Winthorn stared at Gomez.
“You’re doing it again! Running on like a fifty cent watch!”
“I know, but at times I just can’t help myself!”
Then they heard a coughing noise behind them. They expected to see a burly looking man trying to get a drink, but instead they saw a man in the uniform of a Starfleet admiral.
“Admiral Calevicchi!” said Winthorn. “I didn’t know you where here. Can I get you a drink?”
“No thank you Commander. I came here looking for you, and for you Lieutenant Gomez. What are you doing tomorrow morning?”
“Nothing.” replied Gomez. “We are still waiting for our postings.”
“Good. Meet me outside the President’s office at oh-nine hundred hours.”
“The President’s office?” said Gomez. “In Paris?”
“The same one. He’d like to have a word with you about something, about your next assignment.”
“What about it?”
“I’ll let him explain. Good evening to you.”
The Admiral then left them to their drinks. Gomez smiled.
“This is great! Looks like we could be together on our next assignment!”
Winthorn took his glass to his mouth.
“Yeah, great!”

Scotty stood in the engine room of the old starship and looked worried.
“Scott to Magus. We’d better get to the Time soon or we’ll be like a dead duck in the water!”
On the bridge Magus looked at Drathro.
“How long until we arrive?”
“Five minutes.” Drathro replied.
“Can the crystals last for another five minutes?” Magus asked.
“If they don’t I’ll be more than happy to go out and push!” said Scotty.
They just made it. As Drathro put the ship in orbit near the Pegasus station the engines died. Only lighting and life support remained.
“Thank you Mister Scott.” said Magus. “Your reputation remains intact!”
“That’s more than I can say for my nerves!”
“Drathro, open a hailing frequency to the station.”
The image of Lieutenant Colonel Archer Greenleaf, the first officer of the Pegasus station, appeared on the screen in front of him.
“It’s good to see you again Archer. I hope your new assignment is to your liking.”
“Yes Ambassador…I mean Doctor. What can I do for you?”
“For starters I would be grateful if you could lend me one of your engineering teams so we can try and get this old girl up and running. Then I’d like to use one of your transporter rooms so I can beam a few things aboard.”
“Anything you wish Doctor. The engineering team will beam aboard shortly. We’ll beam you aboard the station soon afterwards.”
“Excellent. Magus out.”
The screen went blank and Magus got to his feet.
“Drathro, you have the bridge…whatever there is of it! Tell the engineering team to report to Mister Scott in Engineering. If you want me I’ll be at the castle.”
“The castle sir?”
“Craigmillar Castle of course. I have to debrief some of our crew!”

Shortly afterwards Magus strode into the main hall of his castle. He was greeted by Teddy and Toby., While Teddy sat and looked quite dignified Toby jumped around like a mad thing.
“I trust your trip in the Tardis was to your liking?” Magus asked.
“Yes.” Teddy replied. “The Doctor is quite a nice fellow. I often wonder why he always surrounded himself with whining females though.”
Magus walked into the study.
“Where is Belvedere?” he asked.
“He has been working in the cavourite mine as you asked.” Teddy replied. “He’s already come up with two loads.”
“Good. Contact the station and ask them to beam it aboard the ship. Scotty will know what to do with the crystals. I just hope the engineering teams won’t be that long.”
“Now come on Phineas!” said Teddy. “I saw a view of the ship when it was relayed from the Pegasus. IT looks like a wreck!”
“It may be a wreck but it will soon be one of the finest ships in the galaxy. Now I’ve got to think of a name. Lord of the Isles is out because that was my last ship.”
Then Toby got to his back legs and placed his front paws on Magus’ desk. He smiled broadly and his tail wagged wildly.
“Flying Scotsman! Flying Scotsman!”
Magus stroked his beard and then snapped his fingers.
“Toby my boy that’s it! You may have little inside your cranium but sometimes you can be a genius!”
Magus reached into his desk drawer and took out a small piece of chocolate. He threw it at Roby and it bounced off his nose towards the fireplace. The Labrador bounded after it, knocking over a small table until the sweet was in his mouth, and a second later in his stomach. Teddy shook his head.
“Manners maketh man, but it skipped dogs!”

Winthorn and Gomez stood nervously outside the President’s office. Neither of them had any idea what was going on. Then the door to the office opened and Admiral Calevicchi stepped out.”
“Good, you’re both here. Will you come inside?”
The two officers followed the Admiral into the office. There they saw President Watt looking at a computer screen.
“Ah, Commander Winthorn, Lieutenant Gomez, please take a seat.”
They seated themselves in chairs opposite the President. The Admiral sat next to them.
“I suppose you’re wondering why I asked you here.” said Watt.
“Yes sir.” said Gomez. “We were just saying…”
Winthorn stared at Gomez.
“Sorry Mister President, please go on.”
“You may have heard that Ambassador Magus is going on a special sort of assignment, one that involves the Federation and the planet Gallifrey. At the moment he is outfitting a ship at the Pegasus station. His crew is very sparse, and for this reason I would like you two to go on this assignment with him.”
“Us?” said Winthorn. “Why us sir?”
“Well, for a start, Magus was asking about you Commander.” said Watt. “He was very impressed when you served with him on the Valkyrie. As for you Lieutenant Gomez I feel that his ship will need two engineers. After all, Mister Scott may have the reputation of a miracle worker but even he has his limits.”
“Scott?” said Gomez. “As in Captain Montgomery Scott?”
“The same one. The decision of course is entirely up to you. You Commander Winthorn would act as his first officer. There is a great deal that both of you could learn on this mission.”
“Well you won’t have to wait for my answer sir.” said Gomez. “I’ll take it!”
“Excellent Lieutenant.” said Watt. “And what about you Commander?”
“I don’t know. This isn’t exactly what I was looking for!”
“Come on Jim!” said Gomez. “It will be fun!”
“When would we leave?” asked Winthorn.
“The transport ship leaves at fourteen hundred hours tomorrow.” said the Admiral.
“Then I’d better go and get pacing then!” said Winthorn.
“Good.”
Watt got to his feet and shook both of them by the hand.
“Good luck on your new assignment. You can pick up your briefing orders from Commodore McCloud.”
Winthorn and Gomez soon left the office. The Admiral turned to Watt.
“You made a good decision there sir.” he said. “Those two can go far in this service.”
“I just hope they can keep an eye on the old fool.” said Watt. “You know what sort of trouble he can get himself into!”