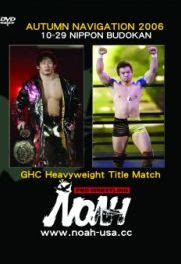 We’re going to stick with the Pro Wrestling NOAH theme for this review, but this time we’re going right into their backyard, with a look at Autumn Navigation 2006, held on 29th October at the Nippon Budokan. This is the first full NOAH show I’ve seen since Navigation With Breeze was broadcast on The Wrestling Channel back in 2004, and this is also the first NOAH show I’ve seen with English commentary, provided by Ken Hiriyama and Wally Yamaguchi, so at least I’ll know who all the wrestlers are!