XPW After the Fall - DVD Review 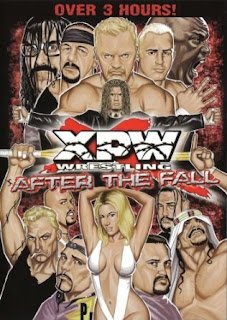 It was while visiting a Woolworths store in a nearby town before a job interview I came across a new DVD entitled XPW Wrestling: After the Fall. So, as I had never seen any XPW action before, and I’d heard a lot about this now defunct promotion, and as it only cost £4.97, I decided to give it a look see.

There’s no introduction here, so it’s straight into a tag-team match, with Steve Rizzono & Kid Kaos facing The Westsiders. Now this one was a little confusing, as we seemed to be getting two matches for the price of one, and heavily clipped ones at that. The first saw the Westsiders win after taking out Rizzono with their drive-by shooting move, a variation of the Hart Foundation’s old finisher. The second one saw Public Enemy arrive on the scene mid-match, which resulted in the match being given the music video treatment as all three teams attacked each other. This made things even more difficult to watch., and what was worse, the action stopped abruptly.

Then it’s quickly into the second match, Public Enemy v The Westsiders. It’s little more than a brawl as they break off into two groups here, one brawling in the ring, the other around the arena, which makes following the action a little difficult at times. Then it turns into another music video as the Pitbulls enter and turn it into a three team brawl. Thankfully, the music doesn’t last that long, and the normal commentary returns. There’s tons of tables stuff and chair shots, and a flaming table. It’s basically a mess, and not an entertaining one at that, that ends in a no contest.

We then get a look at the history of the XPW World title, and the early rivalry between Damien Steele and Big Dick Dudley, and later Chris Candido. It’s an interesting segment, and it’s a shame there’s not more of these on this DVD.

Returning to match action, as Chris Candido challenges Damien Steele for the XPW World title. It’s a falls count anywhere match, so we get even more brawling through the crowd. It isn’t too bad this time though, especially when both guys starting brawling on top of a bar, and Candido gets the pin after elbow dropping Steele from the top of the bar. He then makes it back to the ring before the ten second count to win the gold. Shane Douglas then makes a surprise appearance, and gives his usual impassioned speech towards the bosses of WCW. Needless to say that there are a few blue words here, but it is one hell of a promo.

Then it’s back to tag-team action, as the Westsiders and the Pitbulls got at it in a steel cage. It’s another heavily clipped match, which once again makes it difficult to follow the action. Eventually, the Westsiders win this poorly edited match.

Finally, we get what looks like a good match on paper, as Sabu defends the XPW World title against Terry Funk. These two literally knock seven sorts of you know what out of each other as they battle all over the L.A. Sports Arena, even demolishing the entrance way set in the process. At one point Funk throws Sabu off the stage onto the arena floor, before inflicting even more damage as they brawl through the crowd. After Sabu misses a leg drop through a table, Funk throws a fireball at Sabu, but in the end it’s Sabu who emerges victorious, getting the pin after clobbering Funk and branding him with his own iron. This was the best match of the collection so far, and proof that Funk still has/had what it takes to put on a good match. Sabu made a couple of mistakes, but it wouldn’t be a proper Sabu match if he didn’t make the odd mistake.

More singles action, with Kid Kaos facing Tracy Smothers in a loser leaves XPW match. Now the one thing that was really annoying about this match was that although there was commentary, the crowd and arena noise had been replaced by heavy metal music which could barely be heard. But apart from that it’s good match between the youngster and the veteran, with Smothers in particular impressing a great deal, showing just how underrated he is. After each many nearly got the pin on a number of occasions, Kaos got the pin after an inverted DDT off the ropes, saving his job in XPW.
Axl Rotten then faces Supreme in a steel cage death match. Rotten goes into the ring with a sickle, and uses it early on. Both guys bleed for their art as Supreme gets thrown onto a bed of thumb tacks (twice), a bed of nails, a barbed wire board, and a bed of light-bulbs outside the ring. Back in the ring, Supreme suplexes Rotten onto the thumbtacks, before coming off the top rope with a steel chair, and pinning Rotten as he still lay on the tacks. Not a bad match I suppose, mainly because it seemed a hell of a lot better than most of the other death matches I’ve seen.

This is followed by another match that looks good on paper, as XPW World Champion Sabu faces Chris Candido. It’s a fast paced one here, with Sabu looking better than he did in his previous outing, and Candido again showing just how good he was. Sabu almost loses the title after he gets clobbered with his own title belt by Rob Black, and misses a leg drop through a table when Candido moves out of the way. But Sabu later got the move right when he manages to leg drop Candido through the table at the second attempt. We then get an appearance from Abdullah the Butcher, as he clears house with his favourite weapon, while trying to get to Sabu. It’s a shame that this match wasn’t a little longer, as it had the makings of a classic.

Abdullah then makes a quick return, taking on Axl Rotten. There isn’t really much to write about this match. Abdullah stabs Rotten repeatedly with a fork, Rotten brings out a staple gun and puts several staples in Abdullah’s head, before the Butcher comes back and uses a coat hanger to choke Rotten, stabbing him several more times with the fork. It’s certainly not pretty to watch, and as the referee rules the bout a no contest, Sabu comes out and attacks the Butcher. This definitely isn’t the one for the wrestling purist, and one that I wouldn’t want to watch again.

Next up, more tag-team action Vic Grimes & The Messiah face Sabu and Homeless Jimmy. Originally this meant to be a two-on-one match with Messiah and Grimes against Sabu, with the XPW title on the line, but with Sabu taking a pasting, Jimmy, who had been fired from the company, came through the crowd with his shopping trolley and volunteered to be Sabu’s partner. What follows is an arena wide, weapons filled brawl as these two teams hit each other with whatever they can get their hands on. Messiah gets busted open for his troubles, and Grimes goes through two tables in quick succession, but the biased referee constantly favours the Messiah and Grimes, meaning that whenever Sabu and Jimmy go for a pin, the count is very slow, and getting a pin is impossible, until the end that is, after Sabu takes Grimes out with a third Arabian face buster, with the referee reluctantly giving the three count. Then, New Jack arrives, and beats the hell out of Grimes in a fight that takes in the entire arena. He even clobbers him with a Playstation, before stapling a dollar bill to his forehead. At a shade over forty minutes, this chapter of the DVD, while entertaining, and recommended if you like weapon strewn brawls, was a bit too long for more liking, and perhaps the New Jack/Vic Grimes segment could have been left off the DVD altogether.

The final match of the collection sees The Messiah challenging Sabu for the XPW title. This is the best match of the collection by far, with both men putting on a match with great moves, a great storyline, and filled with drama. Messiah really impressed me in this one, showing that he’s not just a death match wrestler, while Sabu put in a flawless performance. The drama came when Messiah took out the referee as Sabu tried to stop the attack on his manager Josh Lazie by Rob Black. Messiah then delivered a low blow to Sabu, and in all the confusion a second referee delivered a fast count as the Messiah was declared the new champion. However, the first referee came to, and because he’d been attacked, ordered the match restarted, with Sabu quickly finishing off his opponent after leg dropping him through a table, and then getting the title retaining pin. Then all hell broke loose as The Black Army dismantled Sabu, only to be chased away be none other than New Jack, who, armed with his many weapons, proceeded to clean house. Not even Lizzy Borden could escape the attack.

In conclusion - for the price I paid, this is a good DVD to add to your collection. While the clipped tag-team matches leave a lot to be desired, the majority of the singles matches were very good, especially the Candido/Sabu, Messiah/Sabu and Funk/Sabu.

One disappointing thing though comes in the form of the cover. Although they are clearly displayed, the likes of Raven, the Sandman, Justin Credible, Super Crazy, Jerry Lynn and Psicosis aren’t on this collection, although I understand that a two disc version is available through some websites. However, that doesn’t make up for the disappointment at not seeing them on the DVD.

But all in all, my first taste of the XPW product had it’s good and bad points, and if you can get hold of this DVD here in Britain for £4.97 in your local Woolworths shop, then you have got a bargain, and maybe the second disc of this collection will be released over here soon for a similar price. We can but hope.
at October 04, 2007