The Journeys of Magus - Chapter Five 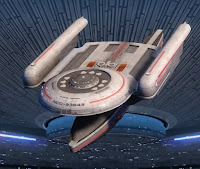 Scotty walked through the engineering section, tool belt strapped to his waist. He did not look a happy man.
“Careful with that crystal chamber!” he shouted. “And you! You’re using the wrong tool! I always say you should use the right tool for the right job!”
Then Magus strode into the engineering room. He clapped Scotty on the back.
“How are things going?” he asked.
“These bloody dwarves don’t seem to have the faintest idea what they’re doing!”
“Dwarves are considered the finest engineers in the galaxy!” said Magus.
“That may be so.” said Scotty. “But they can’t reach half the controls!”
“Just give them time Mister Scott.” said Magus.
A call came through from the bridge.
“Drathro here sir. We’ve just had a call from Starfleet Command. The U.S.S. Grissom is en-route. They’re carrying two of our crew members, a Commander James Winthorn and a Lieutenant Sonya Gomez. E.T.A. is in thirty hours.”
“Lieutenant Gomez eh?” said Magus. “Looks like you’re going to have a bit of help on our voyage Scotty!”
“I just hope she’s tall!”
Magus soon arrived on the bridge to see Teddy sitting at the communications station.
“I understand you still need a communications officer.” he said. “I would like to apply.”
“Application accepted.” said Magus. “Are you sure you can operate the controls?”
“I have asked the engineers to convert this station to voice control as well as manual control. I just hope I don’t have to wear one of those ear pieces.”
Suddenly the lights brightened considerably.
“Engineering to bridge.”
Magus pressed a button on the panel.
“Go ahead Scotty.”
“Full power has been restored. The chamber is ready to receive the crystals.”
“Good. Have Belvedere bring them up from the cargo bay. Drathro, you’re with me.”
Scotty and the young Time Lord soon stood in engineering and watched Magus put the cavourite crystals into what used to be the dilithium chamber.
“You have to be very careful with these things.” he said. “They can sometimes prove to be very lethal.”
The crystals in place, Magus closed the chamber.
“Computer, run full diagnostic on the warp drive, and include the new parameters concerning the cavourite.”
It was a minute later when they got the result of the check.
“Diagnostic and testing are complete. Warp drive in full working order.”
“So when do we test her?” asked Scotty.
“I’d rather wait until the others arrive. Drathro, please convey our gratitude to Captain Pendragon for his help.”
“Yes Doctor.”

It was well into the next day when Winthorn and Gomez arrived on board. Scotty seemed pleased to have a Starfleet engineer working by his side. On the bridge Magus and Winthorn entered.
“As you can see Commander we’ve had to do virtually a major refit.” said Magus. “The new drive system seemed to be the easiest however.”
They then approached the chair normally used by the operations manager.
“I’d like you to take this chair Commander.” said Magus.
Winthorn seemed a bit tentative at first, and then he took up his place. He seemed slightly put off by seeing a Border Collie seated in the communications chair and a robot butler at the tactical position. Magus, meanwhile, sat in his rocking chair.
“Drathro, please take us away at full impulse power. I want to put some distance between us and the Time before we try the new engines.”
It was twenty minutes later before Magus gave the order for the new drive to be fired up. In engineering Gomez looked at the new designs. She seemed to be in awe.
“I’ve never seen anything like this before!” she said. “How can this thing work?”
“Quite easily.” said Scotty. “At least I hope it will. Engineering to bridge. The engines are ready.”
“Thank you Mister Scott. Drathro, ahead warp one. Then take her steadily to warp five.
The engines began to come to life as the speed of the ship gradually increased.
“Now at warp one.” reported Drathro. “Warp two…three…four..now holding steady at warp factor five!”
“Mister Scott, you did it!” beamed Magus.
“No Doctor, it was your design!” said Scotty. “I just made a few modifications, that’s all!”
“Now we are up and running where shall we go?” asked Drathro.
“The Bonestall Recreation Facility on Starbase Earheart is holding a diplomatic and trade conference in two day’s time.” said Magus. “If you are to learn the ways of diplomacy Drathro it would be a good idea to start there. Set a course for the starbase. But first I must do something. It won’t take long.”
Magus raised his hand, and on top of the ship the old name began to change. The registry number stayed the same as the name “U.S.S. Flying Scotsman” appeared in place. Magus then took his seat.
“Now everything is ready and complete.” smiled Magus. “Engage Mister Drathro!”
The voyage had begun!