Refuge on Ikotia - Chapter One 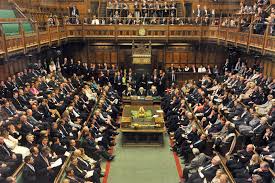 There had not been a debate in the House of Commons like this for years. The attack by members of Anglo-Force upon the Cyberdine plant was condemned by many members of Her Majesty’s official opposition. The most fervent critic was none other than Simon Harkes, the man responsible for pushing the Anglo-Force bill through Parliament in the first place.
“Never before have I heard of an attack by a government organisation on the property of an overseas company. I am disgusted by the acts of Captain James Watt and his men.”
The sound of many members shouting “here here” and waving their ballot papers sounded through the chamber. Then the Home Secretary, Simon Kennedy, rose to his feet and moved towards the ballot box.
“I find the right honourable gentleman’s view somewhat ironic.” he said. “Because it was him who pushed the bill to give Anglo-Force full government backing in record time. Now he condemns them! How two-faced can you get?”
Once again Harkes got to his feet.
“I do not dent the fact that I was responsible for giving Anglo-Force their current status, but was it not less than a year ago when then-leader Chameleon was due to go before the Commons committee on law enforcement?”
Kennedy immediately rose to reply.
“As the leader of the opposition knows circumstances were different then.”
Kennedy swallowed hard. What he was about to say brought back bad memories for him.
“Chameleon took over the leadership when Mister X was severely injured. They were in a state of crisis. And was it not the leader of the opposition who, in 1955, signed the papers that disbanded the original Anglo-Force? Again he shows signs of being two-faced!”
The debate, which was being shown live on television, was gaining huge viewing figures, the highest ever for a parliamentary debate. Some of those viewers were at the Anglo-Force mansion. Arthur Pendragon watched the proceedings intently. Katrina Velichev-Watt watched her husband as he sat forward in his chair, his chin leaning on his hands. Magus stood near the door, choosing not to enter the tense atmosphere in the room.
“At least Simon is standing up for us.” said Pendragon. “With him there we stand a chance.”
Watt did not reply. Katrina looked more worried than ever. She could tell her husband was worried. Never in his relatively short tenure as a “super-hero” had he gone through anything like this. She had been a mutant all of her life, but she had never gone through anything like this before. Then, without a word, Watt got to his feet and switched off the television.
“What did you do that for?” Pendragon asked.
“It’ll be on the news.” said Watt.
Watt then left the room. Katrina went to go after him but Magus stopped her, grabbing her arm.
“Leave him be girl.”
“But I can’t!”
Magus could tell from her voice that she was very worried.
“The best thing for him now is solitude.” said Magus.
Although she disagreed with him Katrina knew that the old wizard was right.

Magus left Watt to his solitude for two hours, and it was then that he ventured into Watt’s study. Only one lamp was on in the room. Magus tapped on the door slightly. Watt did not turn to acknowledge the noise, he just raised his hand, motioning the wizard into the room.
“You were right.” he said. “There was a report on the news.”
Watt swung round in his chair and now faced Magus.
“Could Space Ghost have been right?” he asked. “Will there come a time when men and women like us who have these ‘powers’ will become feared and hated, even though we only want to help mankind?”
“It may be possible that Space Ghost’s future, the future he came here from, no longer exists because we destroyed the Cyberdine plant.”
“Maybe destroying those bloody robots started everything off in the first place!”
“We can’t pre-judge future events.”
Their conversation stopped when there was another knock at the door. A few seconds later Prince T’Chuka entered.
“I hope I’m not disturbing you.” he said. “I’ve seen the report on the news. I know I’m only a new member but I think I may have an idea that can help.”
“Come in.” said Watt. “Sit down.”
T’Chuka sat in the chair opposite Watt’s desk.
“It seems to me that we may need a ‘refuge’ of sorts in the near future.” he started. “Somewhere were mutants, and all of the other super-heroes, can go where they won’t be feared, where they won’t be persecuted like animals.”
“You know of such a place?” asked Magus.
“In the Caribbean there is a small island called Ikotia.” said T’Chuka. “It’s not far from Barbados. I visited there recently. The Ikotian government seems to welcome mutants with open arms. They have no hang-ups about men and women like us.”
“I’m not so sure.” said Watt. “I’ve never heard of this island before.”
“I have, vaguely.” said Magus. “I’ve been meaning to visit there for a while now, but then the Acolyte thing came up and I got somewhat sidetracked. Perhaps now would be a good time to go.”
“One thing’s for certain.” said Watt. “We can’t all go.”
“Agreed.” said Magus. “If we all go it would draw suspicion upon the group. It would look like we were running from the problem. Maybe a small team, perhaps two or three.”
“Alright.” said Watt. “T’Chuka, as this is your brainchild you can lead the team.”
“Who else do you suggest?” asked Magus.
“Duncan has been itching for some action.” said Watt. “And as an alien Ultare would probably be more in need of a refuge than any of us mutants. When can you leave?”
“My private jet is at Heathrow as we speak. I told the pilot to stay in London for a few days. I had a hunch that you might approve of my idea.”
For the first time in a few days Watt smiled.
“I didn’t know telepathy was one of your powers!”
“It isn’t. I just know you too damned well!”
Watt got to his feet and walked towards the door.
“Alert Duncan and Ultare. And go prepared! I don’t want you three taking any chances, even if this island could help us soon, if we need the help!”

It was early the next morning when T’Chuka’s chauffer-driven limo pulled up outside Heathrow Airport. From out of the back door stepped T’Chuka, Duncan McCloud and Ultare Amarus. They soon made their way to a private runway where a Learjet stood waiting for them. Upon setting foot on board the aircraft McCloud’s jaw dropped.
“I’ve never seen any jet like this before!”
McCloud looked around as the best that money could buy filled the aircraft. Everything was catered for. Amarus, however, did not know what to make of it.
“There is nothing like this on Traxxor.” he said. “I guess having your own kingdom has some advantages!”
“Come!” said T’Chuka. “Make yourself at home! We have a long journey ahead of us!”
With the passengers safely strapped in they were soon in the air and on the way to the tropical island of Ikotia.