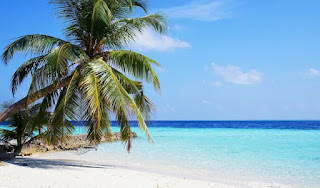 The journey across the Atlantic Ocean was a long one. It sometimes left Amarus wishing that his spacecraft had not been destroyed when he arrived on Earth. However, upon arrival in Ikotia their moods changed. They soon found the airport, and upon disembarking broad smiles appeared on their faces. McCloud was the first to disembark, and putting sunglasses on he looked around at what could only be described as paradise.
“How long have you known about this place Prince?” he asked.
“Please call me T’Chuka. We are team-mates after all. But in reply to your question, my father wanted to buy this island.”
“What stopped him?”
“We struck oil in Texas!”
A taxi took them to their hotel room. Their luggage being taken care of by a bell boy they approached the reception area. The male receptionist was very busy and he didn’t notice them at first. It was while they were waiting that McCloud noticed a small sign on the desk. It was made of white card, and the words had been written in black marker pen. It said:
“Please ask about our mutant discount.”
T’Chuka picked up the sign as if he was showing it to the others.
“See.” he said. “I told you we have nothing to worry about here!”
“Appearances can be very deceptive.” said McCloud.
They were soon in the suite that T’Chuka had booked some time before. There were three massive bedrooms in the suite. Each of the bedrooms made McCloud and Amarus feel rather small. McCloud lay in the centre of a huge four-poster bed when T’Chuka entered.
“How much is all of this costing?” he asked.
“To you it would cost the Earth, but to someone with my power not much!”
“You always brag about your money, don’t you?”
“Why not? It’s one of the best things in my life!”
The next day was spent doing things many men and women dream of - nothing. All they did was lounge around beside the hotel pool. Amarus started to take a swim but suddenly had to leave the pool when the temperature began to rise dramatically. The hotel staff put the mishap down to the hot weather. As they spent the time enjoying themselves McCloud did notice one odd thing.
“There’s this one thing that’s been bugging me ever since we got here. I have not seen any other mutants yet. Have you?”
“Mutants, and most of those with special abilities, look like normal men and women. Your average Terran wouldn’t be able to tell that I’m from another star system.”
“Perhaps you’re right.” said McCloud. “Still, I’d like to know where they all are!”
After spending the rest of the day enjoying themselves and eating a hearty meal in the evening their retired to their rooms in the early hours of the morning. McCloud, however, spent a restless night. He could have sword he heard some noise in the corridor outside. Getting out of bed he put on his bathrobe and left the suite. As soon as he was in the corridor five men were on top of him. They held him down and beat him. It wasn’t long before he was unconscious.

He didn’t know how long he had been unconscious, but the first thing McCloud noticed when he began to come to was the barred door. He was obviously in some sort of prison cell. Slowly he began to get to his feet. He ached all over. Then he felt a slight niggle in his neck. Feeling around his collar bone he could tell he was wearing some sort of metal collar, a mechanical collar of sorts. His jailers had obviously put it around his beck while he was unconscious. Then as he began to wonder where he was the door to the cell opened automatically. Then two mean in what appeared to be guards uniforms and carrying rifles entered the cell. They each took one of McCloud’s arms and dragged him from the cell. The immortal tried to complain but the guards were suffering from selective deafness.

A few minutes later McCloud was dragged into a very dusty yard. Several hours earlier McCloud had wondered aloud where all of the other mutants were on this island. When he arrived in the yard he got his answer. The scene he saw resembled one from a P.O.W. camp during World War II. Mutants with collars around their necks were lined up as if they were about to be put in front of a firing squad. Each of them looked nervous.
McCloud was shoved into the front row. Along the row he saw T’Chuka and Amarus. He had hoped that they had not been taken. When he tried to call out to them a rifle butt hit him in the stomach, winding him. The pain from the blow start to go when two men dressed in suits emerged from a nearby building. They soon made their way to a platform which overlooked the entire yard. The man with the greying hair stepped forwards towards a microphone. His voice soon rang out all over the yard.
“Many of you know that I am Joel Richards, President of Ikotia. Today we have some new arrivals. You, like the other mutants, will work on the Ikotian dam. When it is completed you will be released. And please do not make any attempt to escape. The collars around your necks which rob you of your power can also rob you of your life!”
Then, like lambs to the slaughter, the prisoners were led away. They then began their day’s work in the hope that they would soon be free.

The work was very hard, even for them. It was obvious to them why the government on Ikotia was very willing to let mutants and the like onto the island. They wanted to save labour costs, and save on the cost of having to buy the expensive machinery needed to construct a dam. By using mutants, and getting them to use their natural powers, they could trim a lot off the final cost.
McCloud found the work hard, but he could tell that the man next to him was finding the work harder. This man worse a yellow mask, a yellow costume, and had wings on his back. It was obvious to McCloud that he had been here for some time.
“How long have you been here?” McCloud asked.
At first the winged man did not reply. Then, after taking in a deep breath, he spoke.
“For too long. It’s about time I did something about it. With these collars partially deactivated I should be able to do something!”
And with that he laid down his tools and took off towards one of the guards. Knocking him over with the force of the collision he soon grabbed his rifle and pointed it at the guard. Then he took off into the air, trying to escape. The guards acted quickly, getting the computer to switch on all of the collars. The winged man let out a huge cry of pain and fell to the ground unconscious. Two guards then walked over to him and dragged him to his feet. The head guard then joined them.
“Put him in the cooler.” he said. “Then he won’t try to escape again!”
McCloud watched as the winged man was taken to a row of small metal huts not far away. In this climate it would have been like an oven inside. The winged man was thrown inside and the door was then padlocked. McCloud hoped that he would never have to undergo that form of torture.
Posted by Julian Radbourne at 01:00:00