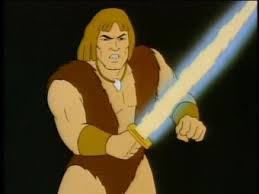 President Richards sat in his office later that evening, his security advisors around him.
“The one called Birdman tried to escape this afternoon. We had to put him in the cooler as punishment.”
“How are the new arrivals getting on?” Richards asked.
“They are not mutants like the others. One is from Voltania, the other claims to be from Scotland. As for the third we have no idea where he could be from. It seems like he’s not from this planet.”
“An alien? You mean the one with control over fire?”
Before his advisor could reply the lights suddenly went out, plunging the room into darkness. It wasn’t just in the office that the power had failed, it had gone all over the island. Quickly Richards picked up his cell-phone.
“This is Richards. What’s going on down there? Why is the power out?”
The voice of the security guard sounded into Richards’ ear.
“He just slipped by us sir. He knocked out three of my men before we could do anything. Then he knocked out one of the generators!”
“Who?”
“Thundarr sir. He just came out of nowhere!”
Richards banged the desk with his fist.
“Garner, take a full squad out to the power station. Get Thundarr! I want him dead!”
The tall security advisor left the office, on his way to the power plant.

As power had gone out all over the island the detention cells were now without power also. The collars were also deactivated. In his cell Amarus began to wake up as he saw his cell door open. He had no idea what was happening. But he knew not to look a gift horse in the mouth. Getting to his feet he left his cell. Then he went to T’Chuka’s cells. He was surprised to see the Voltanian sitting on the bed shuffling a pack of cards.
“Are you just going to sit there?” he asked. “We have a chance to escape!”
“Go away!” T’Chuka snapped. “Leave me alone!”
“Are you mad? We have a chance to get out of this place!”
Amarus then felt a hand on his shoulder. He turned around to see McCloud standing behind him. He almost jumped out of his skin.
“Come on.” he said. “Let’s get out of here!”
Amarus followed McCloud down the corridor.

The security team, lead by Garner, raced along the pathway towards the power station in search of the man who had disabled the power. But instead of finding him he found them. Suddenly a tall man dressed in what appeared to be animal fur and carrying a form of energy sword was upon them. Thundarr swung his sword at the guards, slicing their rifles in half. A kick to the stomach of another guard sent him flying. The rest of the security team down, Garner knew he stood no chance against the Barbarian. He decided to make his escape.

Meanwhile, inside the detention wing, McCloud and Amarus were making good progress down the darkened corridors. The only light that guided them was the emergency lighting.
“There must be an exit around here somewhere.” said McCloud.
Suddenly there was a whirring noise as the power began to come back on. Stuck out in the open they knew they would be thrown into the cooler if they were caught. Then they began to race back down the corridor towards their cells. As they ran they heard footsteps, the footsteps of the guards coming to see if everything was alright.
Amarus was having trouble keeping up with McCloud. He was getting out of breath. McCloud looked back and could see that Amarus was having trouble. He went back to help him along. Then they came to Amarus’ cell. McCloud pushed him inside and then went to his own cell. The footsteps were getting louder and louder as the guards got closer and closer. Then the door to Amarus’ cell closed. McCloud knew he didn’t have much time left. He raced along to his cell but could still hear the guards getting closer and closer. As he reached his cell he could see that the door was closing. Then the guards appeared in the corridor. McCloud made the mistake of looking at them. This cost him the valuable seconds he needed. He couldn’t get back into the cell, the door had closed shut. Then the guards arrived in the corridor.
“Freeze!”
Ten rifles were aimed at him. He knew that he could not go anywhere. Raising his hands he slowly approached the guards. Two grabbed each of his arms and hauled him away to the cooler. Amarus looked out of his cell and watched the guards take McCloud away. He knew that the Highlander had sacrificed himself for him.
Not long afterwards the guards made a check of the cells. They were surprised when they saw that no one else had tried to escape while the power was down. McCloud, it seemed, was the only one who tried. The guards thought that the mutants knew what was best for them.
After completing their checks they began to leave the detention wing. As they walked past T’Chuka’s cells the Voltanian got to his feet and reached out through the bars.
“Hey! I want to talk to you! I want to see Richards!”
One of the guards stopped and went over to T’Chuka’s cell.
“What could the President want with you? You’re just a slave!”
“I am T’Chuka, Crown Prince of Voltania, and a member of Anglo-Force! Tell the President I can lead him straight to Anglo-Force!”
The guard, sceptical about what T’Chuka had told him, informed Richards of what he had heard. The President was intrigued. He ordered for the Voltanian to be brought before him. Thirty minutes later T’Chuka stood before Richards’ desk.
“I never knew I had royalty working on the dam project!” he said. “You say you can lead me to Anglo-Force. My intelligence reports tell me that you have only recently joined them, and yet you are willing to betray them. Why?”
“I only joined them so I could destroy them from within. Now I realise that I need help from other sources. I can give you the access codes to their mansion’s security systems. With them you can apprehend the members and put them to work on your dam. With men like James Watt and Phineas Magus working with you your dam will be completed way ahead of time.”
Richards leaned back in his chair and began to stroke his chin.
“We are slightly behind schedule. We could do with men like Watt and Magus. We could then use the members of Anglo-Force on other projects.”
Richards then got to his feet. He motioned to two of the guards.
“Get a jeep and take him back to my mansion. Clean him up and give him a good meal. Then we will begin the debriefing.”
“What about this collar?” asked T’Chuka. “Aren’t you going to take this contraption off me?”
“Only when I have the information. Take him away!”
T’Chuka was led out of the office by the two burly-looking guards. Outside they took him to a waiting jeep.

It was the early hours of the morning, and once again work began on the dam. The prisoners were filed out of the detention wing and past the cooler. Amarus could not help looking at the place where McCloud and Birdman were being held. While they walked along he tapped the shoulder of the man in front of him. He turned around. He did not seem very happy.
“Hey, you! Want to get out of here?”
“Do you know a way we can?”
“I’ve noticed the way they guard the computer. I think I can get access to it, but I need someone to create a diversion. Can you and a few of the others arrange it?”
“I can try, but you won’t have long. There is bound to be someone on the back-up computer. You’ll have to be quick.”
“I’m quick, don’t worry about it.”
The work began as normal. Each of them went about their appointed tasks. About ten minutes later Amarus saw his chance as he had to walk past the guard who operated the computer. His collar had been deactivated so he could carry out his work. Then he put his plan into operation. Nodding to one of the others they started a fight. This managed to get the attention of several of the guards as they moved forwards to stop this fracas. One of them shouted for the collars to be activated, but before the operator could carry out that order Amarus fired a heat blast at the guard, knocking him away from the computer. Taking the small laptop in his hand he tried to find the access code for the collars. He could not. Then he fired another blast at the computer in a hope that destroying it could render the collars useless. This worked.
“The collars are deactivated!” he called to the others. “We’re free!”
Not for long however, The backup system soon came into play as it was quickly operated. Just as the mutants were about to use their powers their collars were activated again, robbing them of their powers and causing them agony. Amarus, who had taken to the air, suddenly found himself falling to the ground with a resounding thud. He then found himself surrounded by guards.
“This one seems to be the ringleader. We can’t throw all of them in the cooler so we’ll make an example of him!”
The guards pulled Amarus to his feet and dragged him away to the cooler. He was thrown into the cell next to McCloud. The immortal looked up as he heard what was happening.
“Ultare, is that you?”
McCloud could barely speak because of the searing heat.
“We tried to escape. They threw me in here because I planned it all!”
“Where….is….T’Chuka?”
“You humans would say that he had sold out. He was taken away to see Richards. He’s going to give him the access codes to the mansion. He wants to kidnap Anglo-Force and use them in this project!”
“T’Chuka hasn’t betrayed us! He’s too honourable for that! He won’t let us down!”
Amarus had his doubts.