The Journeys of Magus - Chapter Two 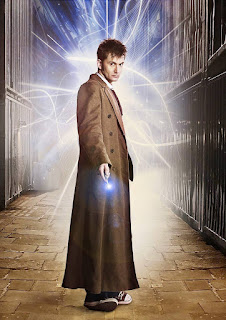 The Chancellor waited in a corridor as the Valkyrie’s transporter was energised. Soon Watt, Sutek and Magus arrived on the planet’s surface. The Chancellor greeted them warmly.
“Captain Watt, it is a pleasure to meet you. Your grandfather has told me much about you during our talks.”
“It is a pleasure to visit your fine planet.” Watt replied. “May I present to you my first officer Commander Sutek and Ambassador Phineas Magus.”
“The legendary Ambassador Magus. I admire your work during the Monstron wars. Please, come this way.”
They were soon shown into the council chamber where the President, the Doctor and Drathro greeted them. Magus and the Doctor soon renewed their acquaintance.
“I would say it is good to see you again.” said Magus. “But I haven’t seen you since you regenerated. Which regeneration is this?”
“Tenth.” the Doctor replied.
“Please, be seated.” said the President.
They were soon seated at the table, and the President ordered refreshments.
“Did President Watt tell you why we asked you to come here?”
“He was very vague Lord President.” said Magus. “He said it was something to do with the new relationship between the Federation and Gallifrey.”
“Young Drathro here has expressed a desire to explore the universe.” said the President. “We had hoped that the Doctor would act as his tutor and teach him the ways of the universe, but sadly the Doctor has declined. He has, however, suggested you Ambassador Magus.”
“Me? But why?”
“You are not a Time Lord. Which means that you are not bound by our rules. It is our hope that one day Drathro will act as the Gallifreyan Ambassador to the Federation, but at the moment he is not experienced enough. We believed you are the perfect guide for him.”
Magus turned to Drathro.
“Tell me, young man. Why do you wish to learn the ways of the universe?”
“I don’t really know. I just wish to learn. One day I will serve my people. If the Doctor cannot tutor me then I can think of no one better than you Ambassador.”
Magus leaned back in his chair and smiled.
“Flattery will get you everywhere, my dear boy. Tell me Lord President, how would we travel through the stars? In a Tardis perhaps?”
“I’m afraid that would be out of the question Ambassador. We cannot give you the secret of our time travel devices…yet. Perhaps when our alliance with the Federation is established we will share some of our technology with you.”
“Then what about a starship?” suggested Watt.
“A starship would be perfect!” said Magus. “Although we obviously would not be able to travel through time we would still be able to travel through the universe. And it would give me the chance to try out a few new ideas I have. I would welcome the input of a young Gallifreyan.”
“Then you will accept the offer?” asked the President.
“Wholeheartedly. Tell me Drathro, when can you leave?”
“As soon as you wish Ambassador.”
“That’s another thing. I may have to resign from Starfleet. Perhaps you should start calling me…Doctor!”
Drathro smiled.
“I had originally wanted to travel with the Doctor. Now it seems I will be travelling with a Doctor at least! Please tell me Doctor, what exactly are you a Doctor of?”
Magus smiled and stroked his beard.
“My dear boy, I’m a doctor of practically everything!”

“Did I hear you correctly?” asked President Watt. “You want me to give you a starship?”
“Not a new starship obviously.” Magus replied. “The President wants to me to tutor Drathro in the ways of the universe so that he will one day become Gallifrey’s Ambassador to the Federation.”
“And you need a starship to travel through the universe. I’m afraid the only starships I can offer you are from the surplus depot near Qualor II.”
“That’s quite alright. I don’t need anything that big. Perhaps an old science vessel.”
“Like an Oberth-class starship. What about crew?”
“That is something else I need your help with. Apart from Teddy and the others I will need an engineer, and perhaps a first officer, as well as a few others. Tell me, is James Winthorn doing anything at the moment?”
“He’s still on shore leave in Norfolk as far as I know.”
“He may be the perfect choice. As for engineers I know someone perfect for this job.”
“Tell me one thing though. The old ships at Qualor II are derelict. How will you get one working again?”
“Dilithium can be very restrictive at times. I’ve been working on a new means of propulsion using cavourite crystals.”
“And you think this will work?”
“I have faith in my engineer! It will work!”

A short time later Watt walked into Magus’ quarters, just as Magus was packing a large trunk.
“So you’re doing this then?” he asked. “You’re leaving the Valkyrie.”
“I’m afraid so. Oh, by the way, thank you for the loan of the shuttle craft. I know it would have been out of your way to go to the Norpin colony.”
Magus then closed the trunk.
“What about Teddy and the others?” asked Watt.
“The Doctor is taking them back to the Time of Legends. Drathro and I will pick them up later.”
Magus then went over to pick the trunk up.
“Don’t worry about that.” said Watt. “I’ll have it taken to the shuttle bay.”
“It’s no problem.”
Magus waved his hand over the trunk and it slowly vanished, only to appear again in the shuttle. Magus then walked over to Watt, and the two old friends hugged.
“This old girl won’t be the same without you.”
“You’ll get by. You always have.”
Magus then waked towards the door when Watt’s communicator sounded.
“Transporter Room Three to Captain Watt. Drathro has just beamed aboard.”
“Please show him to Shuttle Bay Two.”
Magus and Watt looked at each other again.
“You’d better get going.” said Watt. “You’ve got a young Time Lord waiting for you.”
After saying their goodbyes Magus soon made his way to the shuttle bay where Drathro was waiting for him.
“Hello Doctor.”
“Greetings Drathro. Tell me, have you ever flown a shuttle before?”
“I’ve studied the schematics some times.”
“Good. Then take the pilot’s seat and set a course for the Norpin colony.”
“Why there?”
“We are going to visit an old friend. One who can help us on our travels.”
The shuttle soon left the Valkyrie. Watt stood in Magus’ old quarters, and as soon as he left the ship the surroundings reverted back to their normal appearance. When this happened Watt couldn’t help feeling a little sad.