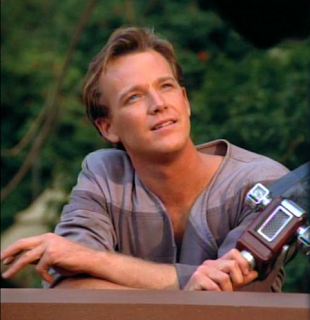 The prison shuttle craft neared the main landing pad of the New Zealand penal colony. Aboard were what some considered very important passengers, and what others considered common criminals. Captain Watt and Commander Sutek sat patiently as the shuttle landed. Restraints having been placed around their wrists they were soon led away to a holding cell. An hour passed as they were processed by the colony’s computer system. Then they were taken to the main living area and fitted with tracking devices around their ankles.

They had been given beds next to each other, and they now sat looking around, taking in their surroundings. In one corner sat a fearsome-looking Nausican, obviously there after having committed some violent crime, probably a bar room brawl, as is the Nausican way. Nearby was a Tarn, passing the time by using his telekinetic power to move a coffee cup. As Watt observed his fellow inmates he failed to notice a young human man approach them.

“Well well well! I never thought I’d see the day when one of Starfleet’s finest would be here in New Zealand!”

Watt looked up at the young man. He seemed strangely familiar to him.

“The name is Paris, Tom Paris.”

“Tom Paris as in the Calder II incident?” Sutek asked.

“The one and only! Word has it that you two haven’t even had a trial yet!”

“That’s true!” said Watt. “And the way things have been going we probably won’t be!”

“Let me just tell you this.” Said Paris, leaning forward and looking Watt straight in the eye. “This place can be tough, and when some of the others hear that we’ve got Captain Watt and Commander Sutek in here they may want to try and make a name for themselves!”

“Are you one of those looking for a name?” Watt asked.

Standing back Paris winked at Watt and Sutek and then walked away.

“But I have a feeling he wasn’t threatening us!”

At the main docking port on Onari Calvin Hudson could barely keep up as he followed Chakotay toward the ship.

“Will you stop for one minute?” Hudson shouted.

The Native American turned and stared at Hudson. He had a scouting mission to go on, and he wasn’t happy at these delays.

“Is this about us helping the renegades on the Time of Legends?” Chakotay snapped. “I’ve said before I don’t think it’s a good idea! The Maquis have enough problems dealing with the Cardassians at the moment! We haven’t got enough time to help them fight their fight as well!”

“But it’s something we should consider!” said Hudson. “After all, if Servalan is as corrupt as those rumours say this could affect us as well!”

“Then when that time comes we’ll deal with it!”

Chakotay then turned around when he heard a voice calling out to him. He soon saw his chief engineer, the Klingon/human B’Elanna Torres.

“We can’t afford to hang around here much longer!” she called.

Torres was soon joined by the Vulcan, Tuvok.

“I must agree. Our reports said that a Cardassian warship was due past Onara very soon.”

Chakotay made his way towards the ship.

“This discussion isn’t over!” Hudson shouted.

Chakotay then boarded the ship, and shortly afterwards they took off, leaving Hudson behind, an annoyed man.

On the bridge Tuvok turned to Chakotay.

“Was your conversation with Commander Hudson about the rebels again?”

“He does have a point. The Federation seems to be heading in a new direction under Servalan’s leadership, and those who could oppose her are being put out of the way, so to speak.”

Chakotay look out of the cockpit window. Torres was right. The problem was in the form of a Cardassian warship.

“We are being hailed.” Tuvok reported.

The image of Cardassian Gul Evek appeared on the screen.

“This is Gul Evek of the Cardassian Fifth Order to the Maquis ship. I order you to disarm your weapons and surrender!”

Chakotay sneered at the image in Evek.

“Not in a million years!”

General Hague and Commander Sisko sat aboard a shuttle craft on it’s way to the Utopia Planitia ship yards in orbit around Mars. Sisko was still a little confused as to why he was on his way there.

“You say you want me to negotiate with the Dominion.” said Sisko. “Then why are you giving me a new ship? Why not send an existing starship into the Gamma Quadrant?”

“You saw what happened to the Pinafore.” Hague replied. “An ‘ordinary’ starship may not be good enough against the Jem’Hadar in a straight fight. That is why I’m giving you a certain ship you are somewhat familiar with.”

Something in Sisko’s mind snapped. He thought he knew what Hague was talking about.

“Coming up on the ship yards now General.”

The two made their way to the cockpit area. Sisko smiled at the ship he saw. In some manners it looked like a normal Federation starship, but on others it was different. For instance it had no saucer section to speak of, and it was much smaller, smaller than an Oberth-class starship.

“You should remember the Defiant Ben.” Said Hague. “After all you helped design her.”

“But what about all of the problems we had? She was over-powered and over-gunned! She may not be any good in a fight!”

“We’ve tried to iron out a few of those problems. Some of them though your staff will have to deal with.”

Soon the shuttle was docked with the Defiant, and Sisko and Hague walked onto the bridge to find it a hive of activity. There they saw Ambassador Spock.

“The Ambassador has been helping out some of our details, including the Defiant’s official listing.”

“If certain powers, such as the Cardassians or the Monstrons, ever found out that the Federation had developed what is essentially a warship they would be outraged, and it could start a conflict with them.” said Spock. “With the threat from the Dominion that is the last thing we need.”

“There is one problem as far as I can see.” said Sisko. “The Defiant would be like a sitting duck in the Gamma Quadrant!”

“If you mean that she will be easily detected then I am trying to remedy that situation.” said Spock. “I am currently in contact with the Romulan government. I am sure they will lend us a cloaking device, perhaps in exchange for any information on the Dominion we collect. After all, the threat concerns them as well.”

“There are still some preparations to make.” Hague replied. “But you will probably leave within the next ten days.”

“Indeed.” said Spock. “This threat must be assessed. We must avoid wat at costs.”

With Starfleet One in orbit around Titan Servalan stood under the statue of Zefram Cochrane on Christopher’s Landing and watched as invited guests began to seat themselves. They included many dignitaries from Titan. Once all had arrived she began her speech.

“Ladies and gentlemen, I would first like to pay tribute to my predecessor. James Watt was a great man who served his country, his world, and then the Federation for nearly four centuries before he was taken away from us by the man he considered a friend. Ever since his death the Federation has been in a virtual state of mourning, and although we feel saddened by his loss the time has come to move on. It is what James Watt would have wanted.

“That is why I stand here before you today, on this historic site. For years the Federation has been caught in a rut, and while we haven’t gone backwards we haven’t progressed forwards either. That I am about to change. There are many things that threaten the stability of the Federation, both from without and within. I aim to put a stop to these threats. My methods may not please all but they will get results, and the United Federation of Planet will regain those glories tat we thought were lost!”

The speech continued, and Servalan laid out her plans for the Federation, her way forward. She spoke for nearly an hour, and her words clearly pleased the gathered guests. Afterwards she received a standing ovation, and smiling, she left her platform where she was greeted by Commodore Queeg.

“All seemed to go well.” he said. “They seemed to believe you.”

“They are all fools.” said Servalan. “And if they believe that they’ll believe anything!”