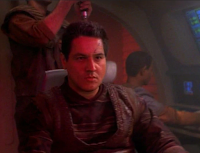 The Maquis ship was clearly being outclassed by the huge Cardassian warship. Phaser blast after phaser blast was being fired at Chakotay and his crew. Some it and caused damage. Some missed. However, on the bridge, Chakotay tried to remain calm.

“We have sustained damage to our port warp nacelle.” Tuvok reported. “We no longer have warp capability.”

“Can you do anything B’Elanna?” Chakotay asked.

“These engines are useless!”

“Try to be creative!” urged Chakotay.

“It’s hard to be creative with thirty-nine year old engines!”

The image of Gul Evek once again appeared on the view screen.

“This is Gul Evek! I order you to surrender at once!”

Tuvok turned off the screen.

“I need enough power to get into the Badlands!” said Chakotay.

Torres studied her panel and her mind raced with possibilities. Some were quickly discarded until she came up with an idea that seemed good.

The Vulcan stared at Torres.

“Under the circumstances that would not seem a rational plan of action.”

“I can transfer the power from the weapons to the impulse engines. It will give us the power we need to get to the Badlands!”

“Do as she says Tuvok.” Chakotay ordered.

The weapons taken offline, Torres began her work, transferring the power to the impulse engines. Straight away Chakotay steered the ship into the plasma storm infested area dubbed the Badlands. Thinking they were safe Tuvok’s sensor panel told them otherwise.

“The Cardassian vessel is following us in.”

The plasma storms were fierce. Chakotay just about managed to steep the ship around them. It’s smaller size made it more manoeuvrable than the Cardassian warship. Gul Evek ordered his pilot to follow the Maquis ship move for move, but he did not think of the plasma storms. A burst from one of these storms hit the Cardassian’s starboard warp nacelle, sending them spiralling away from the Maquis ship.

“Cardassian ship has broken off pursuit.” Tuvok reported. “It would seem we are safe.”

“Good.” said Chakotay, getting to his feet. “We can use the time to make some repairs.”

Then the alarm rang out throughout the ship.

“A cohesive tetrion beam of massive proportions is heading directly towards us.” Tuvok replied. “It will hit us in approximately thirty seconds.”

“I can’t!” Torres shouted. “We used all of our engine power getting us here! We can’t escape!”

Before they could do anything the beam hit them. It did no damage to them, but it did something that possibly nothing else could do. It made them vanish without a trace.
This was one job that Bruce Maddix did not enjoy. However, his task in assembling the renegade android Lore was almost complete. The final piece put into place Maddix looked around nervously. Nearly sat the deactivated form of R4. In the past few years the droid from the Galactic Empire had become more than just a study object. Maddix had grown fond of “him”. He now thought of R4 as a sentient life form. Now he had to reactivate what could only be described as an evil creation. Noonian Soong had no idea that Lore would go so wrong. Maddix knew that this would happen, and he could do nothing about it because orders were orders, and these orders came from the President herself.

Moving to the side of the table Maddix lifted Lore’s arm and pressed the switch that activated him. Lore suddenly sat up, “life” surging through every component of his body. More looked around, tyring to take in his surroundings.

“Where am I? The last thing I remember I was being taken apart by Picard and his cronies.”

“I am Commander Bruce Maddix of Starfleet Cybernetics.”

“And you reconstructed me?”

“Not by choice. I was ordered to.”

A smile appeared on Lore’s face.

“Starfleet ordered you to put me back together again! How interesting!”

Getting to his feet Lore began to “exercise” himself, walking around the lab. He stopped when he saw the lifeless form of R4.

“Is this one of your creations? It is very crude!”

“No. I’ve been working with him for a few years now.”

Lore seated himself at Maddix’s computer terminal. He swung around on the swivel chair until he faced Maddix.

“So tell me Commander, who gave you your orders? Picard? An admiral perhaps, wishing to study me? Perhaps they want to find out what makes me tick!”

“No. The orders came from President Servalan.”

Lore leaned forward. He was intrigued by what he had just heard.

“The Federation President ordered you to reconstruct me? Why would she want that?”

“I don’t know. Perhaps only she can answer that.”

“Well I’m not staying here to be the President’s pawn!”

Lore stood up and started to walk towards the exit.

“I wouldn’t do that if I were you.” said Maddix. “I was ordered to install a remote deactivation device into your circuits by the President, in case you tried something like this.”

“You expect me to believe you Commander?”

Maddix reached into his pocket and pulled out a small device. Aiming it in Lore’s direction he activated it and Lore slumped to the ground. Maddix began to think to himself about Lore’s question. What would Servalan want with an android like Lore?”

Several Starfleet Security guards carrying phaser rifles bustled them along. One by one the former senior officers of the Valkyrie, Tompkins, Trospheo, Amarus, Singh and O’Rourke were bustled aboard the prison ship U.S.S. London. Once aboard they could hear the impulse engines fire up before they left Earth’s orbit. Soon they were headed towards Cygnus Alpha. In the prisoner’s compartment Singh was the first to speak.

“This is not right. We have received no trial, and we have been given no reason for being sent to Cygnus Alpha.”

“Face it Doc, there’s nothing we can do!” said O’Rourke.

“I have a feeling we’ll be getting help soon.” said Tompkins. “Ambassador Magus will know about this by now. He’ll do something!”

In the Ops room of the Pegasus station Pendragon stood by the main viewer looking down at his uniform. Something was not quite right with it. It was the same style of uniform he’d worn since he’d taken command of the station, the black tunic with red shoulders, the blue shirt underneath, the black trousers, the gold Starfleet emblem communicator. As he stood looking down at his uniform Magus joined him.

“This uniform doesn’t feel right.” Pendragon replied. “We’ve declared ourselves separate from the United Federation of Planets, and yet most of us still wear Starfleet uniforms.”

Magus placed his hand on his chin and began to think.

“You are correct Captain. It hardly seems right that you should still wear that uniform when you no longer serve in Starfleet.”

Magus extended his hand towards Pendragon and moved it down from his hand. Slowly, as Magus moved his hand, his uniform began to change. The black tunic was replaced by a black jacket with four red stripes on the right arm. The blue under-shirt was replaced by a red polo neck-type shirt. However, the Starfleet-style communicator remained.

“How about that for the uniform of our Free Federation?”

Pendragon looked down at his new uniform.

“Of course we should keep the colours, such as red for command and all that.”

“I think we should issue uniforms like this to all personnel. Perhaps you could persuade Blake and his crew to wear such uniforms as well.”

Magus was about to leave Ops when his attention was drawn to something. From his station Plato called over to Pendragon.

“Captain, I’m picking up a small vessel on the long-range sensors, heading directly towards us.”

“Is it a Federation ship?”

Plato looked down at his panel.

“No. It is a privately-owned ship, but I cannot find it in any registry.

Plato did as ordered.

The image of a grey-haired man appeared on the screen. Magus recognised him instantly.

“Who is he?” Pendragon asked.

“My dear boy, I am former Federation President Zarkoff, and I request permission to dock with your station!”

“Please forgive me sir.” said Pendragon. “But I must know your intentions.”

“I have been monitoring your transmissions to the Lohengrin. If you are to form your own Federation then you will need diplomatic experience. I am here to offer such experience.”

“I believe we can.” Magus replied. “If we are to go it alone then we will need the help of men like him.”

Pendragon paused before he gave the order for the sound to be restored.

“Thank you Captain. By the way, your new uniform suits you. You should issue it to the rest of your men.”

“This is your call Doctor. If anything goes wrong it will be your responsibility.”

“This is a chance I’m willing to take.”