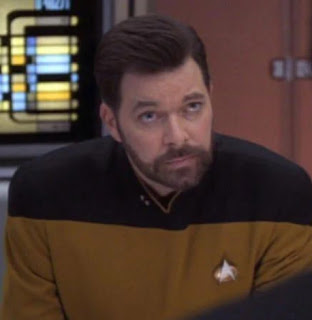 The gateway between the Alpha and Gamma Quadrants opened, and the U.S.S. Pinafore, along with the DS9 runabouts, had arrived at the other side of the galaxy.

“Stay alert everyone.” Spalding ordered. “We could be attacked at any moment.”

Spalding was right. Before they knew it two Jem’Hadar ships were upon them, attacking them with everything they had. The Pinafore was the first to take a hit, but they were able to carry on. Then the Ganges, piloted by Dax, O’Brien and Odo took a hit. O’Brien was able to get off a phaser blast at the Jem’Hadar ship, damaging it’s engines. Another blast soon saw it blown into a thousand pieces.

“Chief, are you alright?” Spalding shouted into his communicator.

“My port nacelle sustained a hit. I don’t know if we’ll be any more good in this fight!”

There was another blast as Kira took care of the other Jem’Hadar ship.

“Very well.” said Spalding. “We’ve located Commander Sisko’s runabout. You rendezvous with that. We’ll try and hold them off as long as we can!”

The Ganges then broke off from the formation and headed in the direction of Sisko’s runabout.

On board Nog was getting impatient.

“How about flying this thing at warp now?”

“Are you kidding?” said Jake. “I’m having enough trouble flying this thing at standard orbit speed!”

Then a broad smile appeared on his face as his communicator sounded.

The celebrations began. They had finally been rescued.

Handing the controls to Dax and Odo O’Brien beamed over where he was greeted by a grateful Jake. O’Brien then set about trying to repair the damage that had been done. Shortly afterwards he contacted the Pinafore.

“All the weapons are down Captain. This thing won’t be much good in a fight. I’m going on ahead to look for Commander Sisko and Quark.”

“Understood Chief. We’ll hold them off as long as possible.”

And as O’Brien steered the runabout in the direction of the planet three more Jem’Hadar warships appeared in the distance.

Watt sat in his cell in Dentonville Prison. Four blank walls stared down at him. One wall was the door, it’s observation panel closed tightly. Then the panel opened and a guard look in. Although a prisoner Watt had not yet undergone a formal trial and was still accorded the privileges of his rank.

“There is a visitor for you sir.” announced the guard.

Watt was taken to a meeting room and left seemingly alone, although he knew full well that he was constantly monitored.

After a few seconds Diane Watt entered. She looked distressed and sat down opposite her ex-husband.

“Jim, I had to come. I can’t believe what they are saying about you.”

Diane could not help but smile.

“The latest is that he transplanted a human brain into Teddy.”

Watt smiled in his turn.

“I haven’t met a human with a brain like that dog yet!”

His ex-wife looked across at him, her lower lip trembling.

“I’ve had a visit from Starfleet Security. They ransacked the house.”

“Do you know what they were looking for?” he asked.

“I wish I knew.” she whispered.

The battle in the Gamma Quadrant was not going well for the Pinafore and the runabouts. As soon as they managed to get the upper hand against the Jem’Hadar ships more seemingly appeared out of nowhere. It was the Pinafore that sustained the most damage. On the bridge Captain Spalding tried to keep control.

“There’s a ninety per-cent power loss on the starboard nacelle!” the first officer reported above the noise of the klaxons. “The power couplings are shot to ribbons!”

“Re-route emergency power to the warp core.” Spalding ordered. “Try to give Chief O’Brien as much time as possible!”

As Spalding gave the order another blast rocked the ship.

Captain Sinclair sat in his Ready Room, a heavy emotional weight lying on his shoulders. Never before in his long career had he ever faced a situation like this before. It was the most difficult decision he ever had to make.

As he sat in deep thought his door buzzer sounded. At first he paid no attention to it, until it sounded for a second time.

The door opened and a solemn-looking Tom Riker entered. Riker seated himself in the chair opposite Sinclair.

“Captain, it’s about this evidence against the President.” Riker started. “Before you make your broadcast to the crew there’s something I think you should know.”

Riker sat back in the chair and took a deep breath before he continued.

“Just before I transferred from the Gandhi I was on shore leave from Rycea. It was there I met Chakotay.”

“I had a feeling from seeing you together that you knew each other.”

“It was then we began to talk. I wasn’t happy with the direction the Federation was heading. We talked about many things, mainly the way the Cardassians were treating our colonies on their side of the zone. It was after that I decided to work undercover for the Maquis.”

A look of shock appeared on Sinclair’s face.

“And you’ve been spying for them ever since you came aboard?”

“Yes sir. I was to report to Chakotay once a week, but what with this Blake situation I didn’t have the chance. And what with this new evidence I thought it best to come and tell you, and to make a request. I would like to leave the Lohengrin and head towards the zone.”

Sinclair thought for a few moments before answering the request.

“If we are going to fight against Servalan we’re going to need a good fighter. It would be a shame to lose you.”

“If the Federation is going the way we think it is then the Maquis may need me. Things could get pretty hairy with the Cardassians from now.”

“I can give you a shuttle craft, but nothing more. It would take you over a week to get to the zone, and then you might be stopped by the Cardassians.”

Sinclair stood up and extended his hand. Riker grasped it.

Sinclair then activated his communicator.

“Sinclair to Shelby. Assign a shuttle craft to Commander Riker. He’s going on a journey. List him in the logs as being granted shore leave, not that the Federation will care much after what we’re going to do.”

Riker gathered his possessions from his quarters and left shortly afterwards. It was then that Sinclair entered the bridge.

“Mister Tarses, open a channel to everyone on this ship.”

The channel was soon opened.

“Ladies and gentlemen, this is Captain Jeffrey Sinclair speaking. By now you should have read the evidence regarding President Servalan, and you will know, like me, that if we were to rush back to Earth and give her this evidence our lives wouldn’t be worth living. This is why we now have to make a difficult decision, perhaps the most difficult decision we will ever have to make. We have two options. Do we return to Earth, or do we go to the safe zone, the Time of Legends, and try to formulate a plan, a way we can present this evidence to the Federation in a way that would not endanger ourselves and our families? The senior officers and I have made our choice, now it is time for you to make yours. We are setting course for the Time of Legends. Anyone who does not wish to come with us may leave now in a shuttle. You have one hour to inform me of your decision.”

The hour passed. Calls came from everyone on board. The only one to leave was Riker. Sinclair, now seated in his chair, gave perhaps his most important order.

“Set a course for the Time of Legends, ahead warp factor five.”