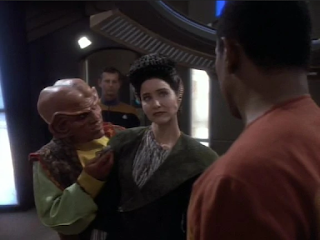 Sisko, Quark and Eris had made it to the surface. Several Jem’Hadar warriors were in hot pursuit but were soon beaten back by blaster fire. Then Sisko came to a sudden halt.

“This was the old beam out site.” he said.

Seconds later the three of them were enveloped by the transporter beam and were soon back aboard the runabout. Once aboard Sisko was greeted by Jake. Glad to see each other, they hugged.

“Glad to have you back Commander.” said O’Brien.

As Jake and Nog led Eris to the back of the runabout Sisko took up the seat next to O’Brien.

“The Pinafore came through with us. The Jem’Hadar ships seem to have the better of us at the moment!”

“Then let’s do something about it!”

New Starfleet commander-in-chief General William Hague sat in his new office, still with some of the possessions of Admiral Duncan McCloud around him. As he sat looking around a young lieutenant came in.

“General, we’re picking up a coded transmission for you.”

“Who would be sending a coded transmission to Earth? Alright Lieutenant, put it through.”

The young officer left the office, and Hague’s view-screen soon came to life.

Hague’s eye was scanned by the computer.

The image of Captain Jeffrey Sinclair soon appeared on the screen before him.

“This is Captain Jeffrey Sinclair, commanding officer, U.S.S. Lohengrin. I am making this transmission to inform you of the decision that has been taken by myself and the rest of the crew. Because of recent events we have decided to set a course for the Time of Legends, where we will dock with the Pegasus station. We may contact you from there. Sinclair out.”

The screen went blank. It was obvious to Hague that the transmission was only a recording. Hague knew if Servalan saw this recording she would blow her top.

The computer sprang to life.

Hague then leaned back in his chair, put his feet on the desk, and smiled.

The battle between the Federation and the Jem’Hadar continued. With the added experience of Commander Sisko the battle went in favour of the Federation. One after the other the Jem’Hadar warships were destroyed by the badly-damaged Pinafore and the lesser damaged runabouts.

However, one lone Jem’Hadar ship remained, and it headed towards the Pinafore, which was virtually dead in space. On the bridge panic began to set in.

“Engineering reports a breach in the warp core!” shouted the first officer. “Fifty-eight seconds until it goes!”

“Try to lock it down!” shouted Spalding. “We need all the power we can get!”

Then the final Jem’Hadar ship moved towards the Pinafore, gaining speed and momentum as it got closer and closer. Too far away to do anything, the runabout crews looked on in horror as the Jem’Hadar ship crashed into the defenceless Pinafore on a kamikaze run. With the damage of the warp core breach the Pinafore stood no chance. Five hundred lives were lost, as well as the lives of the Jem’Hadar warriors.

Sisko sat in shock for a few moments as the shock set in. He then regained his composure.

“Set a course for the wormhole.”

There was complete silence as the runabouts arrived back in the Alpha Quadrant, and shortly afterwards they docked with the station. As Sisko prepared to set foot once again on the station Quark called him over to one side.

“Commander! Take a look at this!”

While the others took Eris to Ops Sisko stayed behind with Quark.

In Ops Eris spelled out a warning.

“You’re not going to be sage now.” she warned. “The Dominion will come through the anomaly and take control of your quadrant, in the same way they took control of mine.”

“And they will get a little help from you!”

They looked towards the turbo lift to see Sisko and Quark entering. In his hand Quark held the restraining device he had taken from Eris.

“What are you talking about?” asked Eris, seemingly shocked. “Why would I want to help the Dominion? They captured me!”

“I was examining this device!” Quark started. “I wanted to see if I could turn a tidy profit after replicating it. You see, telepathic limiters are rare in this neck of the woods. But on a closer examination I discovered that it was nothing more than a sophisticated locking device!”

“You could.” said Sisko. “You were placed on that planet to trap us. You are part of the Dominion. You are one of the Founders!”

A look of sheer hatred appeared on Eris’ face.

“You are correct Commander. I was sent here to keep an eye on you. You may have discovered my secret, but you cannot resist the Founders, or the Dominion!”

And with that Eris pressed a small device on her shoulder. Suddenly a transporter beam locked onto her and she was whisked away. Dax raced over to her station.

“I can’t find any trace of a transporter beam!” she announced. “If there was a ship nearby it’s long gone!”

“There is one thing we can be sure of.” said Sisko. “She, and others like her from the Dominion, will be back. And when they do we’ll be waiting for them!”