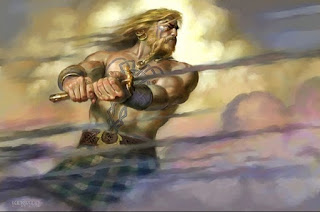 Outer space could be a lonely place, especially if you were flying through it without the aid of a spacecraft. But sometimes people desire loneliness. One of these people was Cosmic Kid. The youngster had agreed to help the Istari in their war with Darkmagus, and he was now on his way back to the moon of Titan, where he had spent much of his time during the last year. Titan, of course, was famous as the home of the former Avenger Starfox, and the late Mar-Vell.
As Cosmic Kid left the Earth’s atmosphere his thoughts were on the meeting at the Anglo-Force mansion. He wondered how big a part he would play in this way. In the back of his mind something told him he hoped it would be a small role.
Soon Cosmic Kid was approaching Mars, the red planet. His thoughts were still on the impending conflict, his flight path and speed being controlled by his sub-conscious. It was because of this he failed to notice a structure on the surface of Mars. He also failed to notice when an energy beam came his way. The energy beam soon struck him.

He did not know what had hit him. Stunned, he began to fall to the surface of the planet. There was a cloud of dust as he crashed into the surface. A few seconds later and he slowly dragged himself to his feet, dusting himself off and looking round for the place the energy beam emanated from. In the distance he then caught sight of the massive structure. Strange, he thought, because he hadn’t seen it before, and he had flown past Mars many times. He then began to walk towards the building, but when he was fifty feet away he was suddenly flung back ten feet. Again he found himself dusting himself off. Obviously some sort of force-field protecting the building he though. But why would the inhabitants of this building attack him when he was only passing Mars on his way back to Titan. Getting to his feet he soon raised his hand and fired a cosmic bolt at the shield. The bolt struck the shield and seemed to cause some damage, but not enough to disable the force-field. He again raised his arm, and soon another bolt of cosmic energy struck the shield. This bolt had the desired effect. But as soon as the force-field was destroyed he found the skies above Mars filled with small spacecraft. Each one of them seemed to be carrying weapons, and each one of the weapons was aimed at the youngster.
“Surrender!” a voice boomed. “You have breached the fortress of Darkmagus! You must surrender!”
Raising his arm Cosmic Kid fired a bolt of cosmic energy at the spacecraft, causing great damage. Before he could launch another attack however he found himself covered by an energy shield. The shield seemed to drain his power somehow. He knew there was no way he could escape.

Guy’s Hospital in London was hardly a place you would expect to find a red and yellow clad superhero in, but there was one in this hospital. It had been some time since John Clark, the man known as Jet, had battled the men from the future, the troops of the Galactic Empire, a battle in which he had sustained serious injury. But ever since that battle he had been under the car of Doctor Leonard Sadler, a resident at Guy’s. Indeed, Guy’s was the first place in years he had spent any amount of time. Jet continued to live the life of a loner, but now he realised he needed help.
Sadler sat in his office, his window wide open, when there was a sudden woosh. Papers went flying. Sadler scrambled around, trying to keep others from flying off his desk. When he looked up he saw the smiling face of Jet looking at him.
“Sorry about that Doctor.” he said. “I’m also sorry I’m late for my check up. I had a little meeting to attend.”
“Yes, I heard about this little gathering at the Anglo-Force mansion on the radio.” said Sadler.
Sadler began to reach into his desk.
“You see, Mister Clark, I have a problem with this meeting you’ve just had.”
“What are you talking about Doctor?”
Sadler suddenly pulled out a gun and pointed it at Jet.
“You have no choice. Either pull out of helping the Istari and their Acolytes or I will kill you!”
Jet was dumb-founded. Over the past two months he had looked upon Dr. Sadler as a friend, one of the few he had, but now it seemed that Sadler was in fact working for Darkmagus.
“You look surprised Mr. Clark.” said Sadler. “But there should really be no need to be so. You see, I have been watching you for years upon the instructions of my master. He knew from the day you were born that you would someday gain mutate powers as a result of an accident. I tried to treat you then, but you were whisked away by that brother of his.”
“But you’ve been treating me for the past two months.” said Jet.
“That was no coincidence.” said Sadler. “Darkmagus told me that you would be brought into the casualty ward on that day, so I made sure I was on duty that day to treat you. I had to make sure you were in my confidence, Mister Clark. Now do as I say or I will use the power Darkmagus has given me to destroy you!”
“What power? A gun? I can outrun a speeding bullet, as the old saying goes!”
“Not just the power of a gun!”
Suddenly Sadler raised his hand and fired a burst of energy at Jet. He was not expecting this and he had no time to avoid it. The energy caught him square in the chest. Pain flowed through his body as he slumped to the ground. Sadler then got to his feet.
“I never thought it would be this simple!”

The Land of the Gods could be a most wonderful place, and a most peaceful place. On this day, however, the peace was disturbed with a dimensional portal opened. It was a gateway that was used between the planet Earth and the Time of Legends. On this day it was being used by the Celtic God, Lug. He had been summoned to Earth by Magus, and he had agreed to take part in the war against Darkmagus and his forces.
After arriving Lug walked through the forests until he came to his dwelling. The building was tall, befitting of the Gods. As he stood at the doorway he felt something, as if another of the Gods had come to visit.
Lug soon entered the building, and after walking through the splendid entrance hall into what could be termed as a study he soon saw that he did indeed have a visitor. He could tell who it was just by looking at him from behind. His huge girth was easily recognisable. As soon as Lug entered his visitor turned round to face him.
“Dagda!” said Lug. “His visit is most unexpected. I had not thought that the leader of the Celtic Gods would visit me on this day!”
Even though Lug respected the Dagda greatly he could not help his stomach wrenching whenever he saw the Dagda’s coarse features. Dressed in his short tunic and rawhide sandals the Dagda hardly looked like a leader.
“You have just returned from the world of mortal man?” the Dagda said.
“Aye, I have.” Lug replied. “They have asked me to participate in a campaign against the evil of Darkmagus. I have agreed to their request. I have been without a battle for too long.”
“It is that I wish to speak to you about.” said Dagda. “I must ask you to take no further part in this crusade.”
“What reason do you have for asking me this Dagda?”
Dagda turned around and stared Lug straight in the eye.
“I ask you on behalf of Darkmagus himself.”
“Can it be?” shouted Lug. “Has the Father of All been corrupted by evil?”
“I do not wish to harm you, but if I have to I will. I ask you one more time, leave this mortal man’s crusade or you will die!”
“Never!”