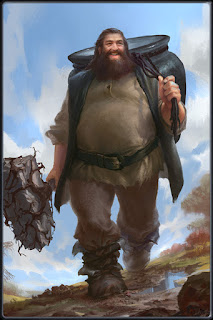 The window on the fifth floor of Guy’s Hospital was smashed to pieces as the red and yellow costumed form of John Clark came flying out. Seconds later it smashed into the ground. Those passing nearby were shocked when Jet’s body hit the ground with a resounding thud. They were even more shocked when Jet began to groan and move after thirty seconds. Another thirty seconds later and he began to get to his feet. One nurse came up to him.
“Are you okay?” shed asked.
There was no time for Jet to answer as he pushed the nurse out of the way as a leaping Doctor Sadler landed on the ground next to him. A jump from five floors up would have severely injured a normal man, but it was now obvious that Sadler was not normal.
“I warned you Clark.” he said. “I told you not to interfere in the work of Darkmagus. I have shown you just a small portion of the power he has given me. I hope that I will not have to show you anymore.”
“Looks like you’ll have to Doctor!”
And with that Jet unleashed with a haymaker blow to Sadler’s jaw. Such a blow would have decked a normal man. Sadler just looked back at Jet and smiled. Jet unleashed another blow, and another, and another, each time using his speed powers to change the angle of attack. Each devastating blow brought the same result - nothing.
“You will never learn, will you?” sneered Sadler. “Your blows are useless against one who has been given power by Darkmagus!”

Lug could still not believe what he had just heard. Could the Dagda, the so-called “Father of All” be one of Darkmagus’ sleeper agents.? It sounded impossible.
“I know what you are thinking.” said the Dagda, dragging his huge girth off the chair. “I have known for nearly a century about this crusade, and it is because of our friendship that I ask you to join me and Darkmagus against the mortals.”
Lug stared at the Dagda. Then, after a few seconds he raised his spear, aiming it at his mentor.
“I thought this day would never come, oh mighty Dagda.” said Lug. “But I must do this!”
And with that Lug hurled his spear at the Dagda. However, with a speed belying his huge girth the Dagda raised his huge club, the weapon he used, and swatted the spear away as if it were a fly.
“There is no need for us to engage in battle.” said the Dagda. “Join me and we can rule the Time of Legends together, for eternity.”
“Rule under the evil of Darkmagus you mean.”
Lug then lunged forward and crashed into the Dagda, knocking his huge form off his feet. Lug then unleashed with a flurry of blows. The Dagda then fought back, grabbing Lug around his beck and tossing him to one side, sending Lug flying up against the wall. The Dagda then got to his feet, and once again took his huge club in his hand. He then began to move towards the fallen Lug, who now lay on the floor motionless.
“I, too, had hoped that this would never happen.” he said. “But I must obey Darkmagus!”
The Dagda then raised his huge club above his head. Lug began to move slightly, but just as the Dagda was about to bring his club crashing down on Lug the goddess Macha appeared in the doorway.
“Dagda! No!” she cried.
The cry of Macha broke the Dagda’s concentration. This was enough for Lug to regain his senses, and with one sweep of his foot he knocked the Dagda off balance, sending him crashing to the floor.

A crowd began to gather as the battle between the seemingly invulnerable Leonard Sadler and Jet continued.
“I never thought this would happen!” said Jet. “I trusted you! I considered you one of my few friends, one of the few I could trust.”
There was no reply from Sadler, he just unleashed a huge lunging blow which caught Jet in his stomach, knocking the wind out of him and sending him crashing to the ground.
“Appearances can be very deceptive young man.” said Sadler.
The Doctor began to move towards Jet and was about to unleash with another blow when Jet suddenly moved out of the way, thanks to his speed powers. Jet then tried with another blow to Sadler, but there was the same effect. Sadler then caught him with another crushing blow, knocking him off his feet. He then began to walk slowly towards Jet. Meanwhile, as all of this happened, the crowd began to disperse as police sirens could be heard in the background. Sadler paid no attention to these noises.
“This will be your last chance Mister Clark!” he said. “Join us or pay the price for opposing us!”
“Never!” cried Jet.
“Then you will pay the price!” shouted Sadler.
Sadler then raised both of his hands high above his head. He was about to finish Jet off when he suddenly heard a gun shot. Less than a second later a bullet ripped through his shoulder, sending pain searing through his body. Sadler turned around and saw a young woman standing nearby with a pistol in her hand, the pistol being pointed at Sadler.
“I will fire again if I have to!” she said.
Sadler sneered at the woman. He then turned around and was about to finish Jet off when five more bullets ripped through his body. A smile appeared on Sadler’s face before he slumped to the ground next to Jet. A glow then covered his body, and a few seconds later he vanished. The woman then ran over to Jet and kneeled down next to him. He was just beginning to come to.
“Who are you?” gasped Jet.
“Sergeant Blaze Fielding of the Met.” she replied. “Someone called us about some madman trying to kill you. Have you any idea who he was?”
Jet stared Fielding in the eye. He did not speak for a few seconds.
“Someone who I considered a friend!”

Lug and the Dagda stood looking at each other as Macha held her sword in front of them, stopping them from battling each other.
“There will be no more fighting on this day.” she said.
“Out of my way woman!” cried Lug. “This so-called God has allied himself with evil!”
“Which evil do you speak of?” asked Macha.
“The evil of the wizard Darkmagus himself!” replied Lug.
Macha turned to the Dagda.
“Is this true?”
“The way of Darkmagus is the only way. Lug has allied himself with mortal men and women in an attempt to stop Darkmagus. For this he must be killed!”
“There will be no killing here today!” said Macha. “But I need to know if what Lug says is true.”
“It is true, my lady!”
Macha turned around to see none other than Ringulrun enter the chamber.
“What brings a member of the Istari to the Land of the Gods?” as Macha.
“I have just been speaking with Merlin on Earth.” said Ringulrun. “Magus tells him that some of his oldest friends have just tried to attack him, and that the Black Riders have been seen in the city called London. Another battle has been seen outside a place of healing.”
“What can these events on Earth have to do here?” asked Macha.
“These events were all caused by Darkmagus.” replied Ringulrun. “What Lug says is true. Why else would the Father of All attack one who has been like a brother to him?”
Macha turned and stared at the Dagda.
“Where you not one of our order I would kill you with my bare hands.”
“But I am not one of you.” said Ringulrun.
Ringulrun pointed his hands towards the Dagda, and a second later the God vanished.
“Tell me wizard.” said Lug. “Where has the Dagda gone?”
“I have merely transported him to another place on the Time.” replied Ringulrun. “He will bother you no more.”
Lug walked out to his balcony and looked out towards the forest outside.
“I hope you speak the truth wizard.”