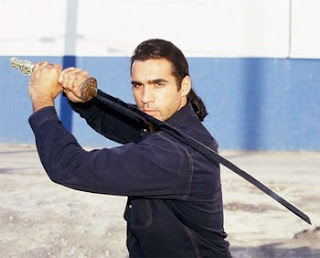 Greytowers Public School in London had never before seen a sight like this. The sight of two flying wizards above their sports field made a few of the pupils panic. One of them, Thomas Leacock, did not panic because he knew who they were. He was surprised by the appearance of Merlin and Gandalf in the sky above them. After a few minutes they landed near Leacock.
“Thomas Leacock.” said Gandalf. “We have chosen six people on Earth to advance the human race, and one of the six is you.”
“The heroes and heroines of Earth join us in asking you to leave this life and enter the future.”
“I don’t know how but I had a feeling something like this would happen.” said Leacock. “I had no idea it would come this soon though. Now I know why Magus has been teaching me about the mystic arts.”

On a lonely street in a Wiltshire village an elderly man walked along, thinking about the events that had transpired over the last few days. The man in question was Detlev Heiss, a native of Germany. In 1943 Heiss, a mutant, was recruited by Darkmagus as one of his agents. One year later, with the help of Magus, he broke free of Darkmagus’ control after his wife was killed. He then served as a member of Anglo-Force until they were disbanded in the mid 1950’s. Now, as news of the Darkmagus threat was carried in the media Heiss began to think back to those days.
“Phineas said that this would happen.” he began to say to himself. “I never thought it would take so long though.”
Heiss continued to walk along for a few minutes, deep in thought about the events. Then he made a decision. Down the road he saw a telephone box. He quickened his walking speed, and a few minutes later he was making a telephone call to the local train station.
“Can you tell me the time of the next train to London please?”

Pain. The first thing Duncan McCloud felt was intense pain surging through his aching limbs as he came out of a deep sleep. He groaned as he moved slightly. He then began to open his eyes slightly. Everything was a haze, as things normally are when people wake up. He could tell that he was no longer on the runway at a Paris airport. Somehow he had made it into a bed. He then looked upwards. There were some people standing over him, looking at him. Could these be Darkmagus’ forces ready to strike again?
“Don’t!” cried McCloud.
“Duncan! Duncan! It’s alright. You’re safe.”
The haze began to clear. His vision was now clear. He recognised the voice that had just spoken those comforting words. He looked upwards and he could see two of his oldest friends, Magus and his fellow clansman, Connor McCloud.
“Phineas! Connor! How did I get here? Where is here? The last thing I remember is being attacking at the airport, being left for dead.”
“If you were not immortal you probably would be.” said Connor. “Your injuries were pretty severe, even for us. If it wasn’t for Magus’ powers you’d still be lying in that bed.”
“Then it is you I must thank.” said Duncan. “But we must do something about Darkmagus.”
“We know all about Darkmagus.” said Magus.
“But he’s gathered together a strong fore. Zachary, Felicia, Kon and his people.”
“He has indeed gathered together a powerful force.” said Magus. “But I believe we have the power to deal with him.”
There was then a blinding flash of light in the room, and when the light died down Merlin and Gandalf could be seen.
“Greetings.” said Merlin. “We have returned form a voyage around the world.”
“We have spoken with four of the six chosen.” said Gandalf.
“That’s great.” said Connor. “But you two have stirred up one hell of a storm in doing so.”
“We anticipated this.” said Merlin. “We told you how Darkmagus and his forces would seek to stymie our plans. That is why we asked Magus to summon the heroes and heroines to protect the Acolytes.”
“They may not have enough time for that.” said Connor. “Most of them have their own problems right now.”
“Then you will all be very busy.” said Gandalf. “Especially once we speak to the last two. We have chosen six people on Earth to advance the human race, and one of the six chosen is you.”
“A member of Anglo-Force?” said Magus.
“The heroes and heroines of Earth join us in asking you to leave this life and enter the future…Duncan McCloud!”
“Me? You can’t be serious? You want me to join the Istari? But I’m immortal! I can’t possibly…”
“Nonetheless we would like you to join us. You can contribute greatly. You are needed.”
“But there are other immortals who would still hunt me.”
“They would cease to do so once you become one of us.” said Merlin.

And so there remained just one more to contact.
Dentonville Prison’s newest resident was getting restless. Mother Nature had been taken to the prison after her capture by Anglo-Force, but since her arrival she had been exhibiting insane tendencies. This worried the resident doctors so much that they began to watch her all the time she was in her cell.
“I tell you, he visited me!” she ranted. “He spoke to me about the future!”
“I’m sure he did.” one of the doctors replied.
The doctor then turned to consult with his colleague.
“I recommend we double her medication.” he said.
“Agreed. I have no idea she could be like this.”
The two doctors then began to walk away.
“You don’t understand, do you?” Mother Nature shouted. “He’s waiting for me. All of them are. I’m the one the Istari can us. I can use them! I can use them to gain my power!”