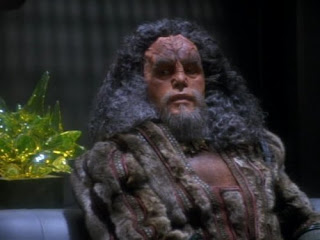 The Babylon 5 council had been called into meeting, once again to discuss the growing tensions between the Centauri Republic and the Narn Empire. This time the dispute was over colonies, most notably colonies along their border.
“The Narn colonies fall into Centauri space, according to the treaty that was signed between our two governments!” Mollari argued.
“That is not so!” G’Kar replied. “Any interstellar chart will show that the Narn colonies are on the Narn side of the border!”
Sheridan had had enough. In his short time in command of this station Mollari and G’Kar had been at each other’s throats constantly.
“Gentlemen! I will not stand by and watch you two engage in a shouting match!”
“Nor I!” Delenn added. “Surely there is some way we can resolve this matter!”
“Not while G’Kar stays as stubborn as ever!” said Mollari.
“Stubborn? Me?” said G’Kar.
G’Kar was about to insult his Centauri counterpart when his communicator sounded. He was not happy with this interruption.
“This is G’Kar!” he said, taking his communicator in hand.
“This is Na’Toth. I am sorry to disturb you Ambassador, but there is an urgent transmission for you from Homeworld.”
“Can’t it wait?”
“No Ambassador. It is General T’Llar.”
G’Kar turned to Sheridan and was about to adjourn the meeting with Sheridan adjourned the meeting. Shortly afterwards G’Kar arrived in his quarters, and Na’Toth left as the image of Narn General T’Llar appeared on the screen. G’Kar bowed his head.
“What can I do for you General?” he asked.
“I have just received a report from the rim, where the cruiser was sent following your report on the strange vessel.”
“And?”
“The cruiser was destroyed, apparently by the same sort of vessel you encountered.”
“But there were nearly two thousand crew on that ship! How could this happen?”
“That we do not know. All we can tell is that it must have been a powerful vessel to have done this to a Narn war cruiser!”
G’Kar’s head bowed low, the shock of the event hitting him.
“Thank you General. I will contact you later.”
The screen went blank. A few seconds later Na’Toth entered.
“Captain Sheridan wants to know if you want the session to start again.”
G’Kar paused for a moment before he gave his answer.
“Tell Sheridan…tell him I wish to see no-one today.”
Na’Toth could clearly see that G’Kar wanted to be left alone. She then made her exit and relayed G’Kar’s wish to Sheridan.

All was normal in the Operations Room on Deep Space Nine. Lieutenant Dax looked up as Major Kira arrived on the turbo lift.
“Major, we’ve just received a transmission from Captain Spalding of the Pinafore. He says they’re going to be here six hours late. They’re answering a distress call.”
Before Kira could reply O’Brien alerted her to something.
“I’m picking up enhanced neutrino levels from the wormhole. Something’s coming through.”
“On screen.” Kira ordered.
The familiar sight of the wormhole opening appeared on the screen before them. They watched as what looked like a small one-man vessel emerged from the Gamma Quadrant.
“Configuration matches nothing in the files.” O’Brien started. “Wait! I’m picking up a transporter beam. They’re trying to beam over.”
“Raise shields!” ordered Kira.
The shields were raised, but the transporter beam still got through. Seconds later a fearsome-looking warrior stood before them.
“Put up a force field around him.” said Kira.
O’Brien complied. The warrior did nothing.
“Who are you?” Kira asked. “What do you want?”
To their amazement the warrior walked through the force field, rendering it inoperative.
“My name is not important. All you need to know is that I am one of the Jem’Hadar, and that we will no longer stand idly by while you violate our side of the anomaly!”
O’Brien tried to establish another force field but found that he could not.
“We are holding your Commander Sisko and his friend.” the warrior continued. “Any attempt to rescue them will result in their deaths. Any more violations of our territory will also result in their deaths.”
The warrior then reached into his pocket and took out a small computer pad. He threw it onto the table in front of Kira.
“Where did you get this?” she asked.
“From you colony on our side of the anomaly. It contains a list of all of your vessels we have destroyed on our side. They, and the colony, did not put up much of a fight.”
Kira picked up the pad and read the ship names. The warrior was right. Each ship listed on the pad had gone through the wormhole after stopping at the station.
“You won’t get away with this!” she said.
“We already have. Now remember, any attempt at a rescue will result on the death of your Commander!”
And with that the warrior activated his transporter beam and was soon back aboard his ship. Seconds later it was re-entering the wormhole. The warrior had accomplished his mission - he had delivered the warning and left the station crew shocked.
“Get me Captain Spalding on the Pinafore!” Kira ordered.

If John Sheridan didn’t have enough problems another one had just walked through customs in the shape of a tall, mighty Klingon warrior.
News of this fearsome Klingon’s arrival soon reached Sheridan, and he made his way to the customs area where he saw the Klingon bellowing at a low-ranking officer. Sheridan soon stepped in to stop the confrontation.
“I’m Captain John Sheridan, senior station officer. Is there anything I can do to…”
The Klingon turned his attention to Sheridan and stared into his eyes. If he had been seventy years younger the Klingon would have struck fear into Sheridan’s heart. These days however the stare didn’t quite have the same effect.
“My name is Kang. I cam here for one reason only. I seek Magus!”
Sheridan couldn’t believe his ears.
“Let me guess.” he said. “Eighty years ago you took a blood oath with Magus to hunt down and kill a Klingon criminal.”
“How did you know?”
“Because our new Klingon ambassador, Kor, told me the same thing!”
“Kor is nothing more than a drunken old fool! Perhaps that is why Magus liked him so much!”
“Perhaps you’d better tell me the whole story!”
“This is really of no concern of yours Captain Sheridan. All I seek is the one known as the Albino, and I have found him, on a Federation planet!”
“A Federation planet? Are you sure. If this ‘Albino’ was a criminal wanted by your government then surely he would have been deported!”
“That is what I thought! That is the reason I am taking this matter into my own hands, and that is why I seek Magus!”
The two soon arrived at the main bar, and they soon saw Kor, seated at the bar with a glass of Aldebran whisky in his hand.
“It seems we have found the Ambassador.”
Kang took one look at Kor enjoying himself and walked away. Sheridan was not far behind.
“Where are you going?” he asked. “Don’t you want to see him?”
“Leave him to enjoy his ‘fun’! When he is ready tell him to meet me at station Deep Space Nine. It is there I must meet the last of us!”
Kang strode off, leaving Sheridan in his wake. Sheridan was surprised when Kang went straight back aboard his ship. Minutes later and he was gone.