When Phil Collins Was a Labrador 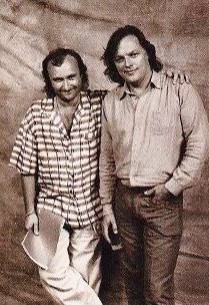 Here’s something for you dream interpretation peeps out there, although I doubt you’d be able to tell me what this means exactly.

The other night I dreamt that Pink Floyd legend David Gilmour had moved in next door, and being a fan I decided to pay him a visit. I found him sitting in a deck chair in the front garden, enjoying the sunshine with a Golden Labrador dog laying on the ground nearby.

Gilmour told me that the dog was actually Genesis legend Phil Collins, who had taken on the form of a dog to help him with the constant pain he suffered because of his long-term back injury.
It turned out that Collins could take on the form of a dog when he was touched by a white Lavatera shrub. The change occurred when a single stem suddenly sprang out of the ground and touched Collins, turning him into a dog and easing the pain of his injury. It then retreated back into the ground as fast as it had sprouted.
I then got to see the change for myself when the Lavatera sprang up again and touched Collins, reverting him to his human form. The stem then went a bit wild and accidentally touched a passing Border Collie for a few seconds, turning her into a rather unkempt-looking old woman. Both Collins and the Collie/old woman then stopped a Jehovah’s Witness from knocking on the front door and bother Gilmour.
So what caused me to have this rather strange dream? Was it because I’m a fan of both Pink Floyd and Genesis? Or is the cocktail of drugs I take for various ailments finally catching up with me?
Posted by Julian Radbourne at 22:56:00