The Two Sheds Mix Tape 43: The Music of Russ Conway 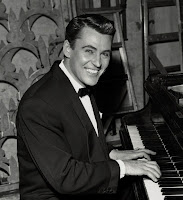 Over the past few weeks I’ve given you Mix Tapes featuring music legends, heavy metal icons and various other rock-themed compilations. This time around though I’m going to give you something a little different - The Music of Russ Conway.

For those of you who don’t know who he was, Russ Conway was an English pianist who enjoyed tremendous success between 1957 and 1963. He hit the UK charts twenty times during that period, scoring two number ones. Such was his success that in 1959 his singles spent a combined total of 83 weeks in the chart.

I have to admit that I never really paid much attention to Conway’s music when I was younger, even though my parents liked his work. They had quite a few of his songs on various records they’d brought over the years.
Why am I dedicating a Mix Tape to him now? Well, the other day his piece “China Tea) got stuck in my head for some reason. The tune’s actually quite catchy, so I thought what the hey, let’s give the man the Mix Tape treatment. So I looked in the archive on my flash drive and saw that I had tons of stuff in my UK singles and EP charts folders.
So here for you is a collection of those songs that made the hit parade from one of the most successful musicians of his time.
1) Party Pops Medley
2) Got a Match
3) More Party Pops
4) The World Outside
5) Side Saddle
6) Roulette
7) China Tea
8) Snow Coach
9) More & More Party Pops
10) Royal Event
11) Fings Ain’t What They Used to Be
12) Lucky Five
13) Passing Breeze
14) Even More Party Pops
15) Pepe
16) Pablo
17) Say It With Flowers (with Dorothy Squires)
18) Toy Balloons
19) Lesson One
20) Always You & Me

You can listen to this Mix Tape by visiting https://www.mixcloud.com/julian-radbourne/the-two-sheds-mix-tape-43-the-music-of-russ-conway/

You can also listen to the entire Two Sheds Mix Tape collection at https://www.mixcloud.com/julian-radbourne/playlists/the-two-sheds-mix-tapes/