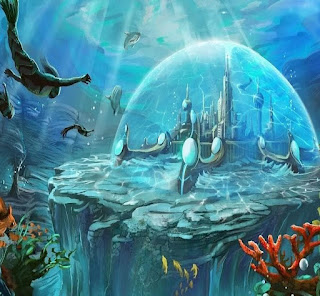 Prince Aldair, son of Atlantis’ monarch, Prince Poseidon, sat in his quarters in the royal palace. Aldair had been told to stay here while his father helped Magus and Connor McCloud in in the recovery of Thomas Leacock. Aldair had received word from his father telling him of their success, but the youngster grew board. After all, he had been summoned along with his father by Magus, and so far he had done little in this war with the forces of Darkmagus.

All of these thoughts came to Aldair as he looked out across the vastness of the city. In fact he was so wrapped up in his thoughts that he almost failed to notice something happening. Outside Atlantis’ main dome there was a huge explosion. The very foundations of the city began to shake as if an earthquake were shaking the ocean floor. At last some action Aldair thought.

Emergency measures were carried out in order to preserve the safety of the population. Aldair now left his quarters, and outside the dome he could see what was left after the explosion. Dust and sand from the sea bed had been sent all over the place. The view was somewhat obscured. So the young prince made his way to the main entrance to the city. His father would have probably told him to stay inside the dome, but then again his father was still on the surface.

Aldair was considered one of the best swimmers of his generation, and it didn’t take him long to reach the sand cloud. At first he could not see a thing. The cloud soon dispersed however, allowing Aldair to see what it obscured. At first he couldn’t believe his young eyes. It looked like some sort of craft. In some ways it resembled a submarine, but in others it did not. Aldair soon found a few of the windows. He peered inside but could not see anything. It was obvious that there was no power inside.

Meanwhile, Poseidon had returned to the main dome to find his kingdom in some disarray.
“What is happening?” he asked.
He was soon approached by the pro-consul.
“There was an explosion outside the dome.” he said. “It shook the entire city. We are taking the emergency procedures.”
“Where is my son?”
They were soon approached by another.
“I saw your son near the main entrance. I think he went to investigate the explosion.”
“The young fool!” said Poseidon. “Carry on here, I’m going to look for him.”

Poseidon was soon outside the dome. By the time he was outside the sand cloud had all but gone. He soon saw Aldair swimming near the strange vessel. They were soon together.
“You young fool!” said Poseidon. “You should have stayed in the city. There may be danger here.”
“So far I haven’t found any.” said Aldair. “All I found is this strange ship, whatever it is.”
Poseidon peered into the window. He saw exactly what Aldair had seen.
“There’s no power.” said Aldair. “Probably because of the explosion.”
“There are no vibrations, so there’s no movement inside.”

Poseidon then swam to the other side of the vessel. He soon found what he was looking for - the entrance. Poseidon than grabbed hold of whatever he could and used his great strength to wrench the door off. He was amazed when the ocean did not go flooding into the compartment.
“It may be some sort of airlock.” said Aldair. “Which may mean we can’t get inside.”
“We can try.”
Poseidon then moved forward and proved his son wrong. The two of them were soon inside the ship. Poseidon moved towards one of the control panels.
“This panel looks familiar.” he said. “It looks like one Magus as Craigmillar.”
Aldair walked to another part of the compartment where there was someone sitting in a chair. Aldair turned the chair around and expected to find a dead body seated there. What he did find was shocking. He called to his father, who soon joined him.
“This is one of Darkmagus’ androids!” said Poseidon. “No wonder that panel looked familiar. It’s Istarian technology. This submarine belongs to Darkmagus!”
“Maybe we should take it back to Atlantis.” said Aldair. “We can study it there.”
“No. I know a better place for this craft. There are some at the Anglo-Force mansion who have a greater knowledge than out scientists. They may understand it better.”
“Finally I get to go there again!”
Poseidon turned and stared at his son.
“You must learn patience. This world of outs faces a great threat. We must not run into these things blindly. Now come, we must try to restore power to this craft.”

High above the county of Norfolk Magus flew, deep in thought. He didn’t need his powers to tell him something was wrong. He could sense great evil. The evil was coming from his destination, a small town on the north Norfolk coast.

From the sky above he could soon see the town of Cromer. It was from Cromer he could feel this strange disturbance. But from the air everything looked normal. Magus began to swoop low over the streets. He soon passed the “Welcome to Cromer” sign. Still everything seemed normal, but wasn’t. Soon he was in the heart of the town. It was then he saw the strange sight. Every street was deserted. There was not a soul in sight. Again he got the strange feeling, the feeling of evil. It seemed to be coming from everywhere, from every building, every house.

It was later that evening that Watt sat with his parents at their home. Samantha Hetrick was also there. They sat talking when Magus entered.
“These people want to hear the rest of the story.” said Watt. “The explanation of all that’s happened here.”
Mrs. Watt turned to Mr. Watt.
“So this is Magus then?” she whispered. “Doesn’t look all that impressive, does he?”
Mr. Watt motioned for his wife to be silent.
“What I can’t believe is all these terrible things that have been going on right under our noses all of these years.” he said.
“Merely an indication of the thoroughness of Darkmagus, Mr. Watt.” said Magus. “Remember, Miss Hetrick and the others had no idea they were being used in this fashion. There was nothing in their behaviour to expose their master’s plans.”
“That’s the part I’m finding the most difficult to comprehend, Doctor.” said Samantha. “I have no memory of leaving Cromer, going to London. None of it.”
“Nor are you ever likely to Miss Hetrick.” said Magus. “Darkmagus created in you…and the others…a duplicate personality. Possessed of all the knowledge and experience of the original, but subservient to him. Thus you have no recollection of what you did under Darkmagus’ influence. For all intents and purposes that was not really you.”
“But I still have my memories of my friendship with Jim, and many other things.”
“You remember those because you were not under Darkmagus’ control all of the time.” said Magus. “But I am afraid the others will not. They will not recall, either, their experience in the spirit world, since that, too, was a creation of Darkmagus.”
“Yes Magus, I see that now.” said Watt. “It was all part of his overall plan to keep me busy, out of the way, to have me wasting my time mourning for all my ‘dead’ friends, while his forces continued with their plot against the Acolytes. They thought they’d covered every contingency, everything, in fact, except the timely arrival of a certain Phineas Magus.”
“And speaking of the Acolytes, James, it is time we departed. There will doubtless have been considerable activity while we have been here.”
“You’re right Magus. At least I can leave knowing things are back to normal here.”
A few seconds later Watt and Magus took to the sky, being watched by the others as they left.
“Take care!” said Mr. Watt.
“I will Dad.” said Watt. “Take care of Sam for me.”
“We must hurry James.” said Magus. “I sense great trials ahead.”
And so the two of them flew off into the distance.