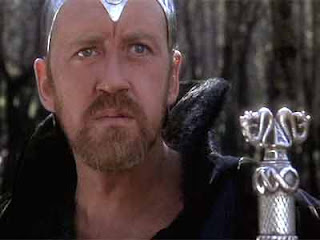 Many people had managed to scale Mount Everest during the past half century, but none of them had seen a special place that was located on this mountain, mainly because this place was cloaked from normal view. The place in question was the citadel and home to the Over-Seer of Earth’s events, one of the most powerful beings in this world - Rhiannon.
For nearly one hundred years she had watched the events of the world from her citadel, and when times were dire she intervened. She had to intervene in an event recently, when the power-mad Supremus defeated the members of Anglo-Force. She then had to use her powers to erase the short-term memory of James Watt, because even though she watched the world’s events her presence should never be known.
Walking through her vast citadel she looked around at the computer banks which lined the walls. In these banks were contained almost every piece of information known to mankind. One special computer documented the histories of the world’s heroes, their endeavours, their ultimate fight against evil.
“For all my power boredom still attacks me.” she said to herself. “I long for the time I can reveal myself to the world, for the time I can come out from behind my cloak.”
Then Rhiannon looked onto one of the computer screens.
“I see that Phineas Magus has returned to Earth, and this time he has brought Gandalf and Merlin with him also. Perhaps now is the new time Magus once spoke to me of.”
Then there was a loud buzzing and beeping noise from one of the nearby data banks. Rushing over she soon found out it was coming from the databanks that housed the secrets of the super-heroes. Try as she might she could not stop what was happening - an outside source was actually tapping into her computing system and stealing some information. Somehow she knew this had something to do with the arrival of Merlin and Gandalf. She knew she had to act. Leaving her citadel she then took to the skies.
Little did she realise that the information was travelling to a point over a million miles away, to the Earth’s neighbour planet, Mars. On Mars was another of Darkmagus’ bases. It was here he had now returned. He sat in a chair facing a computer screen. He smiled as information about the super-heroes secrets appeared on his screen. A short time later he was joined by Felicia Martins.
“I see you’ve managed to break into Rhiannon’s computer.” she smiled. “Is this the info on the heroes?”
“It is.” Darkmagus replied. “Soon phase one of my plan will begin.”
Darkmagus switched off the computer screen and turned to Felicia.
“What about the preparation?” he asked. “Have all of the sleeper agents been programmed with their new orders and sent back to Earth?”
“Nearly all of them, but we lost one.”
“Who?”
“Terrence Hogan. The guidance system on his sleeper ship exploded. It was last seen heading towards Saturn.”
“Never mind. Hogan wasn’t that important anyway. I doubt if Peter Tompkins will be contacted by the Istari anyway.”