A Leap Too Far - Chapter One 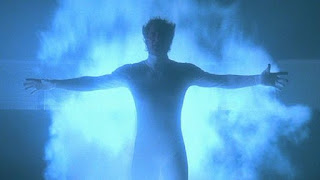 Captain James Watt had absolutely no idea what was going on. One minute he was on the bridge of the Valkyrie, a Monstron Satan-class ship staring him down the throat, and the next he was in this strange white room. Even his familiar red and black Starfleet uniform had gone to be replaced by something that resembled a white body stocking and a white doctors coat. Watt looked around the room and saw what appeared to be a psychiatrists couch in front of him.
“Is anybody here?” he called.
There was no reply. Watt called again. He got the same response. He walked over to the couch and leaned against it. Could this be a trick of the Monstrons? Perhaps some new weapon of which Starfleet had no previous knowledge. He had no idea what was happening to him.

Sam Beckett had leaped into may lives before, and done many things, but of all his leaps this one seemed the strangest. He was garbed in what appeared to be a red and black uniform. He looked around and there were others dressed in a similar manner. In front of him was what appeared to be a huge television screen, and on the screen was what seemed like a giant space ship. Everything around him seemed like some science fiction movie. Then a man wearing the same colour uniform as his approached him.
“The Monstrons are waiting for you call Captain.”
Beckett looked at the man. He was totally confused.
“Oh boy!”

Watt walked along each wall, if you could call them that, trying to look for a door or some sort of opening. It seemed a hopeless search. Despaired Watt walked over to the couch and sat down. Then, in front of him, a door opened, but it was not the sort of door he was used to. Instead of opening from the side it opened from the bottom and went up. Through the door walked a man dressed in a bright red suit with a cigar in his mouth. The man looked as if he was in his fifties. In his hand he was holding some sort of implement. It resembled the tri-corder that Watt had used many times before. When the man saw Watt he smiled. He then walked over.
“This may seem like a stupid question, but…who are you?”
“I am Captain James Watt of the U.S.S. Valkyrie. I would like to know the same of you.”
“My name isn’t important. You see, we haven’t got any record of you, that’s why I asked your name. There must be some glitch somewhere.”
The man rubbed his head. He seemed confused.
“You say you’re the captain of the Valkyrie. I’ve never heard of that ship before.”
“The U.S.S. Valkyrie is a Wagner-class starship, registration number N.C.C. 1058.”
The man looked shocked.
“Starship?” he shouted. “What year were you born in?”
“In 2315.” Watt replied.
The man pressed a button on his implement. The door opened again.
“Gushie!” he shouted. “You’ve made a big mistake this time!”

Beckett stood motionless, staring at the screen. The man beside him was getting more and more impatient.
“You have to make contact with them soon Captain.” he said.
He looked at Beckett, and was now very confused. Then Beckett seemed relieved when he saw a white doorway open and his holographic friend Al walk through. He approached Beckett.
“Sam, Gushie has messed up big time on this one!”
Al looked around. He was surprised at what he saw.
“This looks like something out of an old sci-fi movie.” he said. “Come on Sam, we’ve got to talk.”
Beckett turned to the man beside him.
“You have command. I’ll be…in there.”
Beckett pointed to the entrance of the ready room. Everyone else on the bridge was now very confused by this odd behaviour.
“What about the Monstrons? They’re waiting for you to contact them.”
“I’ll do it later!” Beckett said, entering the ready room.
The door opened automatically, surprising Beckett. When he entered the ready room he started to pace up and down.
“What’s happening Al?” asked. “Who, and where am I?”
“You’re not going to believe this, Sam. You’ve leapt into the body of Captain James Watt. I think you’d better sit down before I tell you the rest.”
“Why? What’s happening?”
“Okay, but don’t say I didn’t warn you. You are currently in command of the U.S.S. Valkyrie, registration number 1058.”
“There is no U.S.S. Valkyrie in whatever year this is. I’ve never heard of it!”
“There isn’t in the twentieth century.” said Al. “But there is in the twenty-fourth century!”
Beckett’s Jaw dropped. He started making motions with his hands.
“You mean that Gushie…instead of sending me…sent me forward…four hundred years? How does Gushie know?”
“Gushie thinks that Ziggy’s blown a fuse somewhere.” said Al. “He can’t figure out what’s happening. And the only Captain James Watt we have on file is some guy who used to be in the Royal Air Force who now flies freelance. The guy in the waiting room looks nothing like that guy and says he was born in 2315.”
Beckett sat down on the sofa. A slight smile appeared on his face.
“I never dreamed that I would ever be able to go forward in time.” he said. “I originally designed Quantum Leap to take me through my own lifetime, but I never thought this would happen!”
“Yeah, well it did. Now all we’ve got to do is find a way of getting you out of here!”
“Wait Al. Did you ever think that I may have been sent here for a reason, that there may be something I can do?”
“What? You mean Ziggy sent you here on purpose?”
“It could be!”
“Sam, you were born in 1952. You are over four hundred years out of your depth on this one. Now I’m gonna go back and try to find a way of getting you out of this.”
Al pressed the button on his device and the door to the waiting room opened.
“Al, wait! If I’m right about this, and I nearly always am, talk to the guy in the waiting room. He may be able to give as a clue as to why I am here.”
“I told you Sam, it’s one big mistake!”
Then a noise could be heard from the door.
“What’s that?” asked Al.
“Sounds like a doorbell to me.” said Beckett. “Come in.”
The door opened and Ambassador Magus entered. He was about to speak when suddenly his expression changed upon seeing Beckett/Watt. For once in his long life he seemed dumbstruck.
“Err…Commander Pendragon told me you were in here Captain. He wants to know when you’ll be contacting the Monstron ship.”
Beckett looked up at Magus. A rye smile appeared on his face.
“I had a feeling you might be here.” he said.
Magus looked around the room. For a moment he thought he saw another figure in the room, but the next second it was gone. He looked back at Beckett/Watt.
“If you want to I can help you during the transmission.” he said. “I have a feeling that you’ll need all the help you can get.”
Beckett paused for a moment.
“Is there any way we can put them off?” he asked. “Tell them I’m sick or something. I need more time to prepare.”
“Certainly Captain.” said Magus.
Magus walked over to the desk and switched on the computer terminal He keyed in a few things and then turned to Beckett.
“I’ve now accessed the necessary files.” he said. “It shouldn’t take you long to study them, seeing as you’ve just acquired a photographic memory.”
Magus walked towards the door.
“If you need anything else just press your communicator.” he said.
“Thanks.” said Beckett.
Magus left the room. Beckett walked over to the table and sat down. He looked at the computer screen. The screen did not show anything about aliens or anything like that. The screen was a service record of Captain James Watt, the man whose life he had just leapt into. A smile appeared on Beckett’s face.
“You sly old dog Magus. You haven’t changed in over four hundred years!”