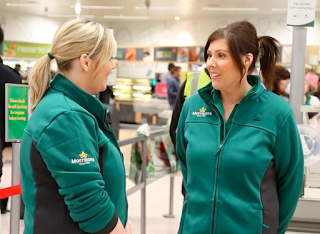 There’s an old saying - clothes maketh the man - and that’s certainly true if you’re a key worker using public transport at the moment.

I recently started work for Morrisons again. This time around I’m working as a picker, picking out online orders for home deliveries. I’ve mainly starting at 5am, although I’m doing 4am starts now, often finishing some time between 9am and 11am, depending on when I start. So as you can imagine I’m quite tired when I finish my shift, and even though I only live about a mile or so from the store I get the bus home.

In recent weeks though I’ve seen a distinct attitude change among some of my fellow travellers, most of whom are of a certain age. You see, when I first started getting the bus home I used to get some awkward looks, but that all changed a couple of weeks ago.
Why was this I hear you ask. Simple really. The attitude changed because I began to wear a different jacket.

When I first started back I wore my denim jacket, and when I got on the bus some of the old duffers on there use to give me dirty looks, a king of “what’s this young bloke doing taking the bus?”*

Then I got my Morrisons work jacket, like the one you can see here in the photo, except that these lovely ladies aren’t wearing their name badgers, and they don’t have badges identifying them as “key workers”.

So instead of wearing my denim jacket I began wearing my Morrisons one, and the attitude change was almost immediate. Nobody batted an eyelid when they saw a Morrisons key worker getting on the bus and sitting near them.

But should it really matter what jacket I’m wearing while travelling on the bus? Apparently it does to some.

*By the way, I’m not really a young man anymore. I turn fifty this year!