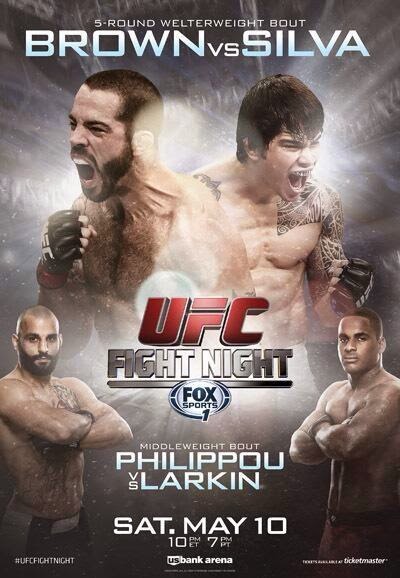 It's time to step back into the Octagon as we take a look at the latest offering from the UFC, with Matt Brown taking on Erick Silva in the main event of their latest Fight Night, shown live in the early hours of this past Sunday morning on BT Sport here in Britain.

We begin in the flyweight division with Chris Cariaso taking on Louis Smolka.

This proved to be a rather intriguing three rounder. Smolka came into this one with a height and reach advantage, but he never really used those gifts at all, and it was Cariaso who had the better of the exchanges.

The first round saw both fighters jockeying for position against the fence, with Cariaso going for a choke as the round came to an end. It was a sign of things to come as Cariaso took a measure of control from the second round onwards. Whenever Smolka took the fight to the ground Cariaso always looked for submissions, and this allied with his sound striking meant that Smolka went into the third needing a stoppage.

That seemed to spur him on a little as he enjoyed his best round of the fight. His striking was better and he took the mount when the fight went to the ground. But once again Cariaso looked for a submission or two, and Smolka seemed at a loss as to what to do to put his man away.

As for the judges they couldn't agree as Cariaso took the split decision.

It was all the way up to the heavyweight division for the next fight as Soa Palelei took on Ruan Potts.

The big boys began with a brief feeling out period until Palelei scored with a great looking takedown, and although Potts managed to escape for a few seconds Palelei quickly regained control, and while Potts went for an arm triangle Palelei managed to survive that particular scare before taking the mount, the ground and pound ending after just a couple of shots when the referee stepped in to give Palelei the knockout win.

The first welterweight fight of the show saw Neil Magny going up against Tim Means.

The last fight of the show to go the distance proved to be a very good affair. Both fighters put on credible displays, although for the most part Magny just seemed a few steps ahead of his opponent.

Magny enjoyed a great deal of success with his striking, particularly in the first round when a left sent Means backwards and into a cartwheel, but it wasn't all one way traffic though. There were a couple of times when Means had his man in real trouble against the cage when he connected with a couple of knees.

Magny was able to come back each time though, and when he added to his takedowns in the final round and maintained control to the end of the fight it was proof once more of how good he'd been.

Which meant more work for the judges as Magny took the unanimous decision.

Fast-paced action was the order of the day in this encounter as both fighters looked to impose their will on the proceedings. The strikes often came in quick bunches, with Cruickshank trying to add a few kicks into the mix as he went on.

But just when it looked like this would go for a while Cruickshank connected with a left kick to the head that sent Koch crashing. Cruickshank quickly followed him down, and with Koch offering nothing in response to the barrage of blows the referee wisely stepped in to give Cruickshank the TKO win.

This certainly proved to be an explosive encounter. Larkin began with a couple of leg kicks. Philippou soon put him in his place when he cracked him with a left that sent him back a few paces.

From there they unloaded with the big bombs. It wasn't an all out swinging for the fences kind if exchange. Each blow was measured, and each man enjoyed a great degree of success, but when Philippou landed with a left/right combination Larkin fell like the proverbial sack of spuds. No ground and pound was needed as the referee stepped in to give Philippou the knockout win.

I think the best thing I can say about this fight is WOW! These guys obviously hadn't heard of the concept of the feeling out period because they went all out as soon as the fight began, and those opening exchanges were a sure sign that we were going to be in for a hell of a fight.

Silva's best moments came early on when a body shot gave Brown some trouble, and when he took the fight to the ground and took his man's back he went looking for a rear naked choke. Brown managed to survive this scare and came back immediately. His combinations gave the Brazilian no end of trouble.

Brown continued his great work into the second round. While Silva seemed to look for that one blow that could end the fight Brown favoured combinations. His tactics were spot on. As the old saying goes he was essentially beating Silva up. It wasn't just his striking though, and the way he just threw Silva to the ground was a thing of beauty.

As the third round began it was obvious to anyone with the gift of sight that Silva was there for the taking, and although he went looking for a triangle after Brown scored with the takedown it was just a matter of time, and after Brown scored with a torrent of blows Silva turned on his side. That was enough for the referee as he stepped in to give Brown the TKO win.

In conclusion - I have to admit that I considered skipping this show because of the ever growing number of DVDs I've got to review (that's why I don't review the preliminary fights any more), but after these fights I'm more than glad I decided to watch this one.

This was a great show. There were great performances all round as all of the main card fights delivered. But despite the great undercard performances this show will always be remembered for that main event.

That definitely was worth the price of admission alone, and up until that point I was kind of sure that my fight of the night award was going to the Philippou/Larkin middleweight fight. Then Erick Silva and Matt Brown had to steal the show like that, which made it a no-brainer who was going to get the no-prize this time around. It's also a no-brainer that it will end up as a nomination for fight of the year in various online polls in a few months time.

So with all of that being said there's just one more thing to do, and that's to give this show the big thumbs up.
at May 12, 2014