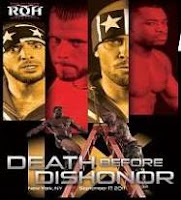 It’s time to step into Ring of Honor territory once again as we take a look at the DVD release of their most recent internet pay per view, with the Briscoes taking on the All Night Express in the main event of Death Before Dishonor IX.
Tag team action began the show as the Embassy’s Tommaso Ciampa and Rhino faced off against Homicide and TV Champion Jay Lethal.

This was one of those short and sweet encounters that has become a tradition in ROH over the years. It didn’t last long but it was full of action.

All four men put in good performances here, with Lethal and Rhino the best of the bunch for me. Everything the Man-Beast just looked so great.

Homicide and Ciampa weren’t far behind them though, and these two were involved in the finish as Prince Nana’s crown jewel took the Notorious 187 down with his power bomb into a back breaker move for the winning pin. Hey, I know it has a name but I can’t remember it!

The Embassy jumped into the ring after the bell, attacking Homicide like a pack of hyenas until Lethal came in swinging his title belt like a bola, sending the dastardly heels running for cover.

Special Challenge Match #1 saw Mike Bennett, accompanied by his trainer Bob Evans, taking on one half of the Tag Team Champions Shelton Benjamin.

This was another one of those encounters that you can’t go wrong with. Bennett did a great job here, getting the fans to absolutely hate him just by walking into the ring.

The action was top notch throughout, with Benjamin putting in his usual performance and Bennett proving to be a great foil for him, with Brutal Bob’s cameo appearances working out well.

Evan’s interference ended up costing him physically after he put Bennett’s foot on the ropes while Benjamin went for the pin. The former gold standard soon took care of the trainer before taking care of Bennett with his jumping face plant for the pin. You know, I wouldn’t mind seeing old Shelton going for one of the singles titles in the near future.

It was back to tag team action for the next match as the Bravado Brothers, Lancelot and Harlem, Future Shock, Adam Cole and Kyle O’Reilly, and the Young Bucks, Nick and Matt Jackson, competed in a three-way elimination match.

Fast paced action was the order of the day in a match in which all three teams excelled.

It began with the Bravados instigating a mass brawl which soon saw all six men take to the air. It eventually settled down as the Bucks and Shocks took turns teaming up to take the brothers down.

The Bravados were the first to bite the dust at the Shocks took Harlem Bieber down with their version of total elimination.

This gave the fans the match they wanted to see as the former Generation Me showed us what they weren’t allowed to do in TNA.

For a few short minutes we were taken on an exhilarating ride with the fast paced encounters, and if the action had been any faster it would have become a blur.

The victory went to the Bucks after they took Cole out with a top rope 450 followed by a moonsault. The Jackson boys then refused to adhere to the code of honor, much to the dismay of those in attendance.

Then it was back to singles action as El Generico faced Jimmy Jacobs.

The former cult leader, like his buddy Steve Corino, was looking to gain a little redemption in his career, and he did just that, putting on a great encounter with the generic luchadore.

It was an extremely well executed back and forth affair, and Jacobs even went back to his furry boot past at one point, breaking out a huss after one exchange.

But even though there was a ton of great action in this match there was no actual finish. As both men lay in the ring none other than Kevin Steen emerged through the crowd, taking the microphone to taunt both men before it was abruptly cut off.

Eventually a slew of bodies came down to the ring in an attempt to remove him from the building, but all hell broke loose when Jacobs decided to take matters into his own hands as he jumped off the ring apron and attacked Mr. Wrestling.

Even Generico decided to take a pop at his former partner, but he ended up taking out everyone else instead. Steen had managed to escape into the ring, and for a moment it looked as if the powers that be were going to calm him down.

They didn’t though, and after Steen went to power bomb some authority figure (I didn’t catch his name because of all the shouting) more hell broke loose, and even Jim Cornette tried to take a few shots at Steen before he was carted away through the crowd.

The result of the match? It was never actually announced!

Special challenger match #2 saw Michael Elgin, accompanied b Truth Martini, taking on the other half of the Tag Team Champions, Charlie Haas.

Haas began his night’s work by outwrestling the unbreakable one, but it wasn’t long before Elgin took the upper hand with another great display of power.

The tag champ had to up his game a notch or so to keep up with Elgin’s powerful attack as they began to unload with the heavy stuff, Haas at one point emulating his former mentor when he took Elgin down with a series of back suplexes.

Although Elgin put up a good fight the experience of Haas won out in the end, getting the winning pin after taking Elgin down with a massive lariat clothesline.

For those of you not familiar with the rules, the first fall is pins only, the second is submissions only, third fall is a 15 minute iron man match.

I really can’t speak too highly about this match, I really can’t. For nearly an hour these two fought tooth and nail to prove just who was the better man in a match that was even better than their World title encounter.

Strong took the first fall, getting the pin after taking Edwards down with his suplex into a double knee back breaker move. Edwards evened the score when Strong tapped out to the Achilles lock.

Then came the iron man portion of the match. Despite their best efforts they just couldn’t put each other away, even when Strong took Edwards down with a Gibson driver on the metal ramp.

As the lime limit neared there were numerous near falls, and when Strong went for a backslide Martini held Edwards’ foot so Strong could score the first pin.

Irate, Edwards chased Martini around ringside and into the ring. While there Martini accidentally clobbered his charge with his Book of Truth, and after Edwards took the manager out with a super kick he evened the score when he took Strong out with a fisherman’s buster.

After all of this time was against them, the limit expiring with the scores even. As the crowd called for five more minutes Jim Cornette came down to the ring, and after asking both men if they wanted to continue he announced that the match would go, not for five more minutes but until there was a winner.

Then, like two prize fighters slugging it out in a far away land Strong and Edwards began to duke it out in what was the most enthralling part of the match. It was an hard hitting back and forth segment with both men pulling out the big moves, unable to put the other away.

Eventually, we saw a winner. After Edwards took Strong down with a power bomb/sit down power bomb combo he took him down with his die hard driver for the three count, ending this awesome spectacle, with Edwards getting a standing ovation from the faithful afterwards, and rightfully so.

The main event, Ladder Wars III, saw Jay and Mark Briscoe taking on the All Night Express, Rhett Titus and Kenny King, with a contract for a Tag title shot up for grabs.

This is probably the most brutal match I’ve seen this year. For over thirty minutes these two teams beat the proverbial you know what out of each other. This wasn’t a wrestling match, this was a war.

The blood began to flow early on as they tore strips off each other, slamming each other on ladders, putting each other through tables and brawling all around ringside.

It was compelling to watch, but a little disturbing at the same time, especially the close up shot that showed the blood gushing out of Mark Briscoe’s head as he choked King.

The highlight of the match came when the brothers pulled out a massive ladder from under the ring, positioning it at ringside so they could dive off the top and put Titus through a table, the sort of move that a certain J.N. Hardy would have been proud of.

The end came when the massive ladder was taken into the ring and King fought off Jay’s challenge to take the contract hanging above them and earning a shot at the Tag titles.

Afterwards, as King kneeled in the ring he signed the contract in blood, putting the letters ANX onto the paper.

No extras on this one, so let’s move straight on.

In conclusion -  Ring of Honor have done it again. Despite the lack of big title matches, and despite the fact that their biggest star and World Champion was in Japan they still put together a quality show filled with great matches and packed with top notch action.

All seven matches delivered as the action was built up nicely to the final two matches, and these two matches just showed how different ROH can be at times, with Eddie Edwards and Roderick Strong delivering a technical wrestling mate class before the Briscoes and the All Night Express gave us a brutal brawl.

So in all, and this will come as no big surprise to you, Death Before Dishonor IX gets the thumbs up. If you missed the internet pay per view a couple of months ago then you really need to go and buy this DVD.

With thanks to the powers that be for supplying a copy of this release. ROH Death Before Dishonor IX is available to buy online at www.rohwrestling.com.