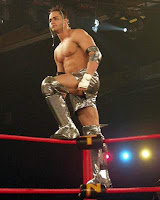 The chances are that if you’re reading this you’ve probably heard of Teddy Hart. He’s a third generation wrestler, grandson of the legendary Stu Hart. He was the youngest wrestler ever to be signed by WWE. He’s gone on to have a lengthy career around the world.
He’s also known as a career bridge burner. During a recent stint for AAA in Mexico it’s rumoured that he turned the entire locker room against him by changing match endings and spots to make himself look good. It’s a story that’s played out time and time again over the past few years.

News has it that he was recently in a rehab facility in Texas after being persuaded to go there by his uncle Bret, and that Bret was trying to convince WWE to give him one more chance.

A recent interview conducted with Live Audio Wrestling showed that Teddy has either been smoking too much of the wacky weed or has gone bats**t crazy.

In a brief outline of the interview published on the UK Fan Forum, Hart outlined his plans for his new wrestling promotion, Next Generation Stampede Wrestling, which debuts on September 19th.

Some of the gimmicks he wants to use are just insane. I’ll let the man himself explain his ideas:

“We have trampolines and we have skateboarders, we have all sorts of things that we want to do. I really like the X-Games, and I'm trying to get guys that are in the X-Games to transfer over into this new sport of wrestling that I'm creating. Certain things to look for in the future - you might end up getting a key instead of winning a fall, because all the falls are 2 out of 3 falls, we'll be wrestling a Mexican Lucha Libre style on that. Instead of winning a belt or something, you might win a key which will unlock a certain weapon that you can use, which may be like a skateboard, or a trampoline, or a special pair of boots that have magnets on the bottom so you can do some things that have never been possible before. Also, the turnbuckles are robotic for the new ring that we're designing. This may be six months away, but guys can adjust the height while they're up there."

"I'd like to see mechanically altered weapons and things like that. Chairs that change sizes, ladders that get longer, so you can be on a ladder and press a button and it gives you another three feet or five feet if you want to go higher. Higher is ratings. If you can have the fans all typing into their phone, and you want to see Ted Hart go an extra five feet in their air, everyone's got 30 seconds to type a code into their phone. If the code is in, and I get my combination from the referee, I climb up another five feet."

In case you’re thinking I’ve altered any of this, I swear on my mother’s ashes that I haven’t. Not one word has been changed in any way. Young Mr. Hart wants transforming weapons and boots with magnets on them. He wants extendable ladders, and he wants fans to text him to tell him to fly higher.

Hang on a minute though, there’s more:

"I'm training cats to come out to the ring with me, and I'm also trying to train animals to get involved in matches. I'm trying to get safety animals, like a dog, to basically pull the referee's leg before the count of three, little things like that. Or my dog will be carrying a weapon for me, and I would get it off his neck. Potentially if I had a female manager, and she has a cat, and the cat is maybe a good way of getting couple kids out of the audience, and I lure the kids out of the audience and the kids cause a disqualification to happen so I don't have to lose the belt, or something like that."

Once again I must state that not one word has been altered here, and that everything you’ve just read is true. Whether he’s talking about big cats or domestic pussy cats I don’t know, but the sight of Teddy walking to the ring with a ginger tom under his arm is even crazier than his weapons ideas.

As for using dogs in matches, does anyone remember the infamous Kennel from Hell match between Al Snow and the Big Boss Man? Dogs were involved in that one, and they seemed to spend most of the time either taking a dump in the corner or having sex with each other.

In short, I think Teddy Hart has really lost the plot with this one. His ideas remind me of a cross between the disastrous Celebrity Wrestling we Brits had to put up with and a poor man’s Gladiators.

Teddy Hart has already done a great deal to harm the proud Hart family name, and if he went ahead with any of his plans he’d become an even bigger laughing stock than he already is.
at September 14, 2011