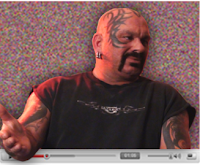 For years now there’s been rumours about Perry Saturn, rumours about his death, rumours that he was in hiding to avoid paying child support, and rumours that he’d simply fallen off the face of the Earth. But now he’s back and telling his story to Sean Oliver in the latest of Kayfabe Commentaries’ YouShoot series.
From the off the interview begins with what has happened to Saturn over the past few years, and while watching this he immediately earned my respect for the way he talked about his battles with his personal demons and with drugs. Saturn doesn’t shirk any of the questions that are asked of him, and one can only give kudos to the man for his openness.

But while a great deal of time is taken up with his personal life there’s also a lot of discussion about his time in the wrestling business. From the infamous match where he stiffed Mike Bell, something which he’s particularly ashamed off, his time as one half of the Eliminators with John Kronus, as a member of the Raven’s Flock and of the Radicalz, it’s all here. Saturn answers all the questions honestly and openly, and his stories make for great viewing.

It’s also refreshing to see one of these kind of interviews where the subject doesn’t spend a great amount of time badmouthing everyone he’s come into contact with. He even has nice words to say about the likes of Kevin Dunn and Vince Russo. In fact he only really criticises four people, Matt Hardy and Lita, because they weren’t happy with Dean Malenko laying out a match they were all involved in, and Mike Graham and Kevin Sullivan, two of the men who made big contributions to his decision to jump ship from WCW to WWE.

This has to be one of the most enjoyable YouShoots I’ve seen, rivalling those of Jim Cornette. As an interview subject Saturn comes across very well, and as a long-time fan of his work it’s great to see that he’s won his personal battles, so who knows, maybe we’ll see him back in the ring sometime soon.

So in all, YouShoot with Perry Saturn gets the big thumbs up, and comes highly recommended.

With thanks to the powers that be for supplying a copy of this release. YouShoot with Perry Saturn is available to buy online at www.kayfabecommentaries.com.