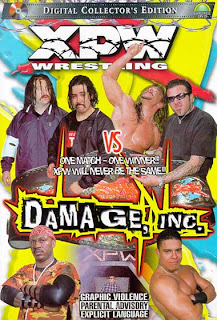 It’s time to step out of my comfort zone once again, and this time we’re stepping into Rob Black’s world as we go back to August 2001 and Xtreme Pro Wrestling’s Damage Inc, featuring a single elimination tournament to crown the first XPW TV Champion.

After a rather freaky looking segment which covered for the departure of World Champion the Messiah it was on to the quarter finals of the TV title tournament, beginning with Kid Kaos taking on the entire Enterprise stable of Steve Rizzono, T.J. Rush and G.Q. Money in a gauntlet match.

After a long pre-match promo from the Enterprise and a 3-on-1 brawl it soon settled down to Kaos against Rush, and it wasn’t long before Kaos got the pin after the sliced bread move.

Money came in next, and although he lasted a little longer he suffered the same fate as Rush, with Kaos taking him out with a TKO.

This left Kaos against Rizzono. Lots of stalling at the beginning of this segment before the action began, and in truth Rizzono looked pretty poor to begin with. It was after sending Rizzono crashing head first into an oil barrel that Kaos got the pin with a roll-up and bridge. First two segments good, third segment not so.

Kronus began by taking D down with some nice looking power moves before it degenerated into a long brawl around ringside which just seemed to drag on and on without going anywhere.

It quickly ended after they got back in the ring. Kronus missed a shoulder charge in the corner and D got the submission win with a Fujiwara arm  bar. Good start, poor middle, hurried finish.

This was little more than a squash match. Leroy spent a lot of time doing RVD impressions, and his only offence of note came in the form of weapons shots. It ended soon afterwards with Grimes getting the pin after his victimizer finisher.

No wild brawling here. Konnan and Webb began by exchanging several submission holds, and even though the XPW faithful weren’t too pleased it was fund to watch as Konnan secured the submission win with the tequila sunrise.

Then it was on to the semi-finals, beginning with Dynamite D against Kid Kaos.

Now this was more like it, a highly entertaining back and forth encounter between two evenly matched wrestlers.

Both Kaos and D put in great performances, and although the brief ringside brawl detracted from the action a little thankfully the in-ring activities made up for that.

Kaos pinned his fourth man of the nigh here, countering D’s hurricanrana attempt with a pile driver. Great stuff.

This was the complete opposite of the first semi. Grimes pulled off some good power moves in the ring before it turned into a brawl at ringside with plenty of weapons shots from both men.

But when Grimes failed to put his man through a table, going through it himself when Konnan rolled out of the way, it was only a matter of time before Konnan took another submission with the tequila sunrise.

But that wasn’t the end of the action as the Black Army came down to the ring and attacked Konnan, with Halloween, Damien 666, Psicosis and Lady Victoria making the save.

New Jack against Homeless Jimmy was next, with the winner getting a shot at the TV title.

This was one big weapons filled brawl. Jack beat the hell out of Jimmy, and it looked like he was going to get the pin after clobbering him with a big sign from the top rope.

But as Jack made the pin the referee stopped his count and changed the rules, turning the match into a Royal Rumble.

This brought the likes of Pogo the Clown, Damien 666, Nosawa and Halloween to the ring.

It was then that the match just seemed to drag on and on as everyone involved pulled off all their big moves before, Jack and Jimmy were left in the ring as the final two. Moments later Jack back dropped Jimmy over the top rope and through a table to win the match and the title shot.

The TV title tournament final followed as Konnan, accompanied by Psicosis, faced Kid Kaos, accompanied by his uncle Supreme, who had previously been injured by the Enterprise.

As with his quarter final match Konnan began with a series of submission attempts, and even though there were a couple of dodgy moments the match progressed nicely, with some great back and forth action until Kaos reversed Konnan’s roll up for the title winning pin.

Then came the turn. After the Enterprise came down to the ring Kaos clobbered Supreme with his new title belt. He then poured lighter fluid over his uncle, intent on setting him on fire until security charged the ring and broke up the attack.

Then it was on to the main event. Now without a partner, Rob Black announced that he would be facing Sabu and his manager Josh Lazie in a handicap match.

There were some stipulations for this one. Black announced that he would be defending the now vacant World title, as well as defending his position as XPW’s CEO. If Sabu and Lazie won, then Sabu would be champion while Lazie would be CEO.

It was then that Lazie, with a few choice words, announced that he was going after Black.

They soon found him, dragging him back to the ring. The only thing was that he’d found a new burst of energy and some new wrestling skills. It was only after New Jack arrived on the scene that the ruse was revealed when he threw the real Rob Black back into the arena. The impostor was actually Johnny Webb.

The tide turned when Damien Steele came out to lend a hand, with Webb pinning Lazie after putting him through a table, not only winning the match but the vacant World title in the process.

In conclusion - well, my first full XPW show certainly threw up a mixed bag of goodies.

While there were some great matches here, particularly those involving Kaos against Konnan and Dynamite D, there was also quite a bit of stuff that left a lot to be desired, especially the main event and the opening segment, which looked like it was plucked right from one of Rob Black’s adult movies.

So in all XPW’s Damage Inc show gets the thumbs up for some things, but the big thumbs down for the others, which makes me realise that I must have been spoiled after watching that After The Fall 1 DVD a while back. Looks like that really was a best of compilation.
Posted by Julian Radbourne at 14:20:00