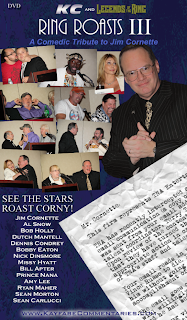 If there’s one thing I look forward to every so often it’s getting the latest release from Sean Oliver and Kayfabe Commentaries shoved through my letterbox. By now you probably know that I’m a big fan of what they do, and when I heard that this year’s Ring Roast would be dedicated to Jim Cornette I couldn’t wait.


With Bill Apter acting as master of ceremonies, the great and the good of professional wrestling turned up to honour the man, including the likes of Missy Hyatt, Amy Lee, Nick Dinsmore, Al Snow, Bob Holly, Dennis Condrey, Bobby Eaton, Prince Nana and Dutch Mantell. The world of stand-up comedy was also represented, in the form of Ryan Maher, Sean Morton and Sean Carlucci.

So it was in the early hours of Christmas Day I put the DVD into my DVD machine and settled down on my bed for what I hoped would be a laugh fest full of jokes so crude and controversial that Frankie Boyle’s most recent efforts would seem like schoolboy stuff.

But sadly Ring Roasts III is a bit of a hit and miss affair. There were the proverbial laugh out load moments, especially from the star of last year’s show, Missy Hyatt. Once again the woman was comedy gold,

But there were also those who, quite frankly, died on their arses. A lot of Al Snow’s jokes drew zero heat, while all of Sean Carlucci’s routine drew complete silence. Amy Lee just resorted to swearing at the audience. Completely drunk after a few Jack Daniels, she reminded me of the kind of woman I used to see in Norwich’s nightclub district.

As for the honoured guest, Mr. Cornette was his usual self, cutting the best promo of the lot. The man is still one of the best in business.

But at 3am in the morning, and after about 140 minutes, I couldn’t help but feel a little disappointed. Whether it’s because I was spoiled by some of the Comedy Central roasts that Channel 4 broadcast here in Britain a few months ago or because my sleeping pills were finally kicking in, but Ring Roasts III just didn’t deliver.

So if you’ve got a bit of cash to spare over the festive period and want something to buy, then this may not be the DVD for you. It’s good in parts, but overall it doesn’t get the full thumbs up.

With thanks to Kayfabe Commentaries for supplying a copy of this release. Ring Roasts III: Jim Cornette can be purchased online at www.kayfabecommentaries.com.
Posted by Julian Radbourne at 22:43:00