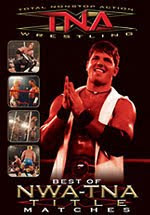 This edition of The Two Sheds Review sees us taking a trip back in time to the early days of Total Non-Stop Action to look at some of their early NWA title matches in “The Best of NWA-TNA Title Matches”. Our hosts for this collection are TNA regulars Mike Tenay and Don West.