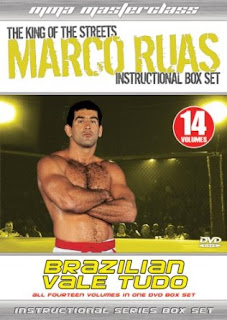 When the bods at MMA Universe asked me to review another instructional DVD, I have to admit that I was somewhat reticent about their request. After all, I’m never likely to become a fighter in any kind of sport, so why should I review these kind of DVDs? So it was with these thoughts going through my mind that I began to watch a fighting legend in action in Marco Ruas - Brazilian Vale Tudo.

For those of you who don’t know, Marco Ruas is a legend in the mixed martial arts world, the winner of the UFC 7 tournament and a Pride veteran, he’s a legend in the world of Brazilian Vale Tudo, probably the most dominant fighter to have ever competed in that particular discipline.

In this three disc set, Ruas takes you through the various techniques he’s devised and employed during his career. Everything is here, from striking techniques, to take downs, submission holds and much more. After taking you through the basics, Ruas demonstrates more advanced techniques. There’s also a section on self defence, which I found very interesting, and helpful as well, should the thugs I live next door to decide to try it on while I’m walking down the street.

Although this was originally filmed over a decade ago, Ruas’ techniques are very relevant to the MMA world of today, and many fighters trying to break into the sport would do well to get a copy of this set so they can learn from one of the greatest fighters the world has ever seen. This set comes highly recommended, and if a confirmed couch potato like me can get something out of this, then I’m sure that up-and-coming fighters will learn a thing or three as well.

With thanks to MMA Universe for supplying a copy of this DVD release. Marco Ruas: Brazilian Vale Tudo is available to buy at www.mmauniverse.com.
Posted by Julian Radbourne at 02:54:00