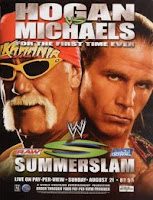 It’s that time of year again, when the WWE (apparently) pulls out all the stops and brings us the second biggest show of the year, Summerslam, this year coming from the MCI Centre in Washington.


The show begins with Lillian Garcia singing the American national anthem. Doesn’t mean much to me as a Brit I’m afraid.

We begin with Orlando Jordan defending the US title against Chris Benoit, and a match that lasts less than thirty seconds, as Benoit locks in the crossface for the quick victory. I’ve got mixed feelings about this match - it either makes Benoit look like a killer again, or it totally destroys Jordan’s character and title reign. The jury is still out on this one.

Mrs. Guerrero then confronts her old man backstage, showing only a little more acting ability than the late Al Wilson. Skit ends with the old man telling the missus where to go.

The so-called ultimate grudge match follows, as Matt Hardy tries to get some revenge against Edge. This had a kind of MMA feel to it. Very few actual wrestling holds here, apart from Hardy’s rear naked choke, and the end came a little too soon for many when the referee stopped the bout following Hardy’s head wound. Am I the only one who was disappointed with this?

Thankfully, things are turned up a notch with the ladder match, as Rey Mysterio and Eddie Guerrero fight for the custody of an eight year old boy. Tons of emotion, tons of drama, and run-ins from Dominic and Mrs. Guerrero made for a great match, with Latino Heat once again unable to defeat his nemesis, Mysterio grabbing the briefcase and winning custody of the boy. You can never speak too highly of a match like this.

A somewhat short match next, as Kurt Angle returns to his killer ways by defeating Eugene to win his gold medal back. Some may have written Angle’s career off, but this match shows that he’s still capable of putting on a damn good show, even if it does last less than five minutes. A shame that Eugene almost got booed out of the building though.

Next we see several of the divas washing the presidential limo, which contains a certain Vincent K. McMahon, with a “McMahon for President” sticker on the bumper. Would you Yanks really vote for this guy? Mind you, imagine the conversations he could have with Slick Willy.

Undertaker v Orton: the re-match follows, and another surprisingly good bout between the legend and legend killer, which sees Orton getting revenge after an RKO. I bet I wasn’t the only one who was fooled by the run-in from the fan, until it turned out to be Randy’s dad, and even though Orton now seems to be heading into a feud for the World title, I wouldn’t be surprised if we saw a third and deciding match between these two.

John Cena then defended his WWE title against Chris Jericho, in a match that the crowd, and this writer, were really into. Cena seems to have come on leaps and bounds since he defeated JBL for the title at Wrestlemania, and both he and Jericho should be commended for their efforts, it was a hell of a match. Lots of reversals and plot twists saw Cena pin Jericho after an FU. Damn good match here.

Then Batista defended his World title against JBL in a no holds barred match. It wasn’t difficult to beat their previous encounter at The Great American Bash. That match was dire, and while this one was a little better, it certainly won’t go down as a classic, and certainly wasn’t as good as Cena v Jericho. The hometown boy kept the title after scoring with a power bomb on the ring steps.

Legend v Icon time, as our main event features Hulk Hogan v Shawn Michaels. An impressive effort from both men, especially Michaels, who looked like the Heartbreak Kid of old, and who sold like a bitch, making everything that Hogan did looked good. Of course, there was only one outcome, as after twenty minutes of action, Hogan defeated Michaels with the leg drop of doom. Afterwards, Michaels and Hogan shook hands, with Michaels saying that he just had to know.

In conclusion - for the second biggest show on the WWE calendar, the 2005 version of Summerslam just about delivered. Hogan v Michaels was a worthy main event, but for me, it was just shaded by Cena v Jericho for the WWE title. My only disappointment was, once again, the lack of any tag-team title defence on a main show, and once again it just shows how the creative team views the two tag-team divisions at the moment.
at August 21, 2005