It's The Twentieth Anniversary, But I Don't Feel Like Celebrating #Coronavirus #SpeakingOut 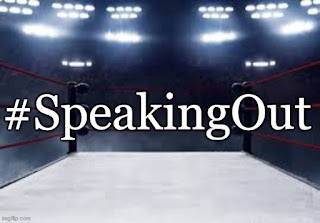 On June 19th 2000 The Two Sheds Review debuted online. This year marked it’s twentieth anniversary, but at the moment I really don’t feel like celebrating.

I could go on about everything I did from that day until I stopped reviewing wrestling shows a few years ago. There’s a lot I could mention, but going on about past achievements in this day and age just doesn’t seem right, especially with everything that’s gone on in the past few days.

#SpeakingOut hasn’t brought the professional wrestling business to it’s knees, but it’s certainly left it with life-changing injuries from which it may never recover. Men and women have spoken about being sexually, physically and emotionally abused by those in the business. Names are being thrown about left right and centre, and some of those volleys have been lobbied to some of those I used to work with, people that I myself have spoken out about in the past.

Promotions have shut down, people have either resigned or been fired, social media accounts have been deleted, some are threatening legal action, and some of the accused are even selling T-shirts in an attempt to drum up support for their cause.

Companies and performers that you have entertained you for years are now being forced onto the back foot, vigorously defending themselves. Some of them have been apologetic, genuinely remorseful with regards to their actions. Their actions may have been reprehensible but they’ve put themselves across quite well. This isn’t the case with others though. Rather than offer apologies and support for the victims they’ve gone into overdrive, posting statements and videos in which they rant and rave, threatening both violence and legal action against the accusers.

It certainly leaves you with an awful taste in your mouth. You’re either shocked by what you’ve heard or it’s just confirmation of some of the Chinese whispers you’ve heard over the years. But no matter what you’ve heard you have to realise that the men and women who have spoken out about their experiences are incredibly brave people.

Then there’s the threat from the coronavirus pandemic, a threat that may be decreasing in some aspects it’s still an ever-present one, and one that isn’t going to go away for a long time. That much is obvious when you hear about the rise in the number of cases in some parts of the world after the easing of lockdown restrictions.

What’s happened at the WWE Performance Centre in Florida is a perfect example of this. While other sports and branches of the entertainment industry shut themselves down WWE continued to produce and broadcast new shows each week. Some performers, most notably Roman Reigns, chose not to take part.

With everything’s that’s been going was it really surprising to hear that some of those working there tested positive for the virus? Or that one of their interviewers has now come down with the virus twice? It’s a situation that has come back to bite the company on it’s backside, and given the quarantine and travel restrictions that some American states have introduced in the past few days it’s another blow WWE, and the wrestling business in general, will have to roll with.

The wrestling business has taken a hell of a lot of hits over the years. It’s been hit right to it’s core by scandal after scandal. But it’s never seen anything like the dual attack from the coronavirus and the #SpeakingOut movement before. Can it make a full recovery? Only time will tell.