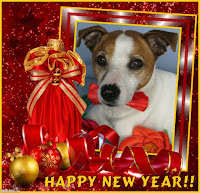 So as I approached my final day of work for this year I began to realise something. Some of you will probably say it’s nothing special, but for yours truly it’s kind of a mini-mega event-type of thing.

You see, 2017 is actually the first full calendar year I’ve worked since 2001. Yep, that’s right. It’s been a whole 16 years since I’ve worked from January to December. You’re probably thinking that there’s nothing special about that, but to me it finally feels like I’ve turned the proverbial corner, because after years of illness, injury, bit-part jobs and a bout of almost terminal unemployment I finally feel like I’ve accomplished something.

I finally feel like I’m back in the game as it were. I’m working with a great bunch of people, and it feels good to have a reason to get up in the morning. It also feels good to be able to make plans for the future. Okay, planning a trip to the world’s biggest dog show may not seem like a big deal, but to me it’s a start.

So without naming names I would like to say a big thank you to everyone who has supported me over the past few years. I really couldn’t have done it without you all.