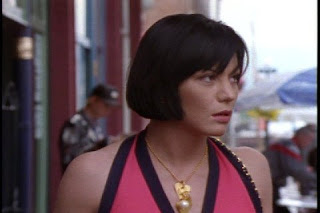 Even though she knew she would be outmatched Felicia Martins prepared herself for battle against Red Sun and Supercop. With her sword in her hand she began to swing around, first facing Red Sun and then facing the American.
“Nothing you do will stop me.” she said.
And with that she lunged at Supercop, who easily got out of the way. Next she tried to take a swipe at Red Sun, and again missed.
“You don’t seem to be doing much!” said Red Sun.
This remark angered Felicia, and with her sword she made another lunge. Red Sun again got out of the way. This time however she fired a nova blast which struck the sword. The heat from the blast melted it slightly. Seeing this, Felicia connected with a kick to Red Sun’s mid-section, knocking the wind out of her. She then spun round and was about to attack Supercop when the American grabbed her wrist. Felicia tried to use the tactic on Supercop that she had tried on Red Sun, but this time it did not work. Even though she was immortal she knew she was outmatched.

The dust began to settle on the surface as countless android bodies lay on the surface, utterly defeated. Nearby were the unconscious forms of Klepto and his fellow dwarves Boogi and Leer. The wolves Gore, Gastro and Frantic had earlier fled. Nasher and Nidhog had returned underground. The only ones that were left standing were Magus, Khan, Star Man, Nuclear Man, Fire-Master, Rhiannon and Cosmic Kid. Magus looked over at Rhiannon. A few seconds later he approached her.
“It’s been a long time since we last saw each other.” he said. “What are you doing here on Mars?”
It was from my computers that Darkmagus got his information.” Rhiannon replied. “I traced the signal here where I was captured. I’ve only just escaped. Cosmic Kid helped me.”
As Magus spoke to Rhiannon he did not notice Anthog trying to attack him from behind. Only a fire burst from Fire-Master prevented this attack. Magus then cast a spell which rendered the Balrog unconscious.
“So what do we do now?” asked Star Man.
“We enter the base and look for my brother.” Magus replied. “And pray that we don’t meet any resistance.”

Felicia Martins was really up against it. She was indeed no match for both Supercop and Red Sun.
“Why don’t you give up?” asked Supercop.
“Because I have one more ace up my sleeve!”
Quickly she reached into her pocket and took out a small device. She then hurled it onto the ground where it exploded, sending a bright light shining out. The light blinded both Red Sun and Supercop, but not Felicia. She used the diversion to make her escape, and a few minutes later she was in the hangar boarding a small shuttle-craft. It was soon making it’s way to Earth.

Slowly Watt, Mighty Man and Red Star moved through the dark corridors. Red Star was using his powers to light the passages. So far they had not met any resistance.
“I don’t like it.” said Mighty Man. “It’s too quiet. We should have encountered something by now!”
The American spoke too soon. Suddenly the main lights came on and they were surrounded by twenty of Darkmagus’ androids.
“Here we go again!” said Watt.

The clear up operation began at the Royal Palace. The emergency services began to arrive. The concerned changed from those possibly injured to the damage done to the priceless artefacts inside.
“I am sure there has been much damage.” said Tiger. “But at least there has been no loss of life.”
“But what about the priceless paintings inside and all the jewellery?” asked Tigress. “Most of it is worth millions! It may be lost forever!”
Suddenly they heard a sound above them. The three of them looked up to see a helicopter flying overhead. Suddenly what appeared to be over twenty men jumped out. Their faces were soon visible. They were not men, they were the androids of Darkmagus. Another battle had begun.

Magus and his group were now further into Darkmagus’ base. Fire-Master continued to light the way using his powers. Then Star Man spotted something in the distance.
“Look!” he said, pointing. “Looks like someone’s up ahead!”
Star Man rushed off ahead. Magus tried to stop him.
“Wait! It might be a trap!”
Star Man did not listen. He was soon near the two bodies.
“It’s Red Sun and Supercop!”
He was soon joined by the others. Magus was concerned. Red Sun and Supercop were still partially blinded by Felicia Martin’s flare bomb.
“Are you okay?” Magus asked.
“We were caught off guard by that Martins woman.” said Red Sun.
“Where is James?” asked Magus.
“I don’t know. We were taken away by these sentinel robots.” replied Supercop.
“I hope they are alright.” said Khan.
“I do too.” added Magus.

Watt, Mighty Man and Red Sun stood breathing heavily as they looked around at all the android bodies on the floor. It had taken quite a bit of effort but they had managed to defeat them. They were, however, now very tired. Mighty Man wiped the sweat from his brow.
“I hope we don’t have much more of this.” he said.
“I have a feeling there will be a hell of a lot more!” replied Watt.
And with that they continued on their way into the base.

The ground began to shake as the battle between Lug and the Dagda continued. It seemed they were just continuing where they had left off before. Blow was matched by mighty blow. The Dagda hit Lug with his huge club, while Lug used his spear on his immortal enemy.
“There is no point in fighting me.” said the Dagda. “The forces of Darkmagus will prevail!”
“Never!”
It seemed that the Dagda had made a mistake by taking to his foe. Lug reared back and unleashed a mighty blow upon the Dagda. The blubbery one soon got to his feet but he was soon knocked off them by another mighty Lug blow. They continued to battle for a number of minutes until a glow appeared near them. When the glow subsided the wizard Ringulrun could be seen. This annoyed the Dagda.
“Not again Istarian!” he boomed. “You will not get me again!”
The Dagda then took a small device in his hands and operated it. Seconds later he was gone.
“Where did he go?” asked Lug.
“I do not know.” said Ringulrun. “This was not my doing.”
“I swear by all the gods that I will have my revenge on you!” Lug cried.

Magus’ group, which now contained Red Sun and Supercop, continued on their way through the building. Magus was getting a feeling of deja-vu.
“This part of the building seems very familiar.” he said. “It is almost exactly like the building on the shore of Loch Ness.”
Magus suddenly stopped when he saw something down the wall - a door.
“We’ll check in there!” he said.
Magus then cast a spell to unlock the door. He was the first one to step into the room. He felt around for the light switch and soon found it. What he saw surprised him.
“It can’t be!”
“It is identical to the room at the Loch Ness building.” said Khan.
The genie then walked over to one of the instruments. The others began to look around at the containment pods that were all over the room. Each of them looked into the pods and saw what appeared to be human faces.
“Are they alive?” asked Red Sun.
`    “No.” said Magus. “They are just androids, probably waiting for Darkmagus to activate them.”
“There must be close to ten thousand of them here.” said Star Man.
“We must destroy them.” said Cosmic Kid. “Before they can be activated.”
“I agree.” said Magus.
Magus turned to Nuclear Man.
“Would it be possible for you to use your powers to alter their atomic structure?”
“Into what?”
“I don’t know.” Magus replied.
“Will flowers do?”
Magus smiled and placed his hand on Nuclear Man’s shoulders.
“Flowers will be perfect!”
“It may take some time.” said Nuclear Man.
“Take all the time you need.” said Magus.
“Then everyone, please stand back!”
The rest of them took cover outside the room. As they did Rhiannon turned to Magus.
“Together we could have destroyed them.” she said. “Why did you ask this mortal to perform this task?”
“Because I believe we will need our powers soon.” Magus replied.

The battle raged outside what was left of the Royal Palace as Tiger, Tigress and the Lion used their agility to escape the countless number of androids. At the same time they also used their razor-sharp claws to carve their way through the enemy.
“We appear to be winning!” said Lion.
The African had spoken too soon. Just as they finished carving their way through the androids another group appeared in the sky and soon joined the battle.