The Dawning of the New Age - Chapter Six 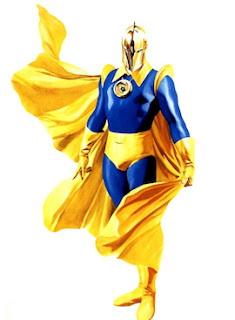 A day later and the lone woman motor cycle rider was in Germany. She rode along at speeds of sixty miles an hour-plus until she came to a road sing. She stopped and read it. In German it said ‘Berlin, two miles’. Seeing this she took off her helmet and looked upwards towards the sky. It appeared that she was on time because in the sky she saw a read a yellow streak, the sign that Fire-Flash was coming. The German soon landed near her. He then flamed-off.

“Are you Miss Martins?” he asked.
“Yes.” she said. “Where is Darkmagus?”
Suddenly there was a hand on her shoulder. Martins turned around to see that tall figure of Darkmagus standing behind her.
“I have my own ways of travelling Felicia.” he smiled. “Now tell me, did you complete your task?”
“Their truck was disabled, if that’s what you mean. But you should know that they’ll come here looking for us.”
“That I am planning on.” said Darkmagus. “Now, you each have your orders. Fire-Flash, you will leave now and carry out your orders.”
Fire-Flash stared at Darkmagus.
“What are you looking at German?” Darkmagus snapped. “You have your orders, carry them out or you will be punished!”
And with that Fire-Flash ignited his fire and took to the skies. Martins got off the motor cycle and turned to Darkmagus.
“Damian, are you sure this is wise?” she asked. “After all it was in Berlin you found Detlev. He could turn.”
“There is no need for you to worry your pretty little head over this.” said Darkmagus.

A short time later four men teleported into an empty alleyway in Berlin, three of them dressed in German army uniforms, with Magus dressed in the uniform of a Gestapo officer. Magus felt uneasy at not being dressed in his usual tailcoat.
“Oh well, I suppose these clothes will have to do.” he said. “Even if I am a little too short for a Gestapo officer!”
“So where do we go first?” asked Connor. “What do we do?”
“I suggest we go to the nearest café and wait.” said Magus. “I only hope your German is good enough!”
The four of them walked out of the alley and into the street. Most of the people did not seem happy. The war was going badly for them at the moment. Magus looked around at some of them, and using his telepathic powers probed some minds at the hope that someone had seen Fire-Flash. He had no luck. Then, down the street, they noticed a small crowd gathering, and that the crowd seemed to be looking up into the sky. They soon joined this gathering and saw a familiar sight in the sky, a red and yellow flash in the sky. Suddenly the familiar sight began to get lower and lower. The crowd began to scream as fireball after fireball was hurled at them and the surrounding buildings. The attack had begun.
“Looks like these uniforms won’t be needed after all!” said Magus, changing their attire to normal.
“It’s obvious now he’s not on either side.” said Fate.
After their clothes changed both McClouds drew their swords and were about to enter the building so they could join the battle from the roof. However, they were soon attacked by the masked Felicia Martins again, this time with karate kicks to the back. This time, however, she used the wrong strategy as the McClouds began to fight back. Martins found herself outmatched until a blast of mysterious energy hit them, stunning them both.
Meanwhile, Fate and Magus had taken to the skies in an attempt to stop Fire-Flash hurting innocent people. They had started to attack when Magus noticed the attack on Connor and Duncan. He looked down towards the ground and was surprised to see Darkmagus standing nearby. This distraction was all that Fire-Flash needed as he unleashed a massive fire burst at the wizard, sending Magus crashing to the ground. Then Fate countered with an attack of his own. This attack of mystical energy stunned the German, making him lose his flame and sending him falling to the ground near where Magus lay. Darkmagus watched as his lackey tried to get to his feet, only to collapse again a few seconds later. This annoyed Darkmagus, who then realised that he must destroy Berlin himself. Raising his hands he began to unleash massive bolts of mystical energy at the surrounding buildings. This massive attack sent rock and rubble flying everywhere. Some of the falling rubble struck innocent men and women, some of whom were already lying on the floor injured. As this happened Fire-Flash began to come round, and through a haze he saw someone he recognised, a woman, lying on the floor nearby. Darkmagus continued his attack, and another piece of huge rubble came falling down towards the woman. Fire-Flash barely had enough strength to raise his arm, but raise his arm he did, and he just had enough power to fire a burst of glam which knocked the piece of rubble out of the way so it did not hit the woman. He then began to crawl across the ground towards the woman. Darkmagus was furious. He was furious that his attack had been halted by his lackey.
“What the hell are you doing?” Darkmagus boomed. “Why did you do that?”
Fire-Flash was now next to the woman. Gently, he picked her up and held her in his arms. He looked up at Darkmagus with tears in his eyes.
“You bastard! You made me kill my wife!”
Using the last ounce of strength he had in his body Fire-Flash got to his feet and flamed on. He then raised his arms and began to unleash the full force of his power. Red hot flame began to engulf Darkmagus, and white hot light filled the surrounding area, forcing everyone to shield their eyes with heir hands. Darkmagus countered by using his powers to magically teleport himself and Martins away. When the light died down Fire-Flash no longer had the strength to stand. Connor McCloud rushed over to him. He was soon joined by Magus.
“He’s alive, but barely.” he said. “Where’s Darkmagus? Did Fire-Flash kill him?”
“He teleported away.” Magus replied. “I can’t tell where.”
Magus looked down at the fallen Fire-Flash.
“But without his help we may never have defeated him.”

A week later and a small funeral was taking place in Highgate Cemetery. Present were Dr. Magus, Connor McCloud, Duncan McCloud, Detlev Heiss and Darius, an immortal priest and old friend to Duncan McCloud. After the ceremony Darius and Duncan walked away, leaving the other three graveside.
“I’d like to thank you for this Darius.” said Duncan. “It meant a lot to me.”
“It is a pity Darkmagus was not capture.” Darius replied. “I fear that he will return someday to take the world for his own.”
“Of that I have no doubt.” said Duncan. “But there will be others, like us, who will oppose him.”
Sadly history would show that Darius would not be able to help in the battle against the evil of Darkmagus.