When Mr. Jolly Lived Next Door 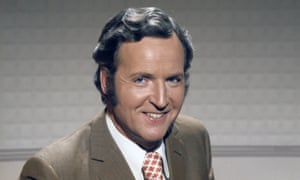 When people of a certain age think of Nicholas Parsons, they probably think of Sale of the Century. The phrase “live from Norwich, it’s the quiz of the week!” was made all the more special if you lived from Norwich, even though we found out years later that the show wasn’t actually live. Although to be honest with you the sight of Nicholas Parsons trying to convince people to buy mink coats, rickety-looking caravans and brown and beige family saloon cars for knockdown prices didn’t exactly appeal to me at the time.

Mr. Parsons’ appeal to me changed a great deal on the night of March 5th, 1988, when we found out that a certain Mr. Jolly lived next door.

If you’ve never seen The Comedy Strip Presents: Mr. Jolly Lives Next Door then you’re missing out on a classic. It’s rude, crude, and somewhat gruesome in parts, but it’s also one of the funniest things I’ve ever seen.

The basic premise of the story is this. Rik Mayall and Adrian Edmondson play unnamed characters who run an agency called Dreamytime Escorts. No, it’s not the kind of escort agency you’re thinking of. Basically they force themselves (no, not in that way) on unsuspecting overseas businessmen, forcing them to engage in massive drinking sessions, at the expense of the businessmen. 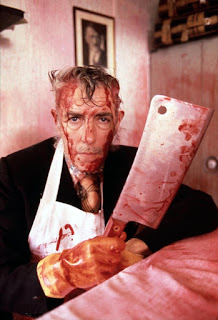 Next door to them lives Mr. Jolly, played brilliantly by Peter Cook. Mr. Jolly is apparently a cuddly toy salesmen who, at times, plays very loud music while borrowing copious amounts of our protagonist’s washing up liquid. However, Mr. Jolly is actually a hired killer who lures his victims to his office, and who uses the washing up liquid to wash the blood stains from his walls.

Both of them live above an off-licence, whose owner, Heimi Henderson, refuses to pay the low-life gangster Mr. Lovebucket protection money. He’s also hired Nicholas Parsons to open his new retail venture.

If you’ve never seen this show you’re probably wondering what the hell was going on, and why I described this as one of the funniest things I’ve ever seen. Well, read on.

Our protagonists inadvertently open a package sent to Mr. Jolly by Mr. Lovebucket. The package contains a large amount of money and a note saying to “take out Nicholas Parsons”. Our boys take this at face value. Later that evening they meet up with Mr. Parsons, who mistakes them for a pair of competition winners he was meant to be spending the evening with.

What follows is absolute comedy gold. What you’ve got here is Mayall and Edmondson playing their future Bottom characters but with the levels turned up to eleven and beyond, while Mr. Parsons spends most of his time looking absolutely horrified and disgusted with his companions. 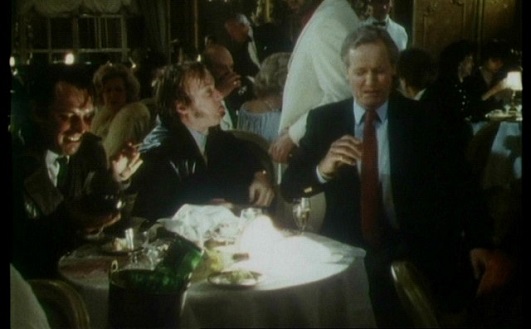 As I said before this is a comedy that is rude, crude, and quite disgusting at times, but it’s also something that has left me in fits of laughter over the past thirty years. Rik Mayall and Adrian Edmondson are in top form throughout here, while Peter Cook puts in one of his best performances ever as the unpleasant killer Mr. Jolly. That moment when Mr. Parsons knocks on his door is classic. It’s brief, but it’s also one of the best comedy exchanges I’ve ever seen.

But in all of this the biggest kudos of all have to go to Nicholas Parsons himself. The fact that he was more than willing to send himself up this way was a credit to the man, and I still wonder to this day how the Comic Strip writers and producers pitched this show to him.

Mr. Jolly Lives Next Door is a classic, and it still stands up incredibly well just over thirty years later. It’s also a fine example of how one of the most beloved broadcasters on British television was more than willing to have a laugh and joke at his own expense.