This Really Wouldn't Have Worked 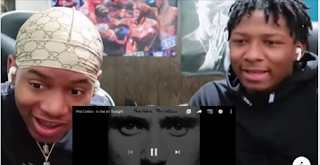 Back in the deep, dark days of the lockdown when countless ideas were going through my head about what I could do to pass the time I considered jumping on a bandwagon that’s been getting a lot of mileage in recent times.

If you look on Youtube these days you’ll see countless videos of young people “discovering” songs. These peeps are often quite young, probably born after the year 2000, and they film themselves listening and reacting to classic rock songs. The first one I saw featured a young girl listening to Deep Purple’s “Child In Time”, and most recently a video of two young lads listening to Phil Collins’ “In The Air Tonight” went viral on social media.

My idea was to do the complete opposite of these youngsters. I’m a middle-aged man, and it’s no secret I pay very little attention to what’s going on in the music world these days, unless it’s one of my favourite bands from the seventies or eighties releasing a new album.

So my idea was to film myself “discovering” the hits of modern-day artists such as Ed Sheeran or Taylor Swift. I would have filmed myself listening and reacting to a modern song, and when the song ended I would have given a short review.

If I did that though then every video would have the same ending. It would feature me taking my headphones off and saying “well that was a load of crap, wasn’t it?”

I know this will make me sound old but I’d rather listen to a classic album from decades ago than anything that gets into the charts these days. Some of you youngsters may scoff at this, but I’m happy in my little music bubble.

So you youngsters stay in your little bubbles with your catchy tunes. I’ll be sitting over here nodding my head up and down to the likes of James Brown and Isaac Hayes.