Announcing The Two Sheds Review Hall of Fame Class of 2016

The 16th anniversary of The Two Sheds Review also means that it’s time to turn our attention once more to my Hall of Fame, and just like last year this year’s induction has a theme.

You see, when I was looking over my past inductees I immediately saw that something was missing. I’ve always been a big fan of tag team wrestling, but I’ve never actually inducted a tag team, So let’s rectify this by inducting six teams that have given me countless hours of entertainment over the years. This year’s class, in alphabetical order, are: 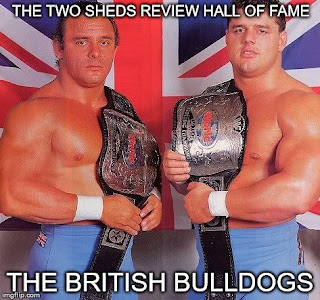 THE BRITISH BULLDOGS
I’ve always made an effort to induct a Brit or two, and as I inducted both Davey Boy Smith and the Dynamite Kid a few years ago as singles wrestlers it just seemed right to induct them as a team. 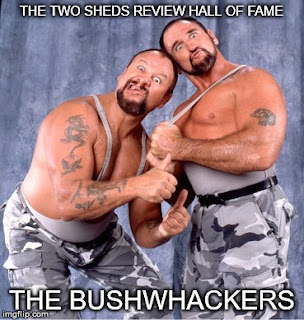 THE BUSHWHACKERS
Luke and Butch were one of the first teams I took a real liking to when I first got into the WWF back in 1989. They may not have been the biggest, and they certainly weren’t the most gifted technically, but their whole comedy routine often had the 17 year old me in stitches.

I wasn’t the only one. In fact they had a similar effect on some of those in the British wrestling business. One of the favourite stories I heard came from when the Bushwhackers used to tour the UK after their WWF run. One wrestler, who I got to know quite well, upon finishing his match then joined a line of fans waiting to get Luke and Butch’s autograph at their gimmicks table.
The ironic thing about that is that a few years later his girlfriend told me to stop being a punter! 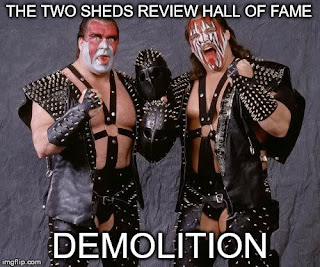 DEMOLITION
Back in 1989 the team of Ax and Smash were one of the first teams to really grab my intention, which wasn’t surprising considering all those studs and that face-paint.

You could argue that Demolition is also the most aptly named tag team in wrestling history. They didn’t wear their opponents down with fast-paced attacks or technical wizardry, they just beat the hell out of them with their power-based game. In essence, they demolished them.

Which leads me to another interesting story from my time in the British wrestling business. I was watching an old episode of Wrestling Challenge with two well-known British stars who will remain nameless, and they both commented on how bad Ax and Smash were because they didn’t actually wrestle their jobber opponents, all they did was beat them down.

I tried to explain that was because that was their gimmick, that they demolished people. These two were having none of it though, which just goes to show that even guys with a combined total of over 40 years in the business just don’t get things sometimes, although I bet they’d be more than willing to fly Ax and Smash over for their shows if they could get them at a good price.

For me the team went downhill a little when Crush was added to the group. I won’t go into the reasons why he was added, but it just didn’t seem the same, which is why Ax and Smash, and not Crush, are inducted here. 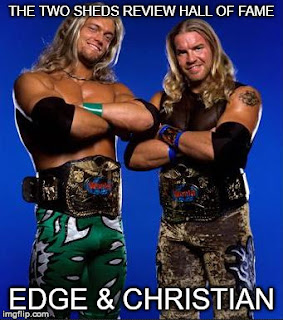 EDGE & CHRISTIAN
While trying to decide who should go into my Hall of Fame this year I knew that I had to include a team from the Attitude era, that I couldn’t just include teams from the time when I first got into the American wrestling scene.

So I decided to induct a team that didn’t just entertain me in the ring but outside the ring as well, which is why I picked Edge and Christian.

Of course, these two are both former World and Intercontinental Champions, but it was as a tag team that they really captured the attention of fans worldwide. Their TLC matches with the Dudleys and the Hardys are now the stuff of legend.

Their promos and interviews are just as legendary though, They may have captured countless tag team titles during their run together, but they also introduced an era of awesomeness to WWE, giving us many fine moments, especially for those with the benefit of flash photography. 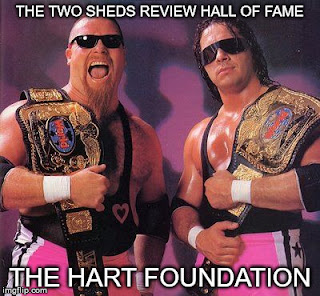 THE HART FOUNDATION
When I think of my all-time favourite tag teams there was no way I couldn’t include the original Hart Foundation.

You could argue that Bret “Hitman” Hart and Jim “The Anvil” Neidhart were the perfect combination. With the Hitman providing the technical expertise and the Anvil providing the power, these two could have classic matches with everyone they stepped into the ring with.

Their rivalry with the British Bulldogs remains legendary today, and their match with the Brain Busters team of Arn Anderson and Tully Blanchard at Summerslam in 1989 is still one of my all-time favourites.

Of course, the Hitman was also inducted into my Hall of Fame as a singles wrestlers a few years ago, and I ranked him as my number one wrestler of all time back in 2011, so there was no reason not to induct him again. 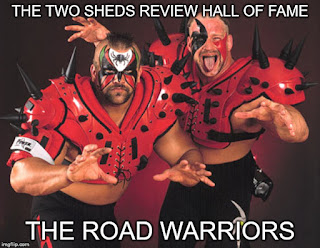 THE ROAD WARRIORS
As I’ve just inducted Demolition into my Hall of Fame it only seems fitting to induct the team that many say Ax and Smash took their gimmick from. That, as well as the fact that they dominated tag team wrestling in the 80’s and 90’s.

Hawk and Animal were the only team to win tag team titles in the AWA, NWA, and the WWF, the three big companies at that time. They dominated everywhere they went, and like Demolition they relied on brute force and sheer power.

But as good as these two were, let’s try and forget that doll Rocco, shall we?

So there you have it. Six teams, twelve men. A big thank you to each and every one of them for all the entertainment they’ve given me over the years. Welcome to The Two Sheds Review Hall of Fame.
at June 30, 2016