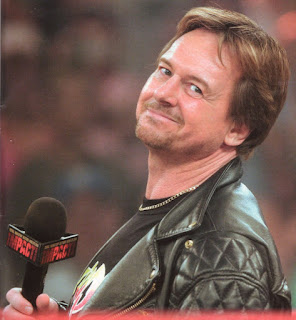 When I heard about the sad death of “Rowdy” Roddy Piper late last Friday night I immediately began to think about the great man’s legendary career, not just as one of the most iconic stars of the wrestling business but of his acting career as well.

I then began to think about my own Roddy Piper story. Sadly I never met the man, and as with many things related to my somewhat brief time in the British professional wrestling business it was a case of “what if” and “almost”.

During my time with the Norwich-based World Association of Wrestling it was my job to try and raise the company’s profile as much as I could. Social media such as Twitter, Facebook, or even MySpace (remember them?) hadn’t even been heard of back then, and it was my job to send out WAW-related news to the extensive list of website and media contacts I’d built up since I first began blogging online in 2000. The list probably contained about 200 e-mail addresses at that time, and my press releases and show reviews were seen all over the world.

From what I gather a certain Rowdy Scot had read some of those reviews, and during one of my regular visits to WAW’s headquarters in Norwich (otherwise known as Ricky & Saraya Knight’s house) they told me that the great man himself had telephoned them to make preliminary enquiries about coming over to Britain to work for WAW.

As was often the case with the powers that be they put the cart before the horse and immediately began making plans for Piper’s appearance. The sad thing is that those conversations never went past those preliminary stages. No agreements were made, and Piper never set foot in a British wrestling ring.

Needless to say that if those plans had gone further then a Roddy Piper appearance in a British wrestling ring would have guaranteed big money and a tremendous amount of publicity. It wouldn’t have mattered who he’d gone on with, just Piper being there would have been enough, and I dare say that it would have been WAW’s biggest show ever, even bigger than the Fightmare show at the Norwich Sports Village back in 2001.

I would have loved to have worked with Piper, to have spent time with him, to have interviewed him for my blog. Piper is one of the reasons I got into the American wrestling scene back in 1989. To say he was one of the most charismatic wrestlers I’ve ever seen would be an understatement. He’s also responsible for one of my favourite film quotes of all time. You know, the one where he talks about bubblegum.

Now the Rowdy One has gone, passed away at just 61 years of age. He’ll forever hold a place in the hearts of wrestling fans around the world.