The Greatest Gift My Dad Ever Gave Me 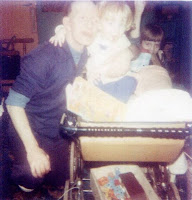 A few days ago I saw a link to an online article entitled “Three Gifts My Dad Gave Me”. I didn’t read the article, but with Father’s Day approaching I began to think about the best things my late Father ever gave me.

There was, of course, his unconditional love. That’s something I never took for granted. There was the encouragement he gave me to become a writer, and there was his infectious love of the wrestling business. His strong work ethic, and his willingness to work his backside off so he could provide for his family, or his view that families should always stick together, that they should always stay in touch with each other, no matter what.

But there’s always been one thing that Dad gave me that I will always cherish, and there’s quite a sad story behind it.

It was in late 1990, a few weeks before my 19th birthday. My Dad didn’t have much money, and he was worried about what he could get me for my birthday. There was one thing that he probably prized above others at that time, and that was his dog.

We’d got Shane, a Yellow Labrador, in 1987 as a companion for our other dog, a Border Collie named Shep. But because Dad worked various shifts and was out of the house at odd hours I was given the responsibility of looking after Shane. I fed him, took him out for walks, and generally made a big fuss of him. He slept on my bed, and I often woke up with the big idiot lying on my right arm.

We nicknamed Shane “Piggy” because whenever he was happy he made the sort of noise a little piglet would make. In fact we actually called him Piggy more than we did Shane.

Back to the story. Dad was worried about what he could get me for my birthday. I told him that I didn’t want anything fancy, that there was one thing he could give me, and that was Shane.

A few seconds later I officially became Shane’s “owner”, although I use that term lightly because Piggy wasn’t a pet, he was a member of our family. I don’t remember what happened next, but I probably gave the old man a hug or a kiss or something.

We didn’t know at the time that Dad was dying of lung cancer. He was diagnosed a few years before and never told anyone. He passed away just over six months later. Looking back it’s obvious that he knew that he wouldn’t be around much longer and that he wanted someone to look after Piggy for him. Mind you, if he hadn’t made that gesture I would have taken on the responsibility without a moment’s hesitation.

Piggy passed away in November 2001, a few days before my 30th birthday. We had 14 great years together, although he suffered from quite a few health problems in his final few months, problems that weren’t helped when his best friends Shep and Sam, our big black cat, passed away as well.

I will always be grateful for the gesture the old man made that day in 1990. It was the best present he ever gave me.

Rest in peace Dad, and Piggy.