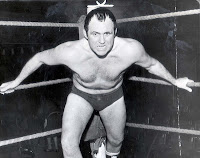 We live in an era where the word “legend” is bandied about far too easily. Those who haven’t really done that much in their chosen profession are happy to adopt this particular moniker, even though they hardly deserve it. However, one man who deserved this title was Mick McManus.

In an era when British wrestlers were as iconic as their counterparts in the entertainment industry McManus was one of the biggest icons. Alongside the likes of Big Daddy, Giant Haystacks, Kendo Nagasaki and Rollerball Rocco McManus was a regular on our television screens for more than 20 years.

Although he was never the biggest dog in the fight he was one of the most cunning. He was one of the best villains British wrestling has ever seen, the kind of man who could have you screaming for his blood by doing the simplest of things. He didn’t need to hit his opponents with a chair, he didn’t need to kick them below the belt. A simple barbed insult to those sitting in the front row was often enough for him.

Away from the ring he couldn’t have been more different. During my time in the British wrestling business those who knew him told me of how he was the perfect gentleman.

I almost had the chance to interview him once. A few years ago when my brother Paul was working for a business magazine publisher a chance phone call led to a brief conversation with the man himself. Paul gave him my phone number, telling him who I was and what I did. A few days later my phone rang, and this lifelong wrestling fan marked out big time when I found out that Mr. McManus was on the other end.

As others had told me he was the perfect gentleman. We briefly discussed what I did and what I was doing in the wrestling business before we spoke about the interview. He said he’d call me back in a few weeks so we could discuss things further. Sadly that call never came.

I’ve met quite a few wrestlers from the World of Sport era, and they’ve all been perfect gentlemen, the kind of people who treat everyone with respect, no matter who they are or what they do. Sadly I can’t say the same about some of the others I’ve encountered in the wrestling business.

Mick McManus passed away earlier this at the age of 93. Despite his advanced years his passing came as something of a shock, and it said a lot about the man and his standing that his death was reported by all the major news networks here, including Sky News and the BBC. The tributes I’ve read have all backed up what I experienced personally.