If Only They'd Look at My CV 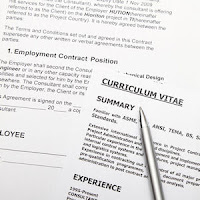 To begin this story I need to tell you a little about the past few years of my life.

Ten years ago I had to give up a job I loved because of ill health. I won’t go into details here but all I will say is that I was kept on the shelf for almost three years until I was given the all clear to return to work in the early part of 2005.
The only problem was that I didn’t have a job. Even though I had an excellent CV, good references and years of experience in the retail industry employers weren’t exactly crawling over each other to give me a job.

I managed to get a few jobs, working as a steward at Carrow Road, as a supervisor in my local newsagents before head office closed down, and as an operations assistant for Boots in Castle Mall. The only problem was that these were all temporary jobs.

Then the economic bubble burst. I saw an immediate change in the jobs market. Before I got the Boots job in 2007 I was attending up to five interviews a week. In 2008 I was lucky to get one a month. A knee injury which required surgery and put me on the shelf again for three months didn’t help matters much.

So having been on the much-maligned Flexible New Deal program from 2010-11 I was back to square one.

I was now at the stage where I had to visit my advisers at the Job Centre twice a week. It was during one of these visits that they suggested I try some volunteer work in order to beef up my CV a little, to show possible employers that I wasn’t just sitting around on my backside all day watching Jeremy Kyle. It’s something I’d done before at one of the local charity shops during my time on the Flexible New Deal program.

I considered my options and began to do a little research on the internet. The idea of volunteering in a local museum appealed to me for some reason. Museums in Norwich and the surrounding area were out of the question because I don’t drive and I’m on a limited budget.

So I began to look more locally and e-mailed a number of local attractions asking if they were looking to take on any more volunteers. Those slightly further a field didn’t bother to reply. Once local museum replied saying that they didn’t take on volunteers.

Step forward Henry Blogg, Cromer’s most famous son. Or rather the museum dedicated to him.

A few days after I’d sent those e-mails Jacqui Palmer, the boss of the Henry Blogg Museum on the Cromer sea front telephoned me asking me to come in for a chat.

To cut a long story short I filled in a form, my CV and references were checked over, and a couple of weeks later I was standing on the first floor overlooking the legendary H.F. Bailey lifeboat while wearing a volunteers badge.

It’s been nearly three months since I began. I’ve learned a huge amount about the history of the Cromer lifeboat. I’ve met some great and not so great people, and I’ve really enjoyed myself.

Jacqui and her team of volunteers have made me feel more than welcome, and even though I only volunteer one afternoon a week it’s great to be back in the swing of things.

Getting the volunteer’s gig at the museum made me realise that there is nothing wrong with me as a person. When you spend a great deal of time applying for countless jobs and hear next to nothing from employers about why you didn’t get the position it can be a little soul destroying, and when Jacqui told me she’d taken me on on the strength of my CV and my references it certainly lifted my spirits.

It made me wonder though what would happen if employers actually bothered to look at my CV. All I’ve ever wanted is a chance to prove myself, to prove what I can do.

I’m just grateful that someone has given me that chance by checking the facts. I can only hope that someone will follow Jacqui Palmer’s example and do the same with my countless job applications.