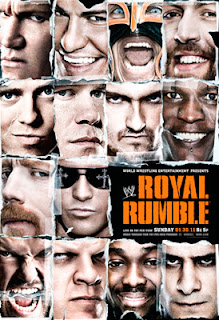 It was WWE’s first pay-per-view of the year as 40 men tried to take the first step on the road to Wrestlemania in the biggest Royal Rumble ever, shown live in the early hours of this past Monday morning on Sky Box Office here in Britain.

It’s not often you see a main event match as the show opener, but that didn’t stop these two from putting on a great match.

Ziggler really upped his game for this match as he showed he can hang with the big boys, while the champion put in his usual solid performance.

As well as the great exchanges we also got Kelly Kelly attacking Guerrero after she stopped a count, and Edge taking Ziggler down with a spear while the referee was taking a snooze. Edge then borrowed Christian’s un-prettier to finish Ziggler off for the title retaining pin.

Then it was on to the other match that would normally have been in the main event slot as Randy Orton challenged the Miz for the WWE title.

It’s no secret that I think that Orton has been in some real stinkers over the past couple of years or so, but his work as of late is starting to grow on me.

The bout featured two solid performances in what was an engaging back and forth encounter. Of course, there were also occasional appearances from Miz’s buddy Alex Riley as he lent a helping hand now and then.

But just when Orton looked like he was about to win the title the new Nexus walked down the ramp, and while the referee tried to stop them from entering the ring Riley tried to attack Orton from behind, only for the viper to throw him over the top rope onto the Nexus boys.

Then, after he took Miz out with the RKO C.M. Punk came through the crowd and took Orton out with the GTS, dragging the Miz onto the prone Orton. A three count later and the Miz had retained his title.

The Divas title match followed. Originally it was meant to be Natalya defending her title in a handicap match against Layla and Michelle McCool. Then, the mystery Raw general manager stepped in, adding Eve to the mix and turning it into a fatal four way.

The Divas were certainly entertaining this month. It may have seemed little more than filler material but that didn’t stop all four girls putting in good performances.

There was a bit of controversy at the end though. As Eve pinned Layla after a moonsault McCool was pinning Natalya with a roll-up in the opposite corner. However, the referee didn’t see that pin while he was counting Eve’s cover as she took the winning pin to become the new champion.

The main event, the 40 man Royal Rumble, was next.

There was a bit of a bother at the start. After C.M. Punk had been introduced as the number one entrant Wade Barratt and his new Corre faction came down to the ring. This brought the new Nexus out, and as a mass brawl erupted the mystery Raw GM ordered everyone except Punk out of the arena, threatening them with disqualification from the Rumble if they failed to leave. When they were finally herded out of the way the number two entrant Daniel Bryan entered the fray.

As for the Rumble match itself, it has to be one of the best I’ve ever seen, and there are many reasons for that.

First thing of note was John Morrison’s Spider-Man impression, pushed off the ring apron by William Regal and clinging to the ringside barrier, his feet failing to touch the ground, re-entering the match by jumping onto the ring steps.

Then there was the appearances of Booker T and Diesel. They may not have lasted long but the pop they got was tremendous.

Storyline-wise it was all about the Nexus. At one point Punk and his cronies controlled the entire match, and even when the Great Khali eliminated Husky Harris the next man out was new boy Mason Ryan. However, it wasn’t long before John Cena entered the fray and cleared house.

Sadly, we also got an appearance from Hornswoggle, as annoying in WWE as Eric Young is in TNA.

The controversial moment came when Alex Riley came back down to the ring to distract John Cena, which led to him being eliminated by the Miz, who entered the ring from his commentary position.

The final two were Alberto Del Rio and Santino Marella. Yes, you read that correctly. Marella had been thrown under the bottom rope and had remained on the floor while Del Rio saw off Randy Orton and Wade Barratt.

As Del Rio celebrated what he though as his victory Marella got back into the ring and took his man down with the dreaded cobra. It wasn't enough though as Del Rio eliminated him seconds later to book his spot in the main event at Wrestlemania.

In conclusion - I must admit that when I heard that this year’s Rumble match would feature 40 entrants I didn’t think they’d be able to keep the action flowing for the entire match.

Well, they did it. The match delivered in each and every way, and in the end Alberto Del Rio proved to be a worthy winner. As for the undercard, no complaints there.

SO in all WWE’s first big event of the year gets the big thumbs up from me. Let’s hope they can keep this momentum going.
Posted by Julian Radbourne at 23:41:00