The Dawning of the New Age - Chapter Two 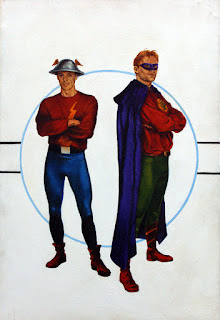 March 8th. An R.A.F. Mosquito aircraft flies over the Atlantic Ocean, en-route to a drop-off point. Apart from the usual crew this aircraft also carried four important passengers, Dr. Magus, Connor McCloud, Captain America and the Human Torch. Of these four passengers Magus was the most irritable.
“I would have preferred to levitate to the ship.” said Magus. “This mode of transport can be very slow.”
“I disagree Doctor.” said Captain America. “I think the crew of the Valkyrie would be shocked if we just appeared on their deck.”
“Tell me Captain.” said McCloud. “Who are these associates of yours we’ll be meeting on the Valkyrie?”
“Two members of our sister group.” replied Captain America. “You may have met them before.”
Then a call came through from the cockpit.
“We’re reaching the drop-off point gentlemen.”
Upon hearing this McCloud and Captain America strapped on their parachutes. Magus began to shake his head.
“You could at least let me levitate you to the deck of this ship!”
“Will you let me have some fun Phineas?” smiled McCloud. “I haven’t had a parachute jump in years!”

And so the time came for them to leave the plane. The side hatchway opened, and McCloud and Captain America jumped out, their parachutes soon opening. They were soon followed by Magus and the Torch, who chose to fly out under their own steam.
McCloud and the Captain soon splashed down into the water, and a few minutes later they were picked up by a small boat from the Valkyrie. Magus and the Torch soon joined them in the boat. A short time later they were being helped onto the Valkyrie’s deck where they were greeted by a tall man with a black beard, wearing a blue navy sweater.
“Welcome aboard gentlemen. I am Captain Hector Watt, commanding officer of H.M.S. Valkyrie!”

Half an hour later, as McCloud and Captain America dried themselves off in Captain Watt’s cabin a knock sounded on the door.
“Come in!” called McCloud.
The door opened and two men entered. One was wearing what appeared to be a metal hat and wore a red and blue costume with a yellow bolt of lightning on the front. The other man wore a green mask, and also wore a red costume, but had a long green cape flowing behind him. Captain America smiled as he saw them. He got to his feet and shook both of them by the hand.
“Flash! Green Lantern! It’s good to see you again!”
“Likewise Cap!” said Flash. “I only wish it could have been socially instead of on this ship!”
“Gentlemen, this is Connor McCloud of Anglo-Force.” said Captain America.
McCloud got to his feet and shook Flash and Green Lantern by their hands.
“We’ve just met your friend the Doctor up on deck.” said Green Lantern. “He doesn’t look like he’s up to this job. Are you sure it was wise to bring him along?”
“Phineas may look old but he’s probably more powerful than all of us put together!” said McCloud.
“Well, we just came to tell you that Captain Watt has called a meeting in the mess hall for nineteen hundred hours. He wants to discuss this thing with all of us.”

That evening the mess hall didn’t resemble a mess hall at all as Captain Watt laid out countless maps on the tables, most of them showing where German ships and U-Boats were last seen.
“It is my guess that this man, whoever he is, is operating from one of the U-Boats in the Norwegian sea.” said Watt. “It would be quite easy for a U-Boat to surface so he could fly out, or whatever it is he does.”
“Your theory seems feasible.” said Captain America. “But how can we find out which one?”
“There is one possibility.” said Watt. “At the times when the Enterprise and the Lohengrin were attacked the U-Boat Scharnhorst was known to be nearby.”
“That proves nothing.” said Magus. “This man can fly, so he could be operating from anywhere in the area.”
“But even as you know, Doctor, we can’t continuously use our powers.” said Flash. “There are times when we must rest.”
“But I still don’t think this has anything to do with the Germans.” said Magus. “It’s as if a power even greater than Hitler’s is controlling this somehow.”

March 10th, and H.M.S. Valkyrie is assigned to provide safe passage for a troop carrier leaving England and heading for North Africa. The troop carrier left Southampton and met with the Valkyrie just past the English Channel.
“Are you sure this is wise Captain Watt?” asked McCloud. “This mission may be just the diversion the attacker needs now we are out of the area.”
“I’m just following orders, Mr. McCloud, the same as you.” said Watt. “And there are reports that the Scharnhorst was moving south towards Africa.”
The rendezvous passed uneventfully. A few hours later a spotter plan reported seeing the U-Boat ahead of the Valkyrie, and they were warned of this. However, early next morning the Valkyrie crew saw the submarine ahead of them. It seemed to be drifting. Watt alerted the others and they soon joined him on deck.
“I can’t see anyone above.” said Watt, looking through a telescope. “It’s as if they’ve just left her.”
McCloud looked at the drifting ship, and then turned to Magus.
“What’s wrong Connor?” asked Magus.
“Can you sense something?” McCloud asked.
“Now you come to mention it, I can.” said Magus. “Some sort of presence. As if…Green Lantern, Torch, would you like to join me in looking over the submarine?”
“Certainly Doctor.” said the Lantern.
And with that the three of them took to the air, leaving McCloud, Captain America and the Flash on the deck behind them. Captain Watt looked a little uneasy.
“I’ll never get used to seeing a man fly!” he smiled.
The three of them neared the U-Boat and flew around it a few times. Then the Lantern made a giant ear with his ring in an attempt to hear sound from within the craft.
“I can’t hear a thing.” he said. “What about you?”
“Nothing.” said the Torch. “But can’t you smell that burning?”
“Yes, as if there’s some sort of fire inside.” said Magus. “I shall investigate.”
Magus then landed near the hatchway. Reaching down he went to turn the door wheel but suddenly sprang back.
“What is it?” asked Green Lantern.
“The door is red hot.” Magus replied.
Green Lantern hovered over the doorway, and again using his ring he opened it. As soon as the door opened smoke came billowing out. The smoke hit Green Lantern right in the face, and he started to cough. Magus then entered the submarine, and using a spell made all the smoke dissipate. A few seconds later Green Lantern and the Torch entered. Magus cast another spell, providing them with light. The sight that greeted them shocked them.
“I don’t believe it!” said the Torch. “Everyone, and everything, is burned to a crisp!”
“There’s only one person I know who could have done this.” said Magus. “And you’ve been with us for the past few days. No, I believe my suspicions were correct. Why would someone working for the Germans attack one of their own submarines?”
Then they heard shouting nearby. The three of them made their way to the hatch and left the submarine. What they heard was the battle stations alarm being sounded. They looked up to the sky and saw a red and yellow streak flashing across the sky.
“It looks like our friend has returned!” said Magus.